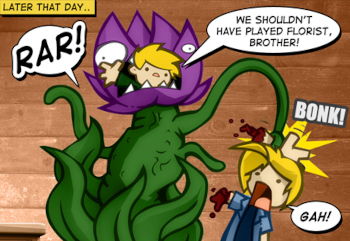 "This is a bad experiment! We are bad people!! WHY DID WE USHER FORTH THE GREEN APOCALYPSE!?"
— Gordon Freeman during the Resonance Cascade, Freeman's Mind
Advertisement:

The basic setup is simple: You have an outpost, a laboratory, a factory, or other facility dedicated to the research and production of technological marvels, staffed with flighty scientists and ambitious persons pursuing a goal with the aims of profit, peace, or other potential applications. Did we mention that the research is on cheating death, or that the forest that those free-market capitalists are clear-cutting just happens to be rumored to have an ancient Indian Burial Ground somewhere within it?

In the course of their reasonable, maybe even noble quest to advance scientific knowledge, make a profit, help humanity, design a doomsday device, or otherwise undertake a high risk/high reward venture, something will have gone horribly wrong.

The variations are endless. Perhaps the non-polluting energy source actually taps into the delicately balanced forces locked in a Cosmic Keystone or drains the planet's Life Energy, or the hunger-killing super-wheat is actually a super-weed that destroys all ecosystems — and that's for purely peaceful things. Weapons of any sort will have things go horribly wrong on a cataclysmic scale. The "completely loyal" robot workforce has a programming flaw that makes them revolt. Maybe the Super Soldier program inherently causes insanity, rebellion, or plain old megalomania.

These researchers will observe lax safety standards, laxer morals, and be prone to test things out on themselves or unwilling visitors. The Corrupt Corporate Executive will callously and maliciously disregard all warnings, even for basic safety and good PR.

Expect these people to send out a Distress Call or chronicle the debacle in an Apocalyptic Log, be visited by a group whose car broke down, or have things go wrong when the stockholders/government oversight committee comes to view their achievement.

If someone In-Universe is overconfident enough to ask "What Could Possibly Go Wrong?" unironically, expect something to Go Horribly Wrong the moment the question is asked out loud.

This is comparable to a Freak Lab Accident, except at the beginning of a story. Heck, a lot of Speculative Fiction serves no purpose but to have something Go Horribly Wrong.

See also Came Back Wrong for when an attempt at bringing someone Back from the Dead Goes Horribly Wrong. For when the experiment would be successful but is deliberately sabotaged, see Spanner in the Works. In more cynical works, this may leave the character thinking "My God, What Have I Done?". When Gone Horribly Wrong results in a project or product being scrapped immediately after its debut, it's a Disastrous Demonstration.

Of course, it can always get worse.

Compare with Gone Horribly Right, where the project in question does whatever thing/task it was intended to do, often with flying colors, but does it in a way that is really, really, really, really fear-inducingly horrible enough to make its creators want to stuff it into a can and bury it anyhow. An Epic Fail is this being Played for Laughs.