This page is for listing the tropes related to Antagonists who first appeared in the original Mass Effect game. Some spoilers will be unmarked. Read at your own risk. 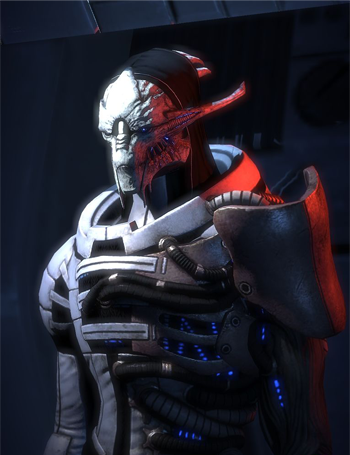 The primary antagonist of the first game, a former Spectre agent turned rogue, who takes control of an army of geth and sets out to find an artifact known as "the Conduit."

Did we forget to mention that his theme song is also the Game Over music? 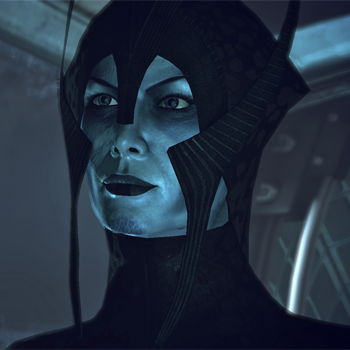 Your insolence is a poor mask for your fear.
"Have you ever faced an asari commando unit before? Few humans have."
Voiced by: Marina Sirtis

A powerful asari matriarch who acts as Saren's partner. She is also Liara T'Soni's mother. 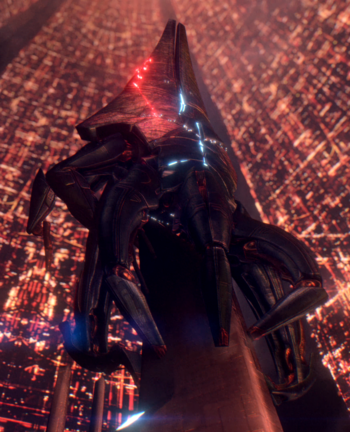 I am Sovereign! And this station is MINE!
"We impose order on the chaos of organic evolution. You exist because we allow it, and you will end because we demand it."
Voiced by: Peter Jessop

The immense vessel belonging to Saren. He speaks in all caps on This Very Wiki. One of the Reapers, which is controlling Saren and using him to find the Conduit in order to open the way for a massive Reaper invasion of the galaxy.

A pro-human former Alliance black ops group with the aim of advancing humanity's role in the galactic community. Due to disagreements with Alliance command, they eventually went rogue and became an N.G.O. Superpower in their own right.

They appear in a Sidequest Sidestory in the first game, where they are experimenting on rachni and Thorian Creepers, aiming to create super soldiers; they're also believed to have a hand in the traumatic first encounter between humanity and Thresher Maws on Akuze, and they kill an Alliance admiral who was asking too many questions.

They return in the second game, where they bring back Shepard after his death with the Lazarus Project, in order to stop the Reaper threat. There, they serve as Shepard's main financial backer, rebuilding the Normandy, giving Shepard's team custom weapons, providing intelligence, and paying Shepard after each mission.

In the third game, they turn on Shepard and effectively declare war on the galaxy in their attempt to control the Reapers using ancient technology found on Mars. 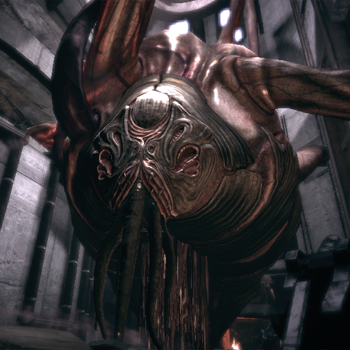 You are within and before the Thorian. It commands that you be in awe!
"Invaders. Your every step is a transgression. A thousand feelers appraise you as meat, good only to dig or decompose."

A sentient alien plant that lives underground on the planet Feros. It is capable of controlling other sentient beings with the spores it produces by using behavioural conditioning to reshape their minds through the crippling pain. Malicious and seeing all other life, sentient or otherwise, only in terms of potential thralls, it makes a deal with Saren that goes way far south. "We are all connected. Every living being united in a single glorious existence."
Voiced by: Gwendoline Yeo

An asari who followed Matriarch Benezia when she allied herself with Saren. She was later sacrificed to the Thorian in exchange for its knowledge of the Conduit and was ultimately freed by Commander Shepard. Due to the unique mind meld she experienced as the Thorian's thrall, she is the only known person to have completely recovered from the effects of Reaper indoctrination.

Ethan Jeong
Ethan Jeong
"I like people. I just like them better when they're helping ExoGeni's profits."
Voiced by: Rick Zieff

The last remaining ExoGeni Corporation representative left alive on Feros. Held up with fellow survivors on the Sky Way, he knows much more about the sinister goings-on at ExoGeni than he's willing to reveal. 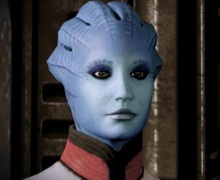 "I didn't have the option of negotiating! This position is a little more... permanent than I'd expected."
Voiced by: Belinda Cornish

An asari neurospecialist working for Saren. 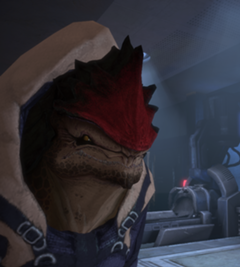 "This is the glorious salvation of my species!"
Voiced by: Gord Marriott

A krogan researcher in charge of supervising the breeding grounds at Saren's base on Virmire. It's unclear whether he was indoctrinated or whether Saren had promised him a cure for the genophage if he helped out. 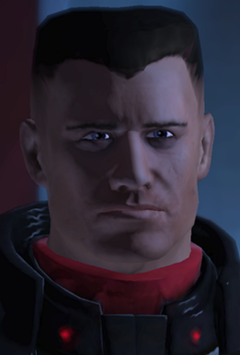 "Shepard? I heard you were dead! I had a party and everything!"
"Voiced by: John Wright

A small-time crime boss who owns Chora's Den. Formerly an agent for the Shadow Broker, but betrays his boss to work for Saren. Shepard confronts him while looking for evidence to prove Saren's guilt, and has the choice to kill or spare him. If he's spared, Fist shows up in the second game where he shows how far he's gone down. 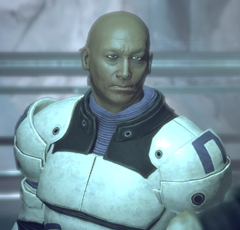 Security chief for the Peak 15 research facility on Noveria. Shepard runs into him while looking for Benezia. It later turns out that he's working for Benezia and that he's under orders to kill Shepard. 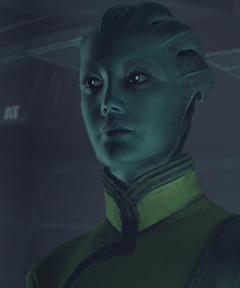 A member of the science team at the Peak 15 research facility on Noveria. At first appearing to be just a scientist, she later turns out to be an asari commando under orders from Benezia to eliminate Shepard. 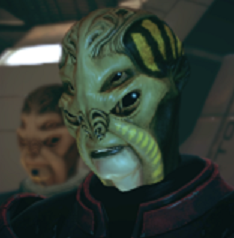 Who's the real terrorist here?note You, but you're dead.
"Those charges are still on a timer. Better hurry if you want to save your friends."
Voiced by: Fred Tatasciore

A radical batarian terrorist that serves as the main antagonist of the Bring Down the Sky DLC. He seeks to reignite the war between the Alliance and the batarians by crashing an asteroid into an Alliance colony. 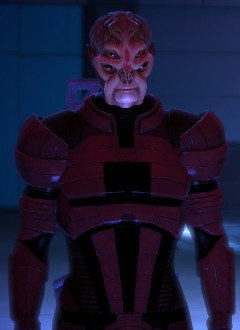 "This was supposed to be a simple slave run."
Voiced by: Jason Singer

Balak's main lieutenant in Bring Down the Sky. 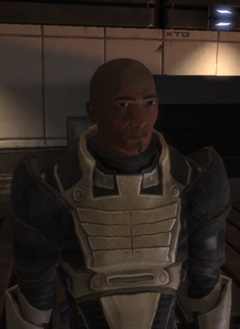 "You think you can take me down? I've killed worse than you!"
Voiced by: Townsend Coleman

A warlord supplied by the Alliance to clear out the Skyllian Verge of the batarians. After doing so, however, his extortion of Element Zero led them to abandon him. If Shepard is mostly Renegade aligned, Admiral Hackett sends her/him to negotiate with Darius, but it soon becomes clear that it's a set-up. 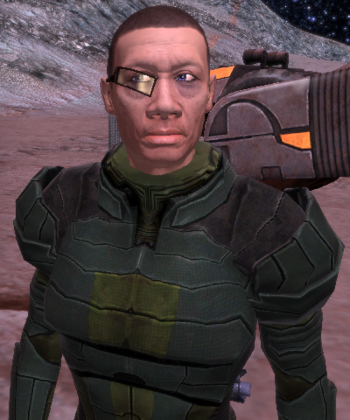 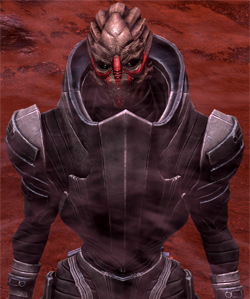 His model in Legendary Edition
Voiced by: Gary Anthony Williams

A pirate operating in the Terminus Systems, Haliat is the one who organized the Skyllian Blitz; after it failed, he was disgraced and went into exile. If Shepard has the War Hero background, Haliat is familiar with her/him, blaming Shepard for his disgrace. 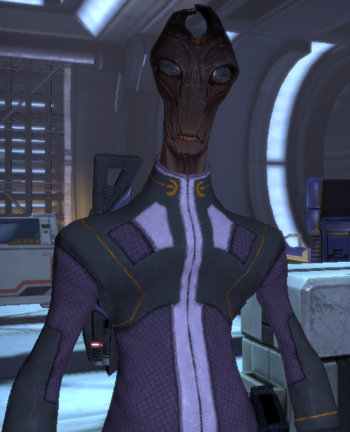 Garrus's "That One Case": a corrupt salarian geneticist who used people as living organ banks. He fled the Citadel on a ship carrying hostages, and C-Sec countermanded Garrus's order to Shoot the Dog. You can find and confront Saleon, now going by "Doctor Heart", in a side-quest Garrus offers. 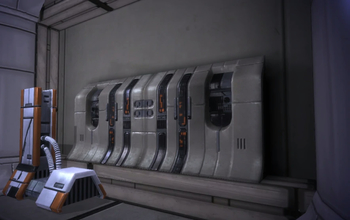 I am not naïve, human. All organics must destroy or control synthetic life forms.
Voiced by: Brian George

A rogue AI on the Citadel which is the culmination of the "Signal Tracking" side quest.