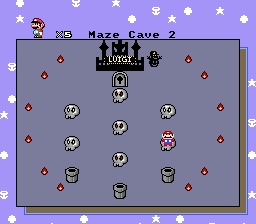 Once you see this submap, the game becomes much darker.

Fan works with their own pages