Western Animation / The Ren & Stimpy Show
aka: Ren And Stimpy 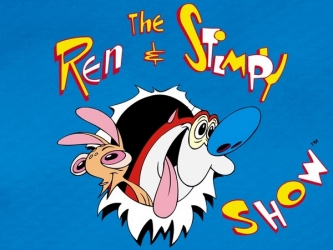 Who in their right minds would give a mainstream animated series to John Kricfalusi, the enigmatic Canadian animator known for causing chaos throughout the '80s with his attempts in putting out a grotesque, almost obscene animation style which played up every body hair, pimple, bulging vein, oozing sore, lump of unsightly fat, and pock-marked butt cheek whilst proudly flaunting around showing off the most disgusting and disturbing parts of internal anatomy?

Well, Nickelodeon did, and the result was The Ren & Stimpy Show, which detailed the adventures of a inverted version of the cat and dog duo, consisting of the smart, yet mentally unbalanced and psychopathic chihuahua named Ren Höek and his feline sidekick, a cheery but moronic tomcat named Stimpson J. Cat who can make Ren angry with his eediocy.

The show was over-the-top in every way imaginable: in its visuals, even traditional Animation Tropes were taken up a notch; characters frequently Temporarily Atomise things the size of a nuclear submarine and Non-Fatal Explosions generally take out at least one state. Even its dialog was pulled Up to Eleven — Ren didn't so much talk as scream threats and insults in other people's faces. And that's not even counting its macabre tone — in The Ren & Stimpy Show, even a standard sitcom plot such as "Ren is jealous that Stimpy has a fan club" could become a tale of operatic angst and rage. And just when you thought you've seen everything, it gives us an almighty Tear Jerker tale about a sentient fart cloud!

One of the first three Nicktoons, which premiered alongside Doug and Rugrats on August 11, 1991, and third to premiere, Ren & Stimpy broke the mould in many ways: Kricfalusi and his crew were relentless in their ambition to diverge from the banal, cheaply-animated and moral-heavy programming they despised working on for years by setting out to make cartoons funny again. Plots for episodes were devised using storyboards rather than written scripts (modelled after how Golden Age cartoons had been made) and emphasised the layout stage to allow focus on visual humour and expressive character acting, inspiring many other successful shows in its' wake - such as Rocko's Modern Life, Dexter's Laboratory, The Powerpuff Girls, and Spongebob Squarepants - to follow its example. Meanwhile, its... ahem, infamous imagery pretty much invented the Grossout Show genre.

However, friction between Nickelodeon execs and Kricfalusi — mostly over Kricfalusi's attitude and penchant for late work — eventually led to his removal from the show in 1992. Production was then absorbed by Nickelodeon itself (via its inhouse studio Games Animations) as most of the original staff gradually left in disgust over Kricfalusi's firing. The show was cancelled in 1996 after a total of 94 episodes.

The series lived on through a Marvel Comic Book series published from 1992 to 1996, alongside a brief early-2000s reboot (with Kricfalusi on board) for adult audiences called Ren & Stimpy "Adult Party Cartoon", which is... well, polarising, to say the least.

of the show is currently in development at Comedy Central, being produced by Nickelodeon Animation Studios with Billy West once again voicing the titular characters; this will be the first Nickelodeon show produced for Comedy Central. In light of statutory rape allegations made against him in 2018, it was confirmed that Kricfalusi is not involved in the reboot.

An unauthorized tell-all by Thad Komorowski entitled Sick Little Monkeys: The Unauthorized Ren & Stimpy Story was published in 2013. A documentary, Happy Happy Joy Joy: The Ren and Stimpy Story, which features new art and animation by many of the original artists who worked on the show, was released in 2020.

Ren and Stimpy appear in Nickelodeon All-Star Brawl as a duo of simultaneously controlled playable characters, alongside Powdered Toast Man as a separate fighter.

Tie in Media with their own trope pages:

open/close all folders
Tropes A-H
Tropes I-Q
Tropes R-Z
"Our country reeks of trees!
Our yaks are really large.
And they smell like rotting beef carcasses.
And we have to clean up after them
And our saddle sores are the best
We proudly wear womens' clothing
And searing sand blows up our skirts
And the buzzards, they soar overhead
And poisonous snakes will devour us whole
Our bones will bleach in the sun
And we will probably go to "BURP!" [hell]
And that is our great reward
For being the-uh roy-oy-al Canadian Kilted Yaksmen"
Feedback

Example of:
Fur Is Clothing