For the Marvel characters, try here.

For the characters introduced in Ultimate, go here. 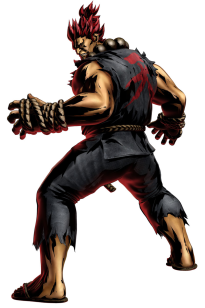 This warrior values strength above all else, going so far as to abandon his own humanity as a means to obtain more. It is said that the Buddhist beads around his neck represent warriors who have fallen before him. He wants Ryu to give in to the dark force known as Satsui no Hadou so that he may have a Worthy Opponent.

Akuma's fighting style is different from Ryu's. He uses more simplistic combos, and he is meant to be played in a more offensive manner, akin to his Street Fighter IV incarnation. He is a Glass Cannon who can deal huge amounts of damage with and without meter. 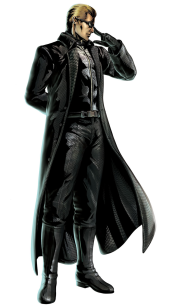 Wesker was the leader of the S.T.A.R.S. Alpha team, but was secretly working for the Umbrella Corporation, whom the unit was sent to investigate. He has since betrayed Umbrella and, after a series of encounters with many acquaintances (most of which hate him), works for Tricell. With his constant experimentation of the T, G, Las Plagas, and Uroboros viruses, he has superhuman strength, speed, reflexes, and regeneration, making him a force to be reckoned with. His ultimate goal is to release Uroboros into the Earth's atmosphere, and leaving only the chosen few alive for him to rule over as their god.

His fighting style incorporates teleport mixup and show-offy, yet intricate combos involving the gamut of fighting game tech - wallbounces, OTG, you name it. 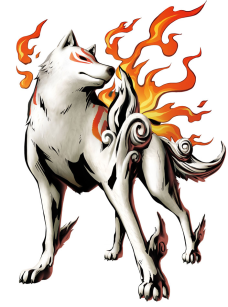 The Shinto sun goddess in the form of a white wolf. She uses her power to restore peace and beauty to the lands.

Amaterasu is an excellent all-around character who has three weapon styles at her disposal: the reflector, the glaive, and the rosary. While it is possible to win by using just one style, true mastery of Ammy requires utilizing and switching between all three styles, and learning how to use her for both rushdown and keepaway tactics. 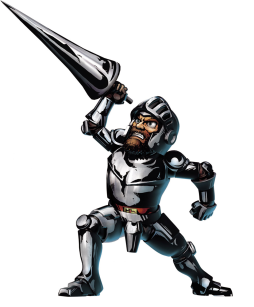 Sir Arthur is a brave and valiant knight who goes into hell to save his beloved Princess (Princess Prin-Prin, Princess Guinevere or whichever name your game manual says this time around). He also has a tendency to lose his armor with one attack. (Fortunately, this doesn't happen in this game.)

Arthur is a pure zoning character. His walking speed is slow, he does not possess a dash, and his damage output is not that great. But what he lacks in all of that he makes up for by filling the screen with projectiles, as well as various other ways that he can put distance between him and his enemies. 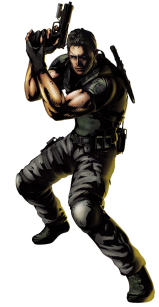 Part of the S.T.A.R.S Alpha team, Chris was one of the first to see the horrors of the Umbrella Corporation. He's one of the original 11 founders of the B.S.A.A., designed to deal with Umbrella-like threats. 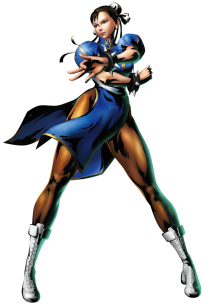 An undercover Interpol detective with lightning fast kicks, Chun-Li seeks to avenge her father's death at the hands of the criminal organization Shadaloo. 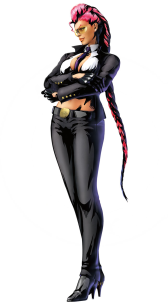 Real name: Maya. This worldly 30 year old fighter is an expert CIA agent, going undercover to expose the S.I.N. organization's crimes. She is also a single mother and her daughter, Lauren, is on her mind at all times. 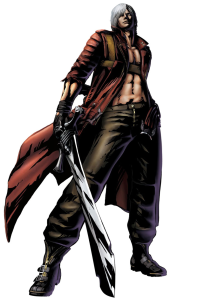 Dante is a hunter dedicated to vanquishing demons, which were responsible for killing his mother and corrupting his brother Vergil. He is also half demon himself, the son of the demon knight Sparda.

Dante has the most versatile and complicated movesets of any character in the game, and is able to perform pretty much any strategy you would need, such as mixups, crossups, rushdowns, and zoning, making him a threat to any and all characters. He has average stamina and damage output, but high combo potential. 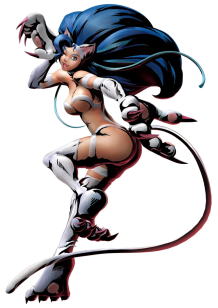 A cat woman raised by nuns, Felicia left the convent and is on a quest to become a superstar.

Felicia's rushdown fighting style takes full advantage of her cat-like agility. She works best by pressuring her enemies with a devastating series of super-quick attacks (which have the added benefit of still being fairly strong hit-for-hit in the process). 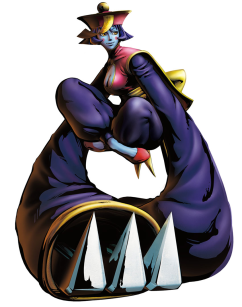 In a Darkstalker attack on their village, Hsien-Ko’s mother gave her life to save her family. After these events, Hsien-Ko and her sister Mei-Ling have turned themselves into jiang-shi in order to fight for the return of their mother’s soul.

Although she's quite low on the tier listing, she's one of the best characters for support, as her assists are very powerful and versatile, especially when powered up with her Rimoukon Hyper. She can also help with closing distances with someone zoning against you, a rarity. Otherwise, she's incredibly awkward to use, but powerful in the right hands. 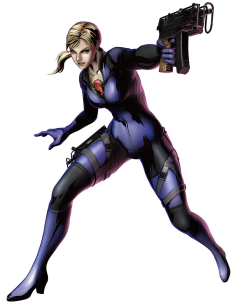 Jill was a member of the S.T.A.R.S Alpha Team, along with Chris Redfield. Surviving the Raccoon City Incident and an attempt on her life by the Nemesis monster, she joined the B.S.A.A. and worked with Chris once more on a mission to find Ozwell E. Spencer, the founder of Umbrella. Encountering Wesker, who had already killed Spencer, she tackled him out of a window to their supposed deaths. Both survived, but Wesker used her as a test subject for Uroboros, and she was brainwashed into becoming his puppet bodyguard. 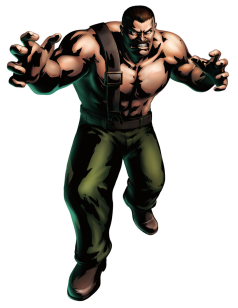 Mike Haggar is a former wrestler and the mayor of Metro City. He often takes to the streets to deal with Metro City's gang problems, especially if it involves his daughter.

Haggar is a slow grappling character who will floor you if he can manage to get in close, making his approach predictable if his opponent is aware of it. He is the only character in the game with an invincible assist, with the trade off being that it costs him a bit of health to use. 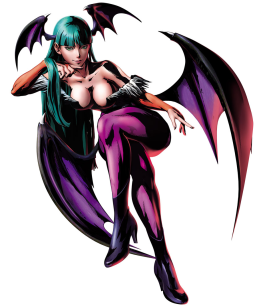 A hedonistic succubus, Morrigan is very powerful and prefers to neglect her duties and instead spend time in the human world. 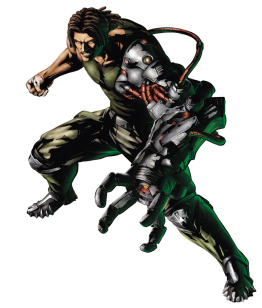 Spencer was a spec-ops soldier working for the government. He became notorious for stopping the resurrection of Adolf Hitler and ending the Bionic Wars. However, the government betrayed him by enacting the Bionic Purge, and he was sentenced to imprisonment. When a new threat arrived, Spencer was released, being the only man for the job. 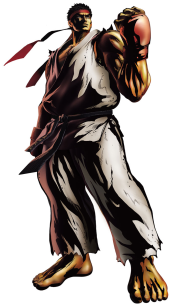 Ryu lives only for the fight and seeks opponents stronger than himself. He fights using the art of Ansatsuken as taught to him by his master, Gouken.

Ryu has a solid, balanced style that is good for beginners, with his potential brought out by players with a firm grip on the core mechanics of the game. 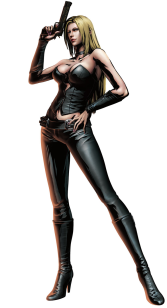 A woman created by the demon Mundus to seduce and destroy Dante. However, she ends up aiding Dante on his quest to vanquish demons. 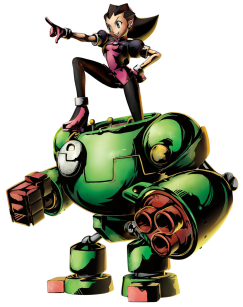 I would give up now if I were you.
Voiced by: Tara Platt (English), Mayumi Iizuka (Japanese)
Home Series: Mega Man
Debut: Mega Man Legends (1997)

A pirate and mechanical genius, Tron Bonne uses her Servbots to do her bidding. She has a love-hate relationship with MegaMan Volnutt. She seeks all the world's riches, but usually ends up getting in debt because of her mishaps. 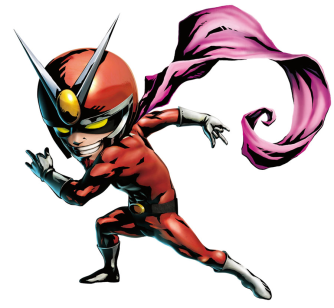 Sucked into Movieland, Viewtiful Joe fights for truth and justice using the time altering powers of his V-watch, which is activated by the magical phrase "Henshin." 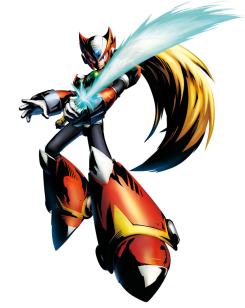 The last creation of Dr. Wily, Zero was awakened by Sigma to fight as a Maverick Hunter. Sigma, however, ended up infected with the Maverick virus, and betrayed his comrades. Zero has on more than one occasion teamed up with Mega Man X to stop Sigma's schemes. He always gets the job done in a cool and confident manner.