For the Capcom characters, go here.

For the characters introduced in Ultimate, go here. 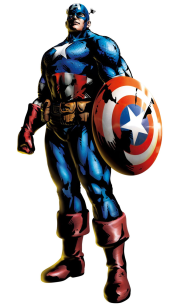 The sole recipient of the Super Soldier Serum, Steve Rogers' deep love for his country and his unparalleled sense of justice make him one of the most respected heroes today. He has also been the long-time leader of the Avengers, a group dedicated to keeping the world safe from harm.

Cap's moveset is cut from a similar cloth as Ryu and Akuma (projectile via his shield, multi-hitting charge in place of a hurricane kick, rising uppercut), but distances himself with his shield toss move pulling opponents towards him and a special movement option to better avoid attacks. He also has an edge over them with his air game, with the aforementioned shield toss and his Ultimate-granted double jump owing to more advanced air combos. 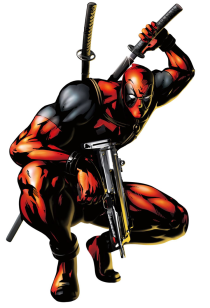 Check me out! I'm the ghost of Christmas Kick Your Ass!
Debut: The New Mutants #98 (February 1991)
Voiced by: Nolan North

After a botched suicide attempt, Wade Wilson was drafted to a secret government training program where medical exams diagnosed him with over 40 cancerous tumors, that couldn't be removed without killing him. To fix this, he volunteered for the Weapon X program to give him a Healing Factor similar to Wolverine's, but it backfired as said healing factor accelerated the cancer and left him with a horribly disfigured face. He was deemed a failure and sent to Dr. Kilebrew, whose extremely cruel tendencies towards his patients drove him insane. He broke out of the Weapon X labs and became a mercenary, calling himself Deadpool because he always won a game he played with inmates over guessing who would die next.

Dark backstory aside, good ol' Deadpool is one of Marvel's most recognizable characters thanks to his humorous personality, craziness, wacky antics and fourth wall-obliterating tendencies. He's a complete Wild Card, switching allegiances frequently and often talking to two voices inside his head. For his appearance in this game, he continues breaking the fourth wall, and generally jamming as much of his craziness into his moveset and quotes as possible.

Gameplay-wise, he's pretty good all-around, but he's really good at keeping enemies away with high-priority bullets and bombs. With good partners, he's also good at locking down the opponent using that strategy, and using "his" Shoryuken as a Launcher Move if they get close. 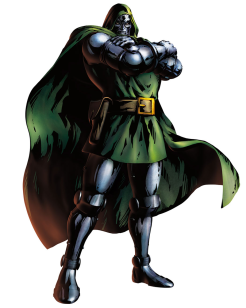 Full name Victor von Doom, this Evil Overlord and Mad Scientist is the Fantastic Four's Arch-Enemy, and one of Marvel's most famous villains.

He used to be an associate of Reed Richards (Mr. Fantastic), but when he helped Doom to open an interdimensional rift into hell to rescue the soul of his mother despite Richards' warnings, the portal blew up in Doom's face, scarring him. He blamed Richards for the whole accident and swore revenge, constructing an advanced suit of armor that included an iron mask to cover his scar, and became Doctor Doom, then overthrew the previous ruler of Latveria and claimed it as his own. He repeatedly tries to Take Over the World as well, and with all of his knowledge and powers he could potentially pull it off, but the Fantastic Four always manage to stoop him.,

In this game, he strikes a Big Bad Duumvirate with Albert Wesker to Take Over the World. 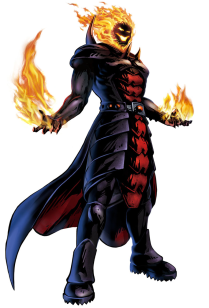 A higher-dimensional energy being, and absolute god-tyrant of his own magical universe, the "Dark Dimension". He wants to conquer all life and afterlife, exterminate any opposing conceptual forces, and rewrite the laws of nature to turn it all into a never-ending torture-camp set up to celebrate the glory of himself.

Due to actually possessing sufficient power and knowledge to potentially pull it off, Dormammu is considered to be "something worse than a demon", and is the archenemy of the hero Doctor Strange, who constantly somehow manages to thwart the entity's chilling mad ambitions. 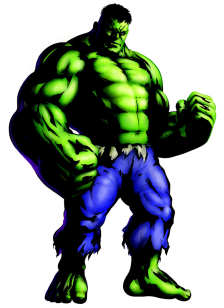 YOU MAKE HULK ANGRY! YOU NO LIKE HULK ANGRY!!!
Debut: The Incredible Hulk #1 (May 1962)
Voiced by: Fred Tatasciore

A genius scientist, Bruce Banner accidentally absorbed huge amounts of gamma radiation during a bomb test. As a result, when his anger or negative emotions reach a boiling point, he transforms into the green-skinned Hulk, complete with incredible power that sets the standard for strength. 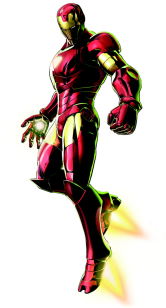 Captured by a terrorist group in a war-torn region, Tony Stark created a battle suit to help him escape. Afterwards, he improved the battle suit to become Iron Man, and has dedicated himself to protecting the peace since. 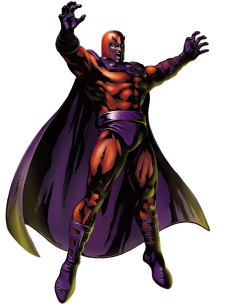 With almost complete control of magnetism, Erik Magnus Lehnsherr, birth name Max Eisenhardt, is one of the most powerful mutants alive. A survivor of the Auschwitz concentration camp during World War II, he developed the idea that genetically superior mutants should be the ones to rule over mankind. Fighting for the sake of mutantkind, he is a calculating character who stops at nothing to achieve his goals. 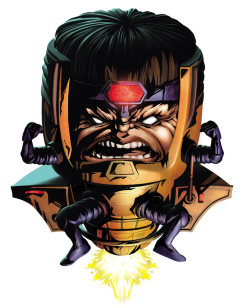 If you think I've evolved beyond the joys of murder, you'd be wrong!
Debut: Tales of Suspense #94 (October 1967)
Voiced by: Wally Wingert

Formerly just a regular human, George Tarleton was forced to become a living human experiment and was subsequently turned into M.O.D.O.K. (Mental Organism Designed Only for Killingnote The "M" sometimes stands for "Mobile"). Calling himself the Scientist Supreme and using his vast intellect and psionic powers, he annihilated all those who were involved in his experiment.

M.O.D.O.K. has everything you could want in a keepaway-focused character: a barrier wall, lasers, flight in place of a jump, attacks that knock opponents away from him, floating bombs, and special cube traps that let him use enhanced versions of each. 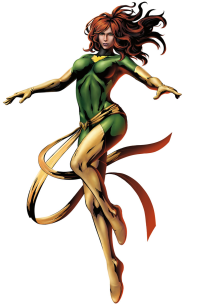 You're about to deal with forces you can't possibly comprehend.
Debut: The X-Men #1 (September 1963)
Voiced by: Jennifer Hale

Telepath Jean Grey became the vessel for the powerful Phoenix Force, which grants Jean near god-like powers when it becomes fully active. When she can no longer control her powers, a split personality, the Dark Phoenix, awakens. The Dark Phoenix lives only for destruction, and its thirst will never be quenched.

While Phoenix's health is about as strong as a wet paper bag, she has more than enough power to stay alive, with strong damage and traps. And if she does get knocked out, having a full Hyper Meter gauge lets her revive as Dark Phoenix, with improved moves. 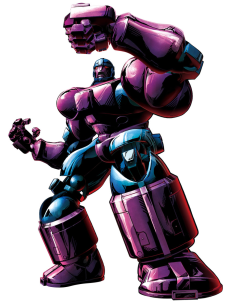 A robot mutant hunter developed by Bolivar Trask, a scientist who felt that mutants were becoming a threat to mankind. Without developing their own artificial intelligence, Sentinels dutifully obey their orders, no matter who gives them. 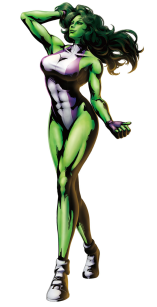 Bruce Banner's (Hulk) cousin. After being gravely injured, Jennifer Walters received a blood transfusion from Banner which allowed her to transform into She-Hulk. Her transformation extends as far as her personality, going from meek and mousy to strong-willed and confident. 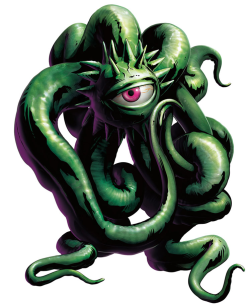 God of another dimension. As he will assume the form of whatever it is that people fear, he has no true form. Having taken a liking to Earth, he has tried to rule over the planet many times since the prehistoric age, but has usually been thwarted by a shaman or magic user, such as Doctor Strange. 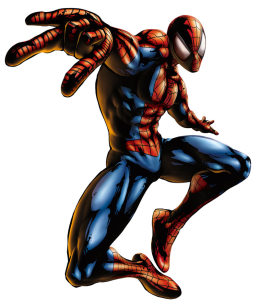 While attending a public science exhibit, young Peter Parker was bitten by a radioactive spider; this granted him special abilities, and he became the hero Spider-Man. When his beloved uncle was killed by a criminal Peter could have apprehended but chose not to, he swore to live by the creed of "With great power there must also come great responsibility." 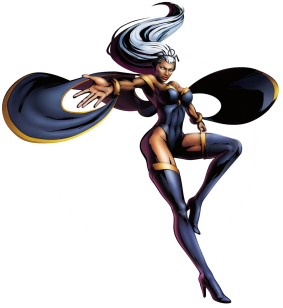 Though she survived the ordeal, Ororo Munroe's parents died when a plane crashed into their home. Being buried under rubble proved a traumatic experience that would leave her with severe claustrophobia. Orphaned, she became a street thief in order to get by. She was later recruited by Charles Xavier, and decided to put her powers to use for good as a member of the X-Men. 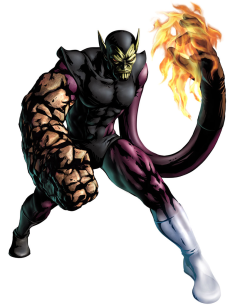 There's far too much trash in the universe.
Debut: Fantastic Four #18 (September 1963)
Voiced by: Charlie Adler

Kl'rt is a genetically-engineered super soldier created by the Skrulls to defeat the Fantastic Four, who stopped their invasion of Earth. His pride and tendency to look down on others is not unique to him, but a characteristic of the Skrull race in general. 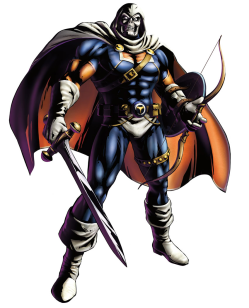 Tony Masters learned many moves by watching videos of heroes in action, and used his photographic reflexes to copy them and make them his own. Considering himself a businessman, Taskmaster opened a mercenary school for training criminals in the fighting arts. 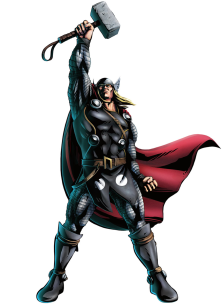 Thor is the son of Odin, ruler of Asgard, the home of the gods. Known as the strongest warrior in Asgard, his prideful ways were reformed after spending time living as a human. Currently, he is a member of the Earth's mightiest heroes, the Avengers. 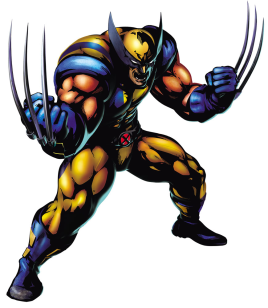 Beneath James "Logan" Howlett's gruff and crude exterior lies a noble spirit who genuinely treasures his comrades. However, in the face of his enemies, he is merciless, often employing extreme measures in his methods. 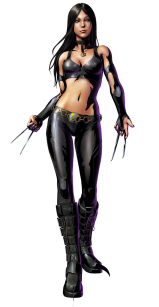 Cloned from a damaged Wolverine gene sample, X-23 (baptized Laura Kinney by the scientist who looked after her) was created for one reason: to be the perfect killing machine. For years, she proved herself a notable assassin, though a series of tragedies eventually led her to Wolverine and the X-Men, with whom she now seeks to turn her life around. 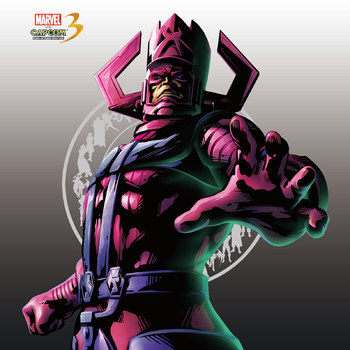 You are not unlike an ant fighting the Sun.
Debut: Fantastic Four #48 (March 1966)
Voiced by: Jonathan Adams

The sole survivor of the universe before the Big Bang, Galan was recreated into a "galactic ravager" by the sentience of the previous universe. In order for the giant-sized goliath to survive, Galactus feeds off the energy of living planets, which are located by his herald the Silver Surfer.