For the Marvel characters from vanilla MvC3, go here.

For the Capcom characters from vanilla MvC3, go here. 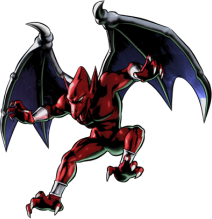 Firebrand is a type of gargoyle known as a Red Arremer. He will stand up to any threat posed to his home, the Demon Village, without any fear. Firebrand is considered to be an elite warrior among the Red Arremers, gaining him hero status among his peers.

In-game he can be best described as "Wolverine with flight". His style focuses on overwhelming speed, cross-ups, and all manner of tomfoolery to annoy his opponents. 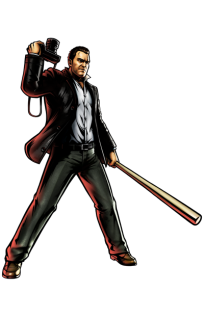 Though he's armed only with his strength, if there's a scoop to be had, he's got the courage to take anyone on. His willingness to dive head-first into any dangerous situation has saved his life as many times as it has put him in mortal peril.

While he doesn't have a specific weapon, he can utilize objects in his surroundings, such as golf clubs, benches, bicycles — basically, whatever he can get his hands on. He uses a "level up" system, enhanced by drinking beer and taking photos, that makes him more powerful and change the weapons he uses.

He's the only character in the game who has 2 intro animations: one where he kicks a zombie off him, and another (character-specific) where he takes some pictures of his opponent (this indicates that Frank has some special quotes for the said opponent). 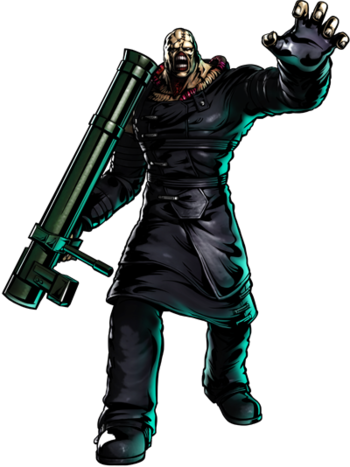 A Tyrant-type B.O.W.note Bio-Organic Weapon (officially T-02) created by the evil Umbrella Corporation, tasked with eliminating the members of the RCPD's S.T.A.R.S. division and anyone connected to them in order to cover up the company's involvement in the Raccoon City Incident. Possesing a fair amount of intelligence and sadism due to the Nemesis parasite controlling it, it is able to effectively carry around a rocket launcher. Whenever it runs into a problem, the parasite causes it to mutate in increasingly horrific ways to adapt and continue pursuing its target.

Nemesis is all about overwhelming the opponent with brute force, utilizing super armor, large hitboxes, and command grabs to keep up pressure. 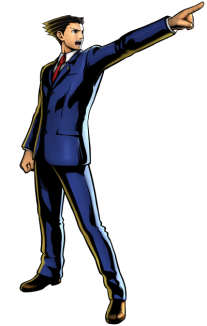 Phoenix Wright is a defense attorney who specializes in criminal law at the Wright & Co. Law Offices. Although he has encountered several extremely difficult and mysterious cases, he has overcome overwhelming odds and turned the cases around for every one of his clients.

Nick's fighting style mirrors his home game: in Investigation Mode, you gather "good" evidence while throwing away "bad" evidence, and in Trial Mode (aka Courtroom Mode), you throw documents and each "good" evidence turns into a decent projectile. If you have three pieces of good evidence and connect with an "Objection!", Nick enters "Turnabout Mode", where his moves are powered up and he can use his Level 3 Hyper Combo, accusing his opponent of being the real culprit. 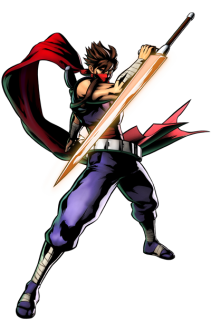 He is a member of the Striders, a secret organization specializing in kidnapping, assassination, demolition, etc., that has worked behind the scenes throughout history. Having obtained Special A-Class status at a young age, he is the organization's best assassin.

Hiryu's style has not changed much since his last outing. He is a speed-oriented, balanced fighter who specializes in mixing his opponent up and gaining meter to use his Ouroboros, which allows him to pelt the enemy with fireballs as he attacks. 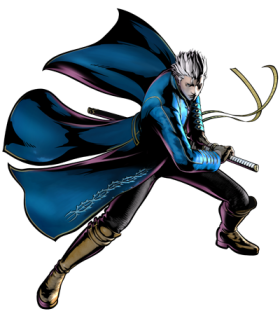 No one will stand in my way.
Voiced by: Dan Southworth (English), Hiroaki Hirata (Japanese)
Home Series: Devil May Cry
Debut: Devil May Cry 3: Dante's Awakening (2005)

Son of the Legendary Dark Knight Sparda and Dante's twin brother. Vergil blames himself for not having been able to protect his mother at a young age and believes that power is everything. Unlike Dante, he has embraced his demonic heritage and is willing to do whatever it takes to gain absolute power.

Gameplay-wise, Vergil resembles Dante, with whom he shares many moves, and Wesker, which whom he shares an aggressive, teleport-based style. Likewise, Vergil makes his approach with long-reaching sword attacks and teleport mixups, as well as Anti-Air kicks to cover for poor air game. He can provide ranged cover for himself and dramatically increase his damage output using the Summoned Swords, and he can increase his reach, damage and air mobility using Devil Trigger. But both of these techniques cost Hyper Meter, which is only built as damage is dealt or taken. As a result, Vergil is best used as an Assist Character for the length of a fight, while his allies build Meter through their victories and deaths, only to return as the Anchor, come their deaths, and wreak havoc with his powerful Hyper moves. True to character, he always needs more power. 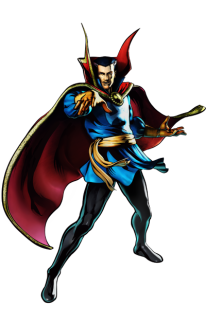 One does not require the Eye of Agamotto to see this outcome.
Voiced by: Rick Pasqualone
Debut: Strange Tales #110 (July 1963)

Once an ordinary surgeon, Dr. Stephen Strange studied under the Ancient One of Tibet and became the Earth's greatest sorcerer and hero. Having gained superior insight and knowledge through his studies, as well as obtaining valuable knowledge and consultation from other heroes, Strange acts as a consultant for all things related to the paranormal.

Strange is a master of filling the screen with projectiles, limiting the opponent's mobility with all manner of traps. He is also good up-close, having a normal move that instantly stuns the opponent and makes them crumple to the floor. His defense is weak, however. 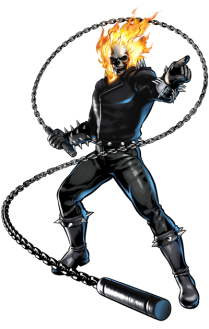 The day of judgement is upon you, scum.
Voiced by: Richard Grieco
Debut: Marvel Spotlight #5 (August 1972)

Bonded to the demon Zarathos through Mephisto's manipulations, motorbike stuntman Johnny Blaze acquired the power to become the Ghost Rider, the Spirit of Vengeance, who can project and control Hellfire. He manipulates mystical chains that can transform into other weapons.

Ghost Rider can use his chains to attack his opponents from roughly the distance of the entire screen. 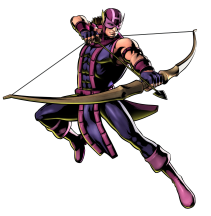 Trained to be a master archer by a traveling circus at an early age, Clint Barton joined the Avengers in order to protect the world from evil. While a bit overconfident and rash to act, on the battlefield he is often the catalyst that raises everyone's spirits.

His quote above holds water, as Hawkeye can effectively work on any team in the game. He is a good all-around character who is easy to use, but due to his simplicity, one must have an excellent grasp of fundamentals, similarly to Ryu. 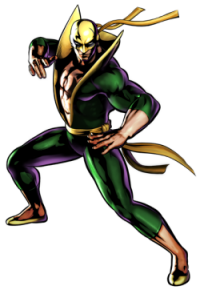 Having studied martial arts in the mystic city of K'un L'un for 10 years, Daniel Rand achieved the status of the city's strongest student. After completing his final trial—defeating the dragon known as Shou-Lao the Undying—and plunging his hands into the dragon's molten heart, he gained the power of Chi and the title of Iron Fist. He is good friends with fellow martial artist hero Luke Cage.

True to the comics, Iron Fist uses a very up-close fighting style involving intricate Rekka combos* combos involving special moves chained into one another. With enough power to kill most characters in a single unassisted combo, enough speed to cross the screen and strike in a fraction of a second, and the ability to tank projectiles and melee alike, Iron Fist has an truly unrelenting offence. But alas, as a hand-to-hand fighter in a game full of armed, ranged, and flying opponents that can avoid and outmaneuver him, he suffers from Crippling Overspecialization. 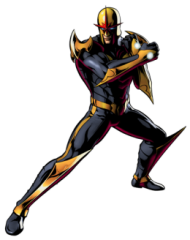 Chosen by the dying alien Rhomann Dey to receive his Nova Corps powers, Richard Rider began his new life as a super hero. His battles take him all throughout the universe, fighting evil wherever he is needed. In addition to superhuman strength and durability, he can fly through space at supersonic speeds. He can also absorb and reflect energy attacks.

Nova is a basic character who is akin to a fusion of Magneto and Hulk. He has excellent speed and power, even coming with a flight mode, but average health. 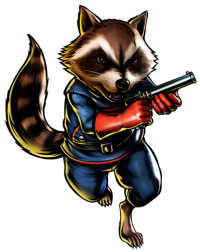 My version of a coonskin cap is basically me chewing on your skull.
Voiced by: Greg Ellis
Debut: Marvel Preview #7 (Summer 1976)

Rocket Raccoon is a raccoon from the planet Halfworld that has received several enhancements, upping his intelligence and battle awareness. He used to protect the colony as a ranger before getting involved in Phalanx invasion of the Kree Empire. He later became part of the 616 version of the Guardians of the Galaxy. He possesses the same heightened senses and speed as a raccoon on our world, but can also handle various weapons freely and possesses high intelligence that helps on the battlefield.

Because of his small size, he is quick and can avoid many attacks while utilizing a variety of traps to punish and confuse the opponent. Rocket Raccoon's health and defenses, however, are quite poor.