Heroes that primarily work alone. Listed by their Introductory Arc. 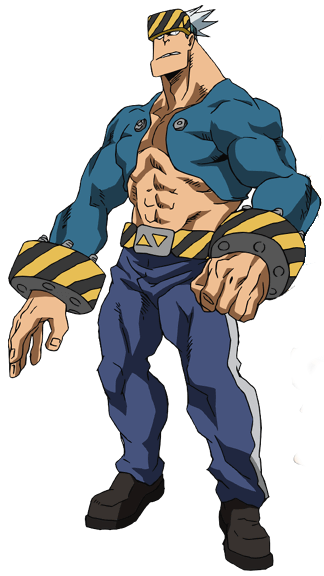 A Frankenstein-like hero whose Quirk seems to involve Super Strength powered by electricity. He's fairly abrasive and in the business mostly because it pays the bills. Jiro trained under him during her internship.

A pro hero who works as a firefighter. His Quirk, "Hydrokinesis", allows him to create and use water via the spigots on his hands.

A pro hero that flies around with a jet pack. He's greatly admired by Mei Hatsume.

Playable in: My Hero One's Justice 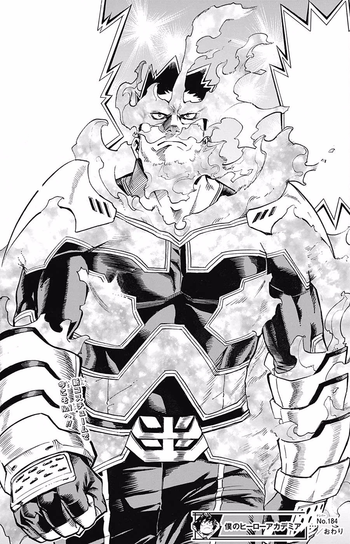 "Just Watch Me."
"I have no intention of asking for forgiveness after all that's happened. It may well be too late, but... all I can do is atone. That is the only path forward."

Shoto Todoroki's father, who possesses a fire-based Quirk called "Hellflame". He appears in person for the first time in Chapter 28, watching his son in the U.A. Sports Festival. At the start of the series, he is the 2nd-highest ranked hero and is obsessed with taking over All Might's number one spot, which he plans to do through Shoto.

He officially becomes the top-ranked hero after All Might's retirement, much to his displeasure. 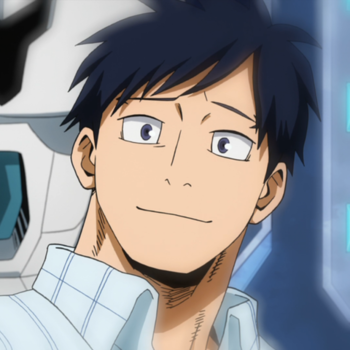 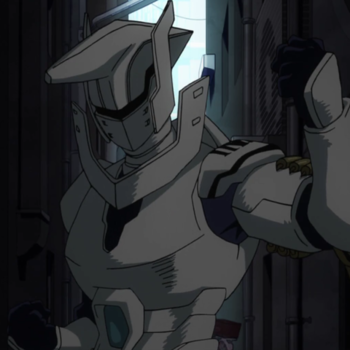 Tenya Iida's elder brother and a popular hero whom Tenya aspires to be like one day. Tensei heads an agency in Tokyo where he oversees 65 sidekicks and coordinates them based on their group strengths and support capabilities. According to his brother, Tensei is a nice man who follows the rules and values people.

He possesses a variant of the family's Engine Quirk, a pair of exhaust pipes on his arms that he uses to propel himself forward and sometimes even upward; basically, the inversion of his younger brother's Quirk.

Playable in: My Hero One's Justice

"You know that Midoriya kid... He's become more and more like you everyday!! In the worst way possible!!" 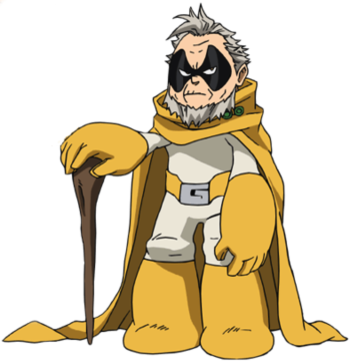 Click here to see him when he was younger 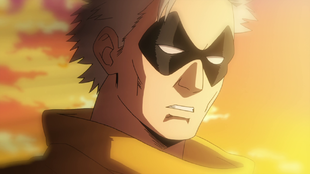 An elderly, retired hero who offers Midoriya an internship. He was All Might's homeroom teacher and a good friend of Nana Shimura, making him one of the few who knows the full truth about One For All. His Quirk, "Jet", allows him to move at high speeds by taking in the air around him and releasing it through his feet for propulsion effect. Due to his age though, he can't use it for a long time.

Fiber Hero
"Heroes and villains are two sides of the same coin... I can see it in that glare of yours. So what is it that really makes someone a Hero?"

The current 3rd-highest ranked hero who was previously ranked 4th. He's the one that picks Bakugo for internship. His Quirk is "Fiber Master", which grants him the ability to manipulate the fibers that make up clothing.

The hero that Iida chose for internship. A "normal hero". Manual named himself as such because he wants to be like a "manual" for other heroes to live by. His Quirk makes him capable of controlling the flow of water.

A hero whom Uraraka interns under. His Quirk, "Gatling", gives him gun-like organs that fire projectiles. In addition to this, he is a competent martial artist and is noted for his close-quarters combat. 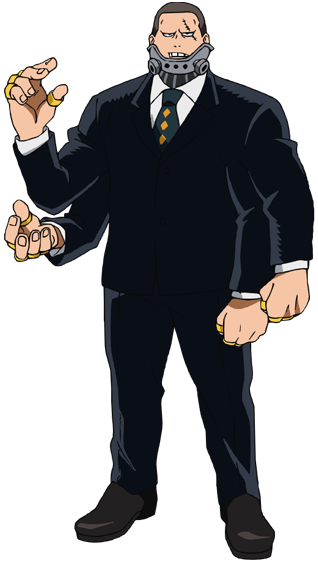 A hero who works as a civil servant called the Chivalrous Hero. Both Kirishima and Tetsutetsu wind up assigned to him. His Quirk is "Quad Arms".

A snake heroine Yaoyorozu and Kendo from Class 1-B are assigned to. Works as a model when not doing hero duties. Her Quirk is "Snake Hair". 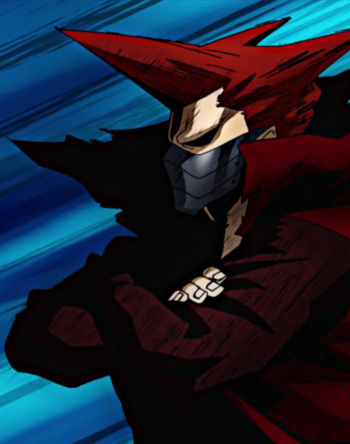 Chivalrous Hero
"It's about living without regret. That's what chivalry is to me!"

A pro hero whom Kirishima idolizes greatly. In fact, Crimson Riot has was who inspired him to become a pro hero in the first place. He's one of the old school names of heroism and was part of a bygone era. 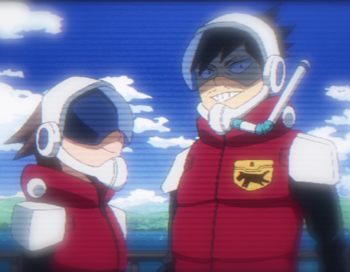 Water Hose were pro heroes and Kota Izumi's parents. They were brutally attacked and killed by a villain, but they made him regret it first. After their deaths, their relative Mandalay adopted their son. Both of them had water-based Quirks. 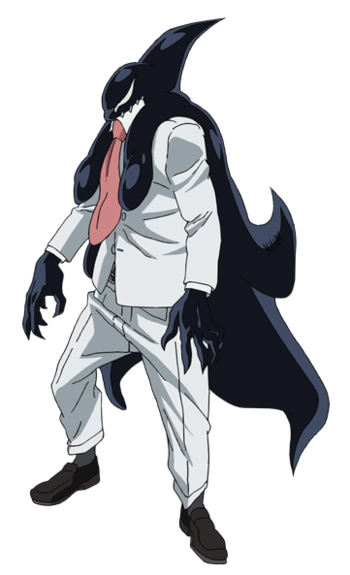 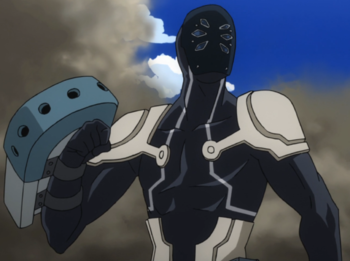 A group who works under Gang Orca as his sidekicks. They also worked as makeshift villains during the Provisional Hero License Exam. 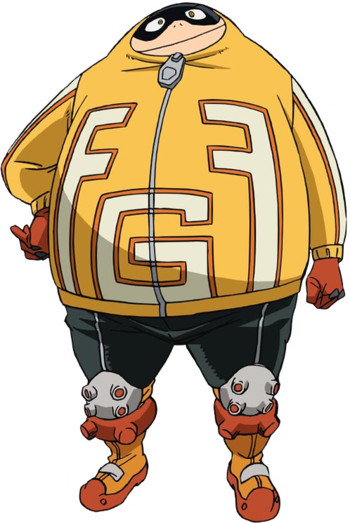 A hero with an appetite as big as his belly, he employs Eijiro Kirishima and Tamaki Amajiki. His Quirk, "Fat Absorption", grants him a highly obese, dense body that can adhere to any objects that enter in contact with it, causing them to sink into his body afterward, it also works to store energy of hits received, but at the cost of his defensive fat. 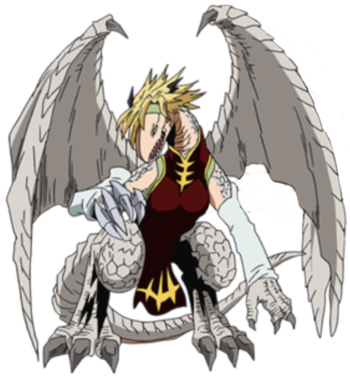 "You're as good as Nejire said. I can see why she recommended you two."

The former 9th and current 10th-highest ranked heroine, a dragon-themed heroine whose Quirk is the ability to transform into a massive dragon. She employs Ochako Uraraka, Tsuyu Asui, and Nejire Hadou as her interns.

Lock Hero
"We've come this far already, haven't we?! Just one last push! Think of what everyone went through to buy you time... don't waste it!"

An ill-tempered and rough-edged hero who, despite his more Jerkass traits, has a soft center. He respects actions, not words, and praises those he deems worthy while calling out those who don't deliver.

His Quirk is "Lockdown". It allows him to secure objects into a point of space, freezing them. 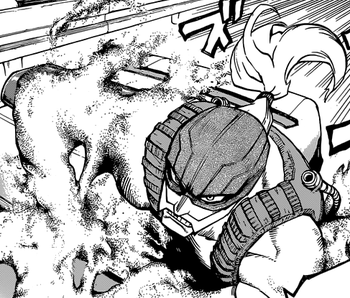 A pro hero with a noble way of speaking and thinking. His Quirk allows him to transform his upper body into sand. 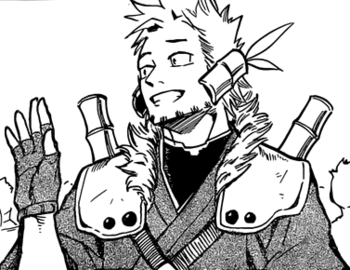 A pro hero that was also a classmate of Gentle when they were in high school. 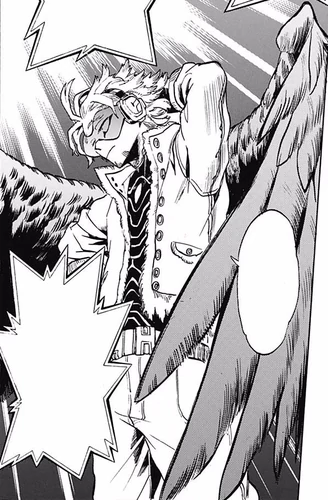 Wing Hero
"I just wanna enjoy myself. Seriously. Do some leisurely patrolling, put in a few appearances, say "Aw shucks, no trouble today," and get a good night's sleep! That's my ideal life! I wanna make this world one where heroes have time to kill."

The Winged Hero and currently the 2nd-highest ranked hero. A young man with large wings that claims to "take it easy". He's very outspoken and likes throwing people for a loop. Tokoyami is interning under him.

His Quirk, "Fierce Wings", allows him to control the feathers of his wings with his mind. These can be used for attacking enemies or assisting or saving people.

Rabbit Hero
"Joining a team is for the weaklings!"

The rabbit hero, a strong woman who works alone. She is currently the 5th-highest ranked hero and the highest ranked female hero. Her Quirk is "Rabbit", which grants her a rabbit-like anatomy and abilities. 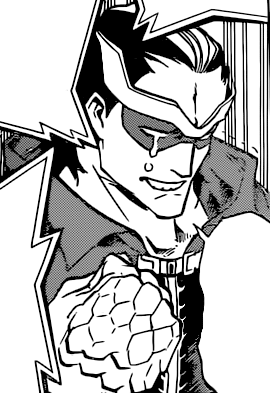 The current 6th-highest ranked hero who greatly admires All Might. 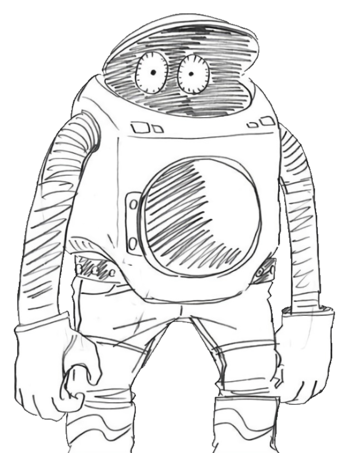 A hero who resembles a washing machine who is currently the 8th-highest ranked hero. 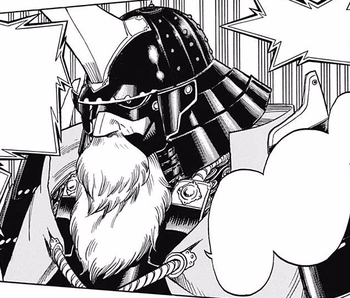 Equipped Hero
"The top three aside, it's just luck and timing... that determines the rest of the rankings."

An older samurai-themed hero who is currently the 9th-highest ranked hero.

A sea rescue hero who captains the ship Oki Mariner. Tsuyu interns under him. He took on Sirius as his sidekick and has a crew of tough men, including one named Mick. His Quirk, "Spotted Seal", gives him the abilities of the mammal, as well as the power to emit a very high-pitched frequency that doubles as sonar, and in times of distress, can be used as Morse code.

The sidekick of Selkie and only female member of his crew. Her Quirk, "Good Ear", lets her hear sound frequencies beyond the hearing spectrum of a normal human. Paired with Selkie, she can pick up his secret transmissions through sonar. 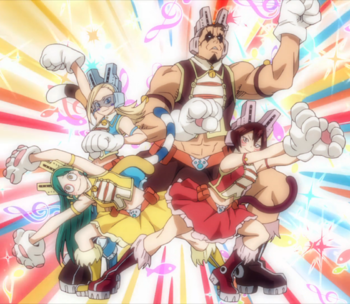 Ragdoll: That's right! The four of us are one!
Mandalay: Lock on with these sparkling gazes!
Ragdoll: We've come to lend a paw and help!.
Tiger: Coming out of nowhere...
Pixie-Bob: Stingingly cute and catlike!.
All together: Wild Wild Pussycats!

A four-person hero team that specializes in mountain and forest rescues. Their members include Mandalay, Pixie-Bob, Ragdoll, and Tiger.
Shino Sosaki — Mandalay

The leader of the Wild Wild Pussycats. Her Quirk is "Telepath", which allows her to talk to multiple people at once through the mental transmission. She's the legal guardian of her nephew, Kota Izumi.

"I'm looking forward to all of you three years from now! I'm claiming you, ptooey!"

A member of the Wild Wild Pussycats. Her Quirk, "Earth Flow", lets her control dirt and rock. 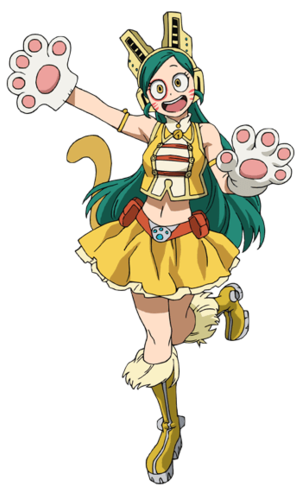 "AHAHAHAHA, Look at 'em grumble, the whole lot of 'em!"

A member of the Wild Wild Pussycats. Her Quirk, "Search", allowed her to observe and monitor up to 100 people at a time, including their location and weak points.

"Plus Ultra, right? Then show me that Ultra!"

The sole male member of the Wild Wild Pussycats. His Quirk, "Pliabody", allows him to stretch and flatten his body.

"You cannot possibly prevail over my 'Foresight'".

All Might's former sidekick. They seem to have parted ways in an awkward manner, but he still looks up to his mentor. He values laughter and humor over everything, even though he is quite strict and serious otherwise. His Quirk, "Foresight", grants him vision of a person's entire future, though it gets fuzzier the further he looks ahead.

"We have this kind of process. We wanted to request everyone's cooperation on HN."

One of Sir Nighteye's sidekicks. Her Quirk, "Bubble", allows her to create bubbles with an assortment of smells. They pop with explosive force.

"I am a sidekick, Centipeder."

One of Sir Nighteye's sidekicks. His Quirk, "Centipede", gives him body features like the titular chilopod.

A group of four of Endeavor's sidekicks

A famous sidekick of Endeavor's. 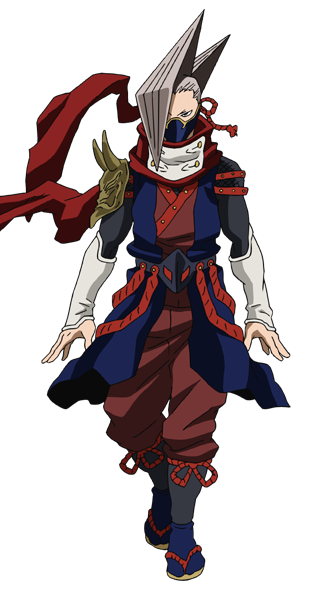 Ninja Hero
"One must never neglect defense. Especially when attacking..."

The current 4th-highest ranked hero who was previously ranked 5th, a man dressed in ninja garb. His Quirk is "Foldabody", granting him paper-like physiology.

He recently started a hero team with Kamui Woods and Mount Lady.

"Stand down, you big lump of evil!"

A pro hero with wooden powers. A newcomer to the hero circuit, but a nice example of what a traditional hero should be. He's currently the 7th-highest ranked hero.

He recently formed a hero team with Edge Shot and Mount Lady.

A pro heroine with gigantification abilities. However, she's a shameless media glutton and not above using her looks to gain favors. Mineta trains under her during his internship but had a terrifying experience under her that he refuses to reveal. She recently partnered up with Edge Shot and Kamui Woods to form a hero team. As of Chapter 184, she is the 23rd highest ranked hero.