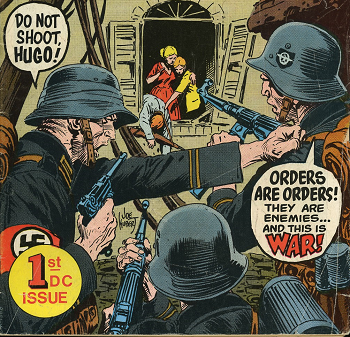 Just Following Orders is a justification for morally questionable actions that a character may invoke when questioned about the rightness or necessity of such actions. This justification holds that the (bulk of the) responsibility for such actions falls upon those who make such decisions and give such orders within a (military) hierarchy; by extension, those who obey and act upon such orders cannot be held (entirely) accountable for their actions. Often invoked with the exact phrase "I was Just Following Orders." Also known as the "Nuremberg Defense" because a notable flaw of the immediate post-war German penal code was that the worst category of murder and its attendant sentences ("first-degree murder") could only be "for base motives" (hatred, bloodlust, greed, etc.), which did not include "dispassionate" participation in mass murder.note This was subject to an Obvious Rule Patch later on. Modern laws tend to distinguish between "degrees" of murder according to prior intent/planning instead, with one's emotional or rational reasons for the murder(s) taking a back-seat. Indeed, Common Law does not distinguish between types of murder at all (though the motivations do of course affect the sentencing). Perpetrator testimony and the Milgram Experiment

note  More specifically, the series of experiments in which the test subject operated alongside two other "test subjects" (actors) and in the absence of supervision from the 'scientist' running the experiment. Interestingly, the very best results in compliance (near-total) were reached in the series where the test subjects were asked to perform tasks that only "enabled" the shocks to be administered, such as setting the dial on the shock machine to a level indicated by the "scientist" indicate that even when the desire to conform with the group is a major or primary reason for someone carrying out an immoral group action, they almost always frame their compliance in terms of obedience to authority. They believed that obedience to authority at least partly justified or excused immoral behavior, and that desire to conform did not.

Accordingly, Just Following Orders is the Stock Phrase motto/mantra/defense of the Punch-Clock Villain, as well as most bureaucrats (obstructive or otherwise), Mooks, and just about anyone during failures of nerve, job security, heroic fortitude...

It seems justifiable if you put yourself in their shoes. One is legally trapped between the prospect of immediate punishment from national law or possibly delayed punishment from an international court attempting to judge from a higher moral law. If your life and/or your family's life was threatened if you disobeyed orders you knew to be morally reprehensible, what would you do? This was the choice presented to the 'Hiwis' (conscripted from Soviet POW and civilians), Jewish Police (recruited by the Jewish Councils from the ghetto populations), and 'Sonderkommando' (recruited from Extermination Camp inmates). This is why the surviving Hiwis, Jewish Police, and Sonderkommando were never tried for War Crimes or Crimes Against Humanity, but some of the senior commanders of the German troops who supervised them (volunteers legally and practically entitled to opt out, as many did) were.

The sympathy of the victims of such atrocities to the troubles of their persecutors is, of course, not a given.

This trope is by now usually not played straight but instead cowardly, ironically, sarcastically, or self-hatingly. Still, it's one of the tropes that cycles between Dead Horse Trope and Undead Horse Trope, because the dilemma it rests on is close to unresolvable. Quoting the trope by name, though, is likely to be met with skepticism and ridicule. If the "crime" being excused is a relatively minor one, though, then an accuser invoking a parallel with Nuremberg may be seen as invoking Godwin's Law.

Often the de facto justification of those who believe in My Master, Right or Wrong or My Country, Right or Wrong, or "I Did What I Had to Do". If taken to extremes, it can result in Blind Obedience. A Lawful Neutral may well end up saying this at some point depending on who he serves.

Contrast Just Giving Orders, Won't Do Your Dirty Work, and Disobeyed Orders, Not Punished. Not to be mistaken for Think Nothing of It or All a Part of the Job, catchphrases associated with the Humble Hero. Also not for when it's said by someone who's Bothering by the Book. If the villain literally has no clue that the order they follow would cause harm, it may overlap with Obliviously Evil.