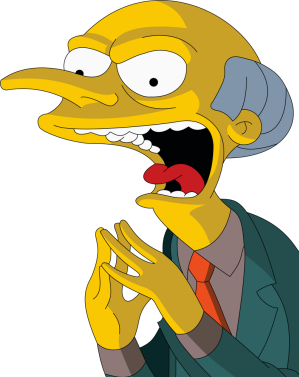 You're hearing it in your head right now, aren't you?
Hades: What's with the laughing? What is that? Who does that help, huh?
Jafar: It punctuates my evil. It's a flourish. (continues laughing)
Hades: You are such a freak.
— Hercules: The Animated Series, "Hercules and the Arabian Night" (Hades admits it's cleansing later)
Advertisement:

Your Applied Phlebotinum doomsday device has been activated. The MacGuffin is within your grasp. The good guys are locked away in the Death Trap. Your circuitous Evil Plan is three-quarters complete! You know what, screw being the Evil Overlord of the world — you're already a god! There is only one thing left for you to do — but first things first:

The Evil Laugh. Don't knock it 'til you tried it, folks.

This became an Undead Horse Trope long ago and usually will produce nothing but pure Narm. There are only a few characters who are able to get away with this in modern media:

In any case, it has since devolved to the occasional evil chuckle (which may or may not be a bit scarier) or so every once in a while, except in certain cases, and the trope of laughing while your victim is helpless is definitely dead, as modern villains usually laugh while they work (to much better effect). A common subversion is to have a villain have an Un Evil Laugh, with snorting, chuckling, and squeaking, especially if they are a villain in a comedy series. Similarly, a common parody is to have the laughing villain start coughing or sputtering if they laugh long enough or hard enough.

20. Despite its proven stress-relieving effect, I will not indulge in maniacal laughter. When so occupied, it's too easy to miss unexpected developments that a more attentive individual could adjust to accordingly.

Truth in Television: Passionate laughter, like screaming, is a great relief for stress and adrenaline, with the added benefit of embarrassing and taunting self-conscious opponents. Just don't take it too far in public.

Compare Noblewoman's Laugh, Evil Is Hammy, Evil Gloating, Evil Has a Bad Sense of Humor, Drunk on the Dark Side, Giggling Villain, Laughing Mad, and Laugh with Me! When it looks like the villain is defeated, but then they pull this out, it's Ominous Adversarial Amusement. It's even more jarring (and awesome) when the villain in question is an emotionless character.