The male protagonist of the series. Tsukune is an all around average human until one day his father comes home with an application to a mysterious academy he found. Taking it as a sign from above, Tsukune's parents send him to Yokai Academy, which Tsukune learns is a school for monsters! Luckily Tsukune meets Moka Akashiya, his main love interest who coincidentally is a vampire! Along the way, he and Moka make new friends, mostly members of his unwanted harem, and try to survive in the dangerous school. Later in the series he develops vampiric powers thanks to blood injections from Moka. His new power is sealed by a Holy Lock, which keeps him from becoming a Ghoul. Even with this detriment though, Tsukune manages to take life one life-threatening attack from a monster at a time! 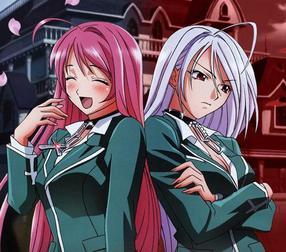 The first person Tsukune meets when he sets foot in Yokai Academy. Exceptionally sweet and kind, Moka is a vampire, and takes a liking to Tsukune after ingesting his blood, becoming addicted in doing so. When the rosario around her neck is removed, the seal keeping her true nature is released. Cold and arrogant, "Inner" Moka is a completely different entity from the kind and loving "Outer" Moka, going so far as to specifically remind Tsukune to "be kind to the other Moka". Tsukune is the only one able to remove the rosario around Moka's neck.

A busty succubus attending Yokai Academy. She was initially a rival to Moka, being jealous of her popularity surpassing her own, and attempted to seduce Tsukune and the male student body to find her "Mate of Fate", as her kind is near the brink of extinction. After she was badly beaten during a fight with Inner Moka, Tsukune persuades Inner Moka to spare her, and as a result, Kurumu not only became friends with the pair, but also becomes infatuated with Tsukune, and makes a decision that he will be her "Mate of Fate". 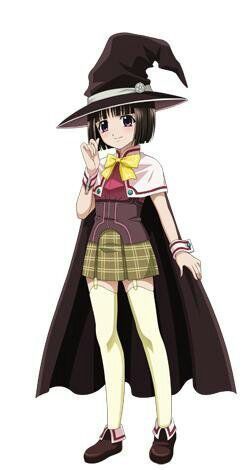 The smartest student at Yokai Academy, and the youngest at age 11. As a witch, she has problems with her classmates discriminating against her (according to Kurumu, witches are viewed as "Beings of the Borderline", those that are something between humans and the supernatural, as it is impossible to tell their difference by appearance alone). Despite ranking #1 on the examinations, she was a lonely prankster before meeting Tsukune and Moka. She initially hated Tsukune, claiming that she has fallen in love with Moka, and uses her magical powers to try to drive them apart. However, after both Tsukune and Moka save her from bullying classmates, she falls for him too, and her obsession with both has driven her to try to create a three-way relationship between them.

A yuki-onna who is in the same homeroom class as Tsukune and Moka, frequently seen with a lollipop in her mouth (yuki-onna are vulnerable to warm climates; doing so keeps their bodies cool). Mizore returns to school after a delayed absence and was first portrayed as a lonely, somewhat depressed, and misunderstood girl. She becomes infatuated with Tsukune, going so far as to create her own journal/scrapbook with all of his newspaper articles.

In the past, she confessed her love to a teacher until he began taking advantage of her, freezing him as a result. With the incident and rumors spreading about her, Mizore made it hard for herself to trust anyone, but took a liking to Tsukune, believing he was just as miserable as she was. She eventually regains her sense of trust after Tsukune intervenes when the same teacher returns to kill her. Unfortunately, this leads Mizore to stalk Tsukune on a daily basis.

A witch from the human world who was part of a plot to destroy mankind as a response to a large garbage dump polluting her mistress' sanctuary. Despite not being an official student, she receives permission to become a member of the Newspaper Club as its assistant advisor (though she prefers to take orders). 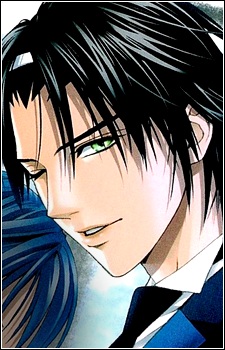 A werewolf and the president of the Newspaper Club. He is a second-year student at Yokai Academy and a shameless peeping tom who initially began as an antagonist to Tsukune, but becomes somewhat of a sempai to him and his friends.

The younger half-sister of Moka Akashiya. Like her sister, Kokoa is also a vampire, but her powers are not sealed and does not carry the same level of supernatural strength that Moka possesses. To compensate for it, she has a pet bat named Kou that can transform into a variety of weapons and wields it with enough strength to make herself formidable. Kokoa despises Moka for sealing away her inner personality, whom she adores and loves. Before Moka left to study at the academy and prior to her receiving the rosario, the sisters often clashed with one another, although Kokoa could never defeat Moka in a duel. 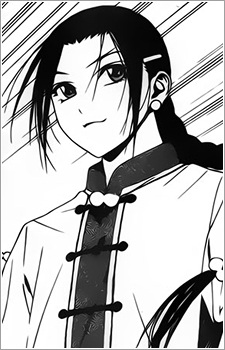 The eldest and only son of a Chinese mafia family, the Huang. After hearing that Tsukune defeated the 7th sub-division of Fairy Tale (it was actually Ginei and Haiji), Fang-Fang tries to recruit him to his family... by marrying him. Needless to say, he always fails, even when offering to Marry Them All. However, it's implied that he has developed feelings to Yukari. He doesn't join the Newspaper Club until the epilogue chapter reveals that he already has.