A team of government-sponsored superheroes who recruit Sydney. Tropes applying to the whole team:

"My hyperactivity gives me an initiative bonus!"

The lead character of the comic, Sydney is a hyperactive, tightly-wound geek who part-owns and runs a comic-book shop. She's also the newest member of Arc-SWAT, and is a bit of an oddity, as she's just a normal human bonded to seven mysterious orbs which give her superpowers.

"I miss the Air Force already."

The commanding officer of the ARCSWAT squad the comic follows. Powerful, beautiful, and a vehement feminist, she serves as something of a straight man to Halo and some of the squad's other, wackier personalities — much to Maxima's regret.

Part demon, part alien, cybernetic, psychic, magical, trained in martial arts, and mutant besides, this beguiling creature seems to exist to make off-color jokes and be a thorn in Maxima's side.

"You may be the most powerful super in the world, but if you want to crank the pranks, you're on!"

A teleporting duplicator, Harem's original body doesn't disappear when she teleports, allowing her to have up to five bodies coexisting at one time. Bisexual and something of a tease, she gets on several of the others' nerves.

"Superpowers are like vegans — they can't wait to tell you about them."

A sniper and helicopter pilot, and the only active-duty member of ARCHON we meet who doesn't have superpowers or a close approximation thereto.

"Watch out, the big guns are here."

A super-strong, energy-absorbing powerhouse. Anvil is good friends with Maxima and is the only one of the three African-American members of the team we've been introduced to thus far.

Super strong and tough, can fly, is very photogenic, and has an ace up his sleeve. Apparently had a respectable army career before becoming a superhero.

"I can see your beautiful muscles flexing from a mile away!"

An incredibly accomplished martial artist — so much so that his skills skirt the line between training and actual superpowers. He's also a lecherous creep, though usually a lovable one.

A super-stretchy member of the Arc-SWAT team. Currently dating Heatwave.

"You can only drive a car off a plane into an ammo dump so many times before it gets boring."

An utterly invulnerable man (to the extent that he takes calming swims in active volcanoes and knocks missiles out of the air with his face). Personality-wise, Achilles is somewhat stuck in the '80s, though it's uncertain whether that's just what he's like or if it's a side-effect of his powers.

A super-strong member of Arc-SWAT, who can increase his body density and weight at will. 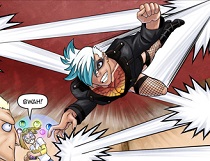 A superpowered martial artist who can empower herself using a variety of styles (Pangolin style, Cheetah style, Crusader style). She was originally one of the villains who attacked Archon at the diner, but was under compulsion by Vehemence and later joined Archon.
Jiggawatt

A lightning-oriented super; she can create lightning, control lightning, and turn into lightning, allowing her rapid travel. She seems to have a mildly goofy sense of humor combined with a readiness to do the job she's paid for. 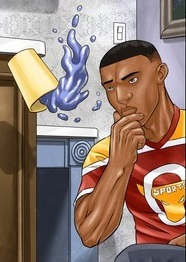 "Well, I can take a shower in ninety seconds, get dressed in under sixty, and make a bottle of shampoo last six months."

A new recruit for ARCHON, in the same "class" as Sydney.

A Bostonian Aztec-American member of the team, again in the same "class" as Sydney, with a gestalt ability that changes based on who she is touching.

A new recruit for ARCHON, in the same "class" as Sydney. Claims to be a colony of superpowered spiders with a Hive Mind, may just be a Troll.

A consultant with ARCHON, Zephan is a retired adventurer with years of experience studying the odder parts of the world.

Actually a novice magician, but evidently not at a level to take part in combat; she works on the support side at ARCHON. However, she has enough competence to cast a spell that keeps herself and two others from being noticed by a large group of supervillains in the middle of a fight scene.

An Arc-Light special agent with the investigation branch who has some "expertise with artifacts".
Specs
A super with the ability to see in a variety of spectrums.
Lucas Jorsten
A data analyst for ARC-Light who tracks incidents suspected to have been caused by supers or other unknown forces.

The classified handler Archon has watching Dabbler, just in case she was serving as the vanguard of an invasion force, or something similar. He's laconic and pragmatic, suiting his job as a spy; he evidently uses a high-tech invisibility/stealth suit, which may be his own design. The only member of ARC-dark so far seen (or possibly acknowledged).

In General
The branch of ARCHON that works on equipment and technology.
Digit
An inventor for ARC-Sparq, pulled from field duty after a few incidents involving untested inventions.
Iron Cloth

A fabrikinetic who works in ARC-Sparc designing uniforms and body armor, in addition to developing several fashion lines.
Fashion Ninjas
A pair of tailor ninjas who work with Iron Cloth.

In General
The branch of ARCHON dedicated to defense, containment, and clean-up.

The PR representative and legal counsel for ARCHON. Enjoys tweaking Maxima and manipulating the press. 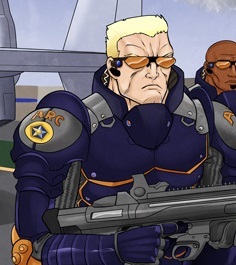 A surly-looking fellow with short blond hair and shades who is presumably an ex-military type who provides Archon with security and maybe weapons instruction. Goose is acknowledged by the writer to bear an unfortunate resemblance to a certain video game character. He hasn't demonstrated any actual superpowers, but he is clearly more than willing to assist the team in combat and is quite effective about it.

"Don't bother imagining us all in our underwear, because we're all dead sexy."

The officer in charge of ARCHON.

"It would be a shame if your bank accounts mysteriously disappeared."

The technical expert at ARCHON. A self-avowed nerd with a bit of a complex about dealing with beautiful women (which makes working with superheroines an... interesting prospect).

A financial adviser that helps the Archon supes manage their huge paychecks.

A super with the power to heal others. Not technically part of ARCHON, she drops by the base once a week or after any major fight, spending most of her time visiting trauma wards.