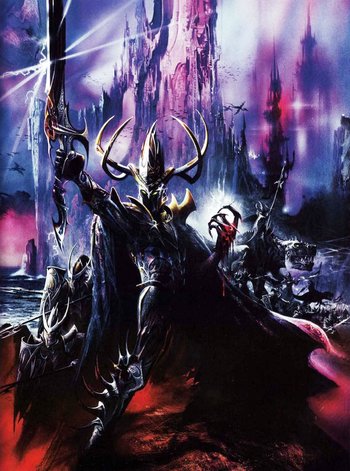 Drop the "Your Highness" stuff, we're all friends here. You may address me as "Dark Lord."
"I am power unlike any you have known: absolute, infinite, and unrelenting. You have no choice but to prepare for a long dark future as my subjects — and my slaves."
— Darkseid, Superman: The Animated Series, "Apokolips... Now! (Part 2)"
Advertisement:

He usually lurks in an intimidating fortress in a near-uninhabitable landscape, plotting to Take Over the World (if he doesn't already rule it or has already taken over parts of it), with hordes upon hordes of beastlike warriors (who may be none too bright) at his beck and call.

There are a few, more interesting exceptions: C. S. Lewis's White Witch was draped in white, symbolic of joylessness, decay, and endless winter, and his Lady of the Green Kirtle was green, symbolic of snakes and venom. Some works also portray these characters as beautiful and radiant, in a subversion of both this trope's usual appearance and of the cultural associations of angelic appearances.

Compare with The Caligula, an Ax-Crazy and highly unstable ruler which sometimes overlaps with the Evil Overlord. The difference is that while they are both villains, the Caligula enjoys royal background (which is possibly the only reason why anyone puts up with them) and is likely to be just a plain terrible and ineffective ruler, whereas the EO doesn't have to be either.

See also: Overlord Jr., Tin Tyrant (often overlaps) Diabolical Mastermind (the real-world equivalent), and Galactic Conqueror/Dimension Lord (this trope In Space!). Namesake for the Evil Overlord List. For the most common interpretation of these characters in Japanese media, see Maou the Demon King.

Not to be confused with the video game Overlord and its sequels, nor the novel series Overlord (although they both feature one of these guys as the protagonist).

open/close all folders
Anime and Manga
Comic Books
Comic Strips
Fan Works
Films — Animation
Films — Live-Action
Gamebooks
Live-Action TV
Music
Tabletop Games
Web Animation
Webcomics
Web Original
Western Animation
Statler: You know what I would do if I were an Evil Overlord?
Waldorf: Oh? What's that?
Statler: Quit. They always try to rule over everything. Would you want to rule this world?
Waldorf: Nah. It's more fun to make fun of it!
Both: Doh-ho-ho-ho-ho-hoh!
Feedback