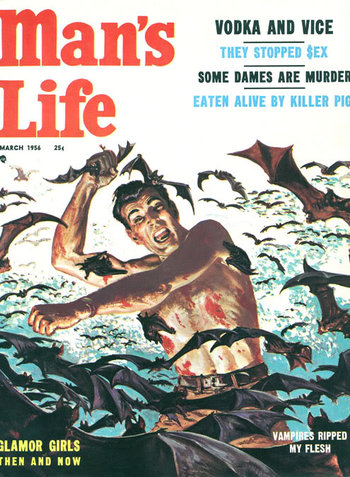 It's a man's life being eaten by bats.
Samwise: Lovely, big, golden chips with a nice piece of fried fish... Even you couldn't say 'no' to that.
Gollum: Oh yes we could. Spoiling nice fish.... Give it to us... raw... and wr-r-r-riggling.
— The Lord of the Rings: The Two Towers
Advertisement:

Being eaten alive. Probably one of our oldest Primal Fears, and quite universal, given that we have long shared this planet with some rather nasty predators. This isn't quite the threat it used to be for those of us who live in parts of the world where humans have made most dangerous land animals extinct or endangered (those in the sea, not so much), but stories of monsters of all kinds (dragons, aliens, demons, zombies, etc.) remind us that we can become prey again very easily. It's probably the most common fear we have as kids.

Sometimes the victim is Swallowed Whole, but other times, he or she is savagely ripped apart piece by piece (this is especially common if one is overtaken by multiple creatures out to eat you).

See also Fed to the Beast, where someone is deliberately consigned to this awful fate, and Too Spicy for Yog-Sothoth, for when the eater changes its mind. Almost never seen in common media is when the eaten is a vorarephile

, those rare individuals for whom being eaten alive is not a fear...but a fetish.

Super-trope of Devoured by the Horde, where a character is eaten alive by multiple parties. Compare and contrast Stewed Alive, which is usually Played for Laughs and involves Black Comedy Cannibalism. When done pragmatically, you have Eating the Enemy. Sometimes if you are eaten, you don't have to worry about being digested, because Getting Eaten Is Harmless.

If you were looking for the film Eaten Alive by Tobe Hooper, you'll want this page.