"This world of ours is a crude one. In a word, it is incomplete. It has been, and always will be, a struggle to survive in this world. We humans and Pokémon are likewise incomplete. Because we are all so lacking, we fight, we maim... It is ugly. I hate the incompleteness. That we are all incomplete, I hate it with my entire body and being. The world should be complete. The world must change. Then, who will change it? Me, Cyrus. And Team Galactic. Yes, all of you. Together we pored over myths and exposed their secrets. Together we captured legendary Pokémon. And now, Team Galactic has obtained the energy to change the world! The power of dreams is within our grasp! Understand it, fellow members! My long-held dreamworld is on the verge of becoming reality. All those headed to Mt. Coronet, and those who remain here... Though our missions may differ, our hearts beat as one. Let there be glory for Team Galactic!"
— Cyrus

The villainous team of Pokémon Diamond and Pearl, and the fourth one in the series. A strange group of criminals, Team Galactic is focused on harvesting energy, but aren't above stealing Pokémon and planting bombs. Why exactly they do this is something even the grunts don't fully understand, but the admins know the true scope of the organization's goals, as outlined by their emotionless leader, Cyrus: with the power of Dialga and Palkia, erase the entire world and create a brand new one, devoid of spirit. 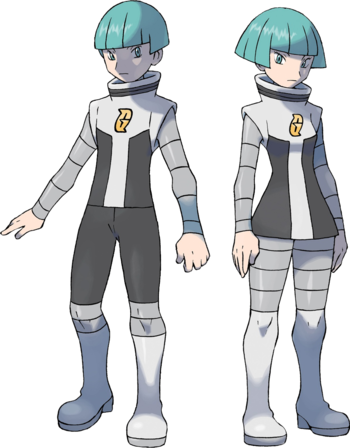 "One day, you will awaken to a world of my creation. A world without spirit."