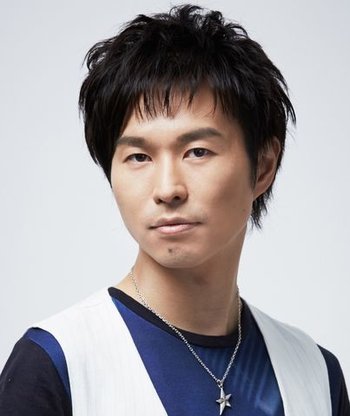 Tsubasa Yonaga is part of the new generation of Japanese voice actors. He was born January 15, 1984, and began to garner attention with his roles in Big Windup! and Kishin Taisen Gigantic Formula, for which he won a Best New Actor award in the Second Annual Seiyuu Awards.

He has a high tenor voice, making him perfect for playing boys and teens of both the sweet and energetic varieties. He has also performed a few songs for some of the shows he's starred in.

He may also be the first ever Japanese voice actor to unironically invert the usual Crossdressing Voices trope, as the voice of female Sanrio mascot Kirimi-chan, including her anthropomorphized Magical Girl version.

He since married fellow voice actress Yuka Nishigaki in 2015.