The main characters of Archer. 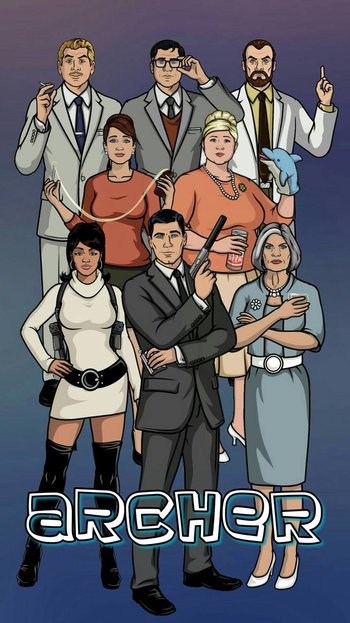 The "heroes" of the show. 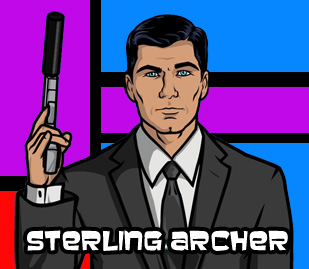 Despite being one of ISIS's top secret agents, Archer has consistently proven himself to be questionably competent, questionably sane, morally questionable and an ignorant jackass. He has still kept his job at ISIS (his mother is the boss), but this hasn't shielded him from the ire and scorn of his colleagues or mother. 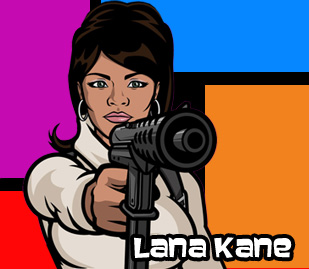 "When we first started going out, I may have injected a tracking device into your body."
Voiced By: Aisha Tyler
"So as far as Archer is concerned, I feel like I dodged the world's most dysfunctional bullet."

Another of ISIS' top agents. Like Archer, she's an excellent but flawed agent, her problems manifesting in her sarcastic and slightly bloodthirsty nature. She routinely squabbles with Archer, both of them bringing up their previous sexual history with each other. She also has large, mannish hands. 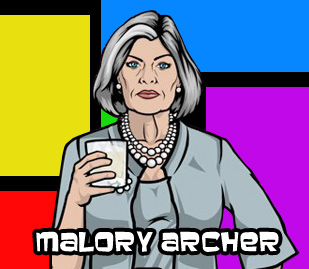 "If I cared what you did on a weekend I'd put a shotgun in my mouth and pull the trigger with my toes."
Voiced By: Jessica Walter

Head of ISIS and Archer's mother. Just about as snarky, selfish, sex-crazed, and jerkish as Sterling, if not more so. At times she'll abuse her power (such as using a bomb threat to steal a first-class cabin on a blimp from her hated neighbor), but mostly she'll try to make sure that ISIS missions go as smoothly as possible, sighing all the way as her idiot son screws everything up. 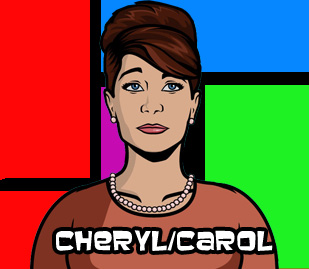 A secretary at ISIS. Cheryl has been known to repeatedly change her name, due to people not remembering her original one or purely on a whim. She ranges from sexually precocious to voracious and has a twisted fetish for being strangled and murdered. She's a member of the highly wealthy Tunt family. She commonly changes her name throughout the first season, but sticks with Cheryl afterwards, though if someone calls her by the wrong name, she won't object.. In Season 5, she was a country singer by the name of Cherlene. 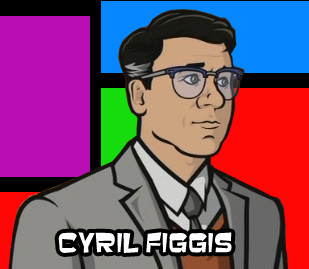 ISIS comptroller. A meek, cowardly, and slightly whiny man who dated Lana for several episodes at the start of the series. At times he's been a helpful influence in a few missions, but sticks to ISIS HQ and worries about Lana. Promoted to field agent as of Season 3's "El Contador". 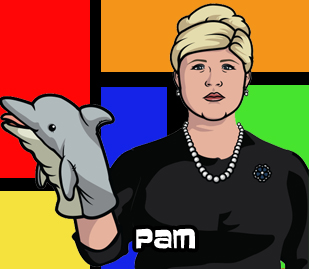 "And that's the reason I never have sex with my coworkers. That… and no one ever lets me."
Voiced By: Amber Nash

Head of HR at ISIS. Plump, boorish, and incapable of keeping secrets, yet fun-loving and, according to Archer, amazing in bed. Strongly implied to have a crush on Lana. Often seen hanging out with Cheryl, Cyril and Dr. Krieger. 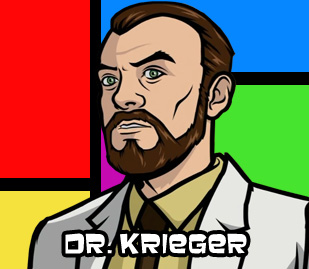 "And I love that I have an erection… that doesn't involve homeless people."
Voiced By: Lucky Yates

Gadget master for ISIS and all-around mad scientist. According to Malory, he is the son of a Nazi veteran who hid in Brazil after World War II. Not actually a genetic clone of Adolf Hitler despite early jokes to that effect. 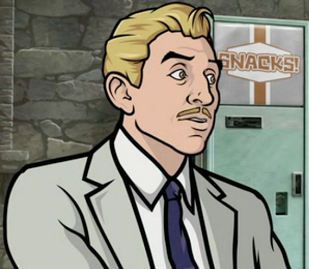 "She has never liked me. But someday I'm gonna write a book about this place. Mhm, a real smackaroonie."
Voiced By: Adam Reed

ISIS' openly gay head intelligence analyst. Possibly one of the few competent employees at ISIS. Pronounces his last name "Jill-ETTE", while everyone else in his family pronounces it "GILL-it." He has a knack of getting himself injured and/or paralysed time and time again. 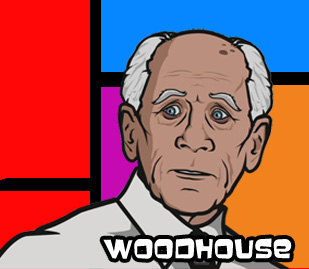 "Sir, that stolen lemur bit one of your prostitutes right in the face and she says she can't go to hospital because she's, quote, 'tripping balls.'"
Voiced By: George Coe, Roy Mc Crery (young), Tom Kane (Archer Vice onward)