This page details the main heroes of Voltron: Legendary Defender. 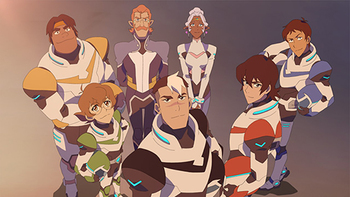 "Defenders of the Universe huh? That's got a nice ring to it." 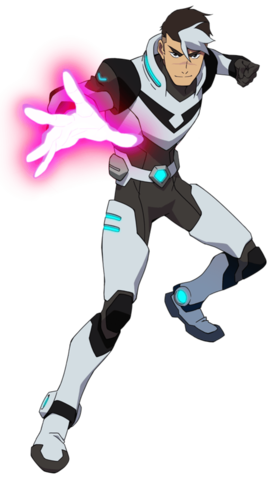 Officially titled the Guardian Spirit of the Sky, Shiro is the pilot of the Black Lion and leader of the Defenders of the Universe. He was a star pilot in the Galaxy Garrison before he, along with Pidge's father and brother, were abducted by a Galra ship on Kerberos. Shiro later became known as "Champion" after he was forced into gladiatorial combat and defeated a feared Galra warrior; he subsequently had his right arm replaced with a Galra cybernetic that can both power up Galra technology and serve as his melee weapon. Shiro escaped Galra custody and returned to Earth, where he joined his unlikely future teammates. Shiro is the most level-headed and responsible of the five pilots, and despite suffering amnesia and PTSD after escaping the Galra, he remains quite perceptive.

As the pilot of the Black Lion, he has access to the most powerful weaponry out of all the Lions. He forms the head of Voltron but initially does not have access to his Bayard as it has gone missing. To supplement the missing weapon, he uses his Galra-tech arm, which is capable of heating to high temperatures and thus is able to cut through the Mooks of the Galra Empire with ease. 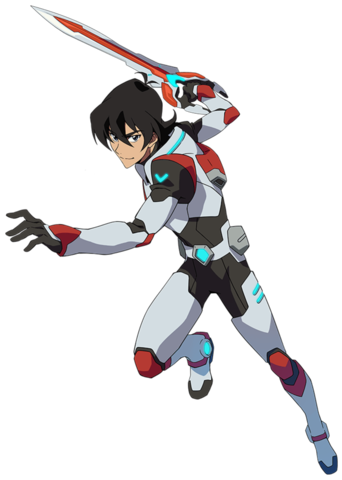 The (initial) pilot of the Red Lion and Guardian Spirit of the Fire. Keith was an elite fighter pilot in the Galaxy Garrison, Earth's space exploration program, but washed out due to a "discipline issue." Inexplicably affected by the energies of the Blue Lion, he examined ancient messages left around its hiding place and thus learned of Shiro's return to Earth. Keith respects Shiro but clashes constantly with Lance.

As the pilot of the Red Lion, his Lion is the fastest and is best suited for close-range battles, and is also equipped with a heat ray and powerful cannon. He forms the right arm. His Bayard transforms into a double-edged sword, and his special weapon for Voltron is also a sword. 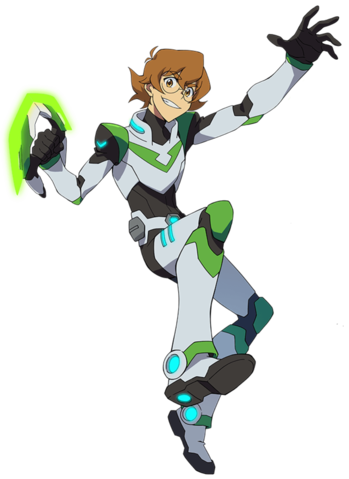 The pilot of the Green Lion and Guardian Spirit of the Forest. Pidge's brother, Matt, and father, Sam, were part of an expedition to Kerberos that also included Shiro; all members of the expedition were thought to have perished. Refusing to believe that they had died, Pidge joined the Galaxy Garrison in an effort to unravel the mystery of their disappearance. A computer genius, Pidge developed a system that can detect Galra radio transmissions, and ended up joining Team Voltron.

Pidge pilots the Green Lion, a Fragile Speedster that is excellent for subterfuge, support, and scouting, and is equipped with a weapon that can instantly generate vines to strangle enemy technology. Pidge's Bayard is a punching dagger that also functions as a taser or grappling hook. 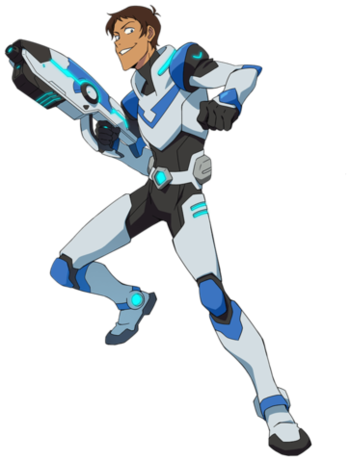 The pilot of the Blue Lion and Guardian Spirit of the Water. Lance considers himself to be Keith's rival, though he was only considered for Galaxy Patrol pilot training due to Keith's expulsion. Lance is convinced of his own superiority and quick to go after a pretty woman. Though he won't openly show it, Lance is quite homesick for Earth and his family.

He is the pilot of the Blue Lion, which is equipped with a sonic cannon and freeze ray. He forms the right leg. His Bayard transforms into either a close-range assault rifle, a long-range sniper rifle, or an Altean broadsword.

During the third season, he takes Keith's place as the pilot of the Red Lion after Keith replaces Shiro in the Black Lion. 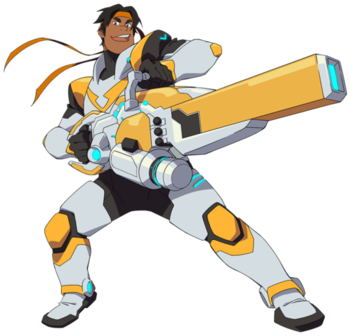 The pilot of the Yellow Lion and Guardian Spirit of the Land. Hunk initially seemed an unlikely candidate for a Voltron pilot, as he disdains dangerous situations and suffered from motion sickness. However, he is also a skilled mechanic who was able to process data collected by Pidge to create a "Voltron Geiger counter" that helped the group find the hidden Blue Lion. Hunk fills the primary role of Comic Relief on the team, but over the course of the first season, he becomes more willing to his role as the Yellow Paladin and becomes more heroic.

He is the pilot of the Yellow Lion, which not only has powerful digging abilities but has the strongest armor of any Lion. He forms the left leg. His Bayard transforms into a type of laser machine cannon, and his special weapon for Voltron is a shoulder cannon. 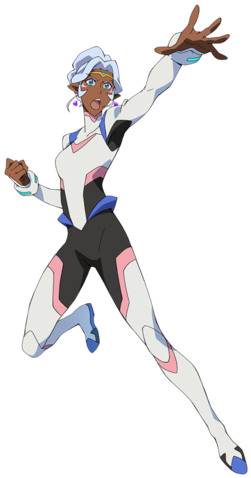 The princess of the fallen Altean solar system and the last known female Altean, who spent 10,000 years in stasis on the planet Arus. When Altea was attacked by the Galra Empire, Allura was in favor of forming Voltron and fighting the invaders, but her father chose to scatter them and had Allura placed in stasis. As such, Allura is driven to defeat the Galra Empire and drives the new Voltron Paladins hard in an effort to shape them into the force needed to save the universe from her ancient enemies. Allura's attire varies between a blue and white dress and a black and white jumpsuit with pink highlights; she is often accompanied by a group of Altean mice who were in her stasis chamber with her and thus developed a curious mental connection to her.

when Allura wields it.

Allura's royal advisor, in charge of the Castle Control and the last known surviving male Altean. Coran is boisterous and confident, but his efforts to appear intelligent are sometimes undermined by his occasional buffoonery. That being said Coran is a constant pillar of support for both Allura and the Defenders of the Universe, assisting them with training, operating the castle and providing knowledge on various galactic matters. 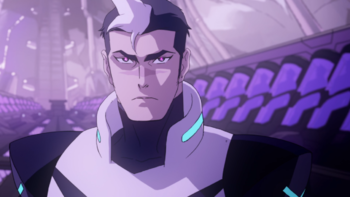 A clone of Shiro created by Witch Haggar as part of Operation: KURON. He is released from his prison in the Season 3 episode The Journey and "reunites" with Team Voltron. He thinks he is the original Shiro and does not show any major personality changes, but is initially unable to pilot the Black Lion. Later the Lion gives him permission to fly it.

In Season 6, Haggar's plan is fully revealed and she takes control of his body entirely. Eventually, he is defeated and the original Shiro's spirit is transferred into his body. 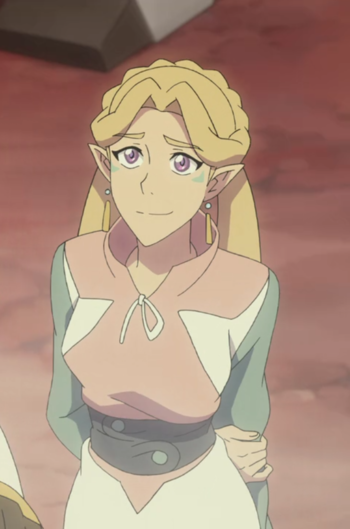 An Altean from a hidden colony created by Lotor to hide the survivors of Altea's destruction from Zarkon's wrath. 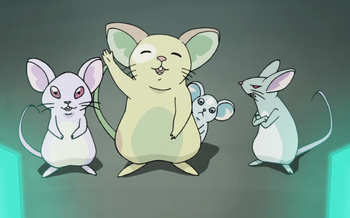 Four Altean mice that were frozen alongside Allura for 10,000 years. From left to right there's Chuchule, Platt, Chulatt, and Plachu. 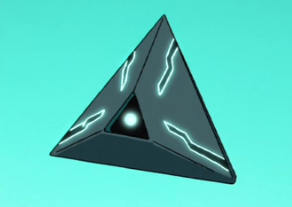 A Galra drone Pidge reprogrammed for friendly use. 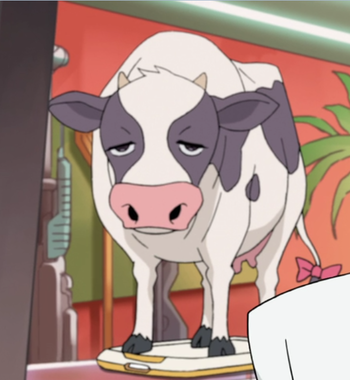 A cow Lance and Pidge got in a deal from an earth vendor at the Space Mall. 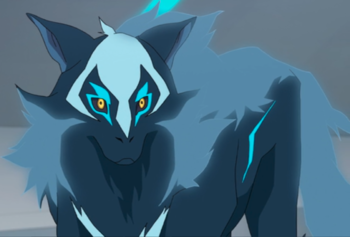 A cosmic wolf that Keith adopts in Season 6.