WARNING: Unmarked spoilers from seasons 1 and 2 abound. Venture forth at your own risk. 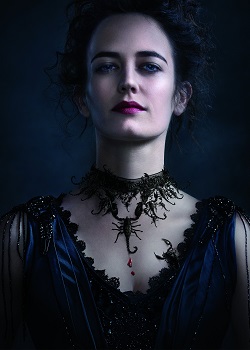 "We here have been brutalized with loss. It has made us brutal in return."
Played By: Eva Green

Poised, mysterious, and utterly composed, Vanessa is a seductive and formidable beauty full of secrets and danger. She is keenly observant — clairvoyant, even — as well as an expert medium. Her supernatural gifts are powerful and useful to those around her, particularly Sir Malcolm, but they are also a heavy burden. Her inner demons are very real to her and everyone around her, and they threaten to destroy her relationships, her sanity, and her very life. 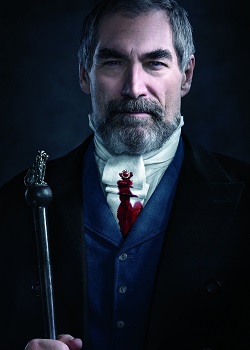 "With me, you will behold terrible wonders."
Played By: Timothy Dalton

A hardened explorer and veteran of several surveys into darkest Africa, Sir Malcolm is a hunter on a deeply personal quest. Although he is wealthy and renowned, Sir Malcolm's exploits have taken a deep toll on his family, and although his stately home is filled with marvelous souvenirs of his travels, it is devoid of loved ones. With Vanessa's help, he is determined to right the wrongs of his past, but his toughest journey lies ahead. 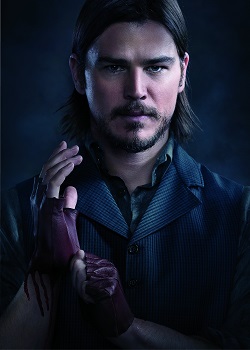 "We've all done things to survive. I've such sins at my back it would kill me to turn around."
Played By: Josh Hartnett

A charming American who finds himself trapped in the darkest corners of Victorian London, Ethan's charm and brash ways are catnip to the ladies, but behind Ethan's bright eyes lurk dark secrets. He is running from something, and his troubling past threatens to overtake him at every turn. 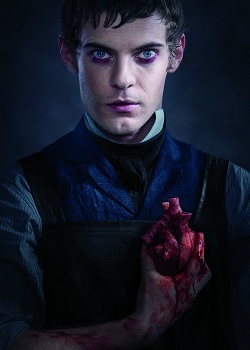 "If you seek to threaten me, threaten me with life."
Played By: Harry Treadaway

More Romantic poet than surgeon, Dr. Frankenstein is a tender, gentle soul who is fascinated by the mysteries of life and death. He has dedicated himself to researching what makes something live, and has sacrificed everything for his scientific pursuit. But he is playing with fire, and his research pays off in shocking ways with devastating consequences. 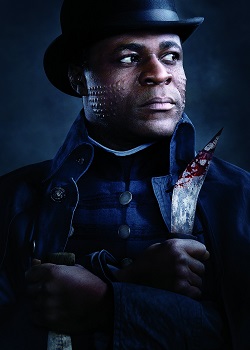 "Where I come from, we know: some people cannot be saved."
Played By: Danny Sapani

Sembene is an African man with ritual face scarring who serves as Sir Malcolm's sentry and confidant. He has an air of mystery about him, and his heroic efforts prove invaluable to Sir Malcolm in his adventures. 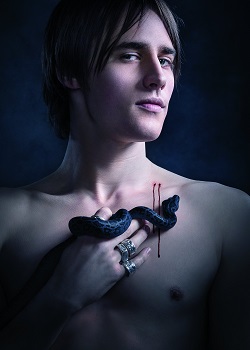 "To be different, to be powerful. Is that not a divine gift?"
Played By: Reeve Carney

Dorian Gray is an immensely wealthy young socialite who is almost unnerving in his beauty. His skin seems to radiate a golden glow of intoxicating youth and promise. A hedonist of reckless abandon, he has a devil-may-care attitude that borders on dangerous. Nothing seems to faze him, nor are any risks too great. In fact, he is unnaturally drawn to them. 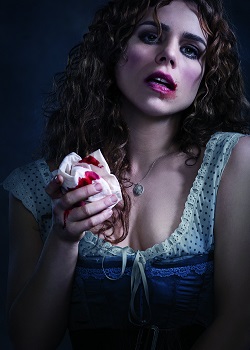 "Me lungs are buggered. I'd like to say it was from the dire working conditions of the factory; but it's more likely God being a right playful fucker."
Played By: Billie Piper

Brona is a poor Irish immigrant who came to Victorian London in order to try and escape a dark and sordid past. The Gaelic meaning of her name is "sadness," yet she remains lovely, spirited, and erotically alive. She forms a bond with Ethan Chandler, who will do anything for her.

In Season 2, she is reanimated as the Creature's intended bride and renamed Lily. Lily is seemingly innocent and naive, but at the same time curious and possesses great intellectual capacity. She dotes on her "cousin" Victor, but shies away from the odd John Clare. Later, she strikes up an acquaintance with Dorian Gray. Her naivety is shown to be an act in "Memento Mori", where it is revealed that she not only remembers Brona's life, but harbours quite a bit of inner fury. 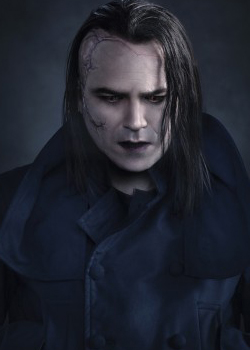 "Do not test me, Frankenstein. You have not known horror until I have shown it to you."
Played By: Rory Kinnear

Dr. Frankenstein's original creation, the Creature is a hideous, humanoid monster who nevertheless has a deep and anguished soul. His horrible appearance and unusual "birth" have left him a lonely, misunderstood outcast, and he is furious at his creator over his unfortunate fate.

Sir Malcolm's daughter. The hunt for her after she has been apparently abducted by something not of this world drives the plot of the first season.

Sir Malcolm's son, who died during an expedition in Africa prior to the series.

Malcolm's estranged wife and the mother of Mina and Peter.

Acquaintances and Loved Ones

Angelique is a glamorous and upbeat young lady who is intrigued by Dorian Gray and intrigues him in return. She works in an upscale brothel and seems to have exclusive clients with "special" interests. It’s eventually revealed that Angelique is transgender.

A noted Egyptologist, he is consulted by Malcolm and Vanessa in regards to the hieroglyphs found on the vampire corpse.

Dr. Seward is a practitioner of the relatively new science of psychology (or "alienism", as it was called then), to whom Vanessa is sent by Ferdinand Lyle to help her break out of her ennui and depression.

A childhood friend of Victor, who comes to his aid in his darkest hour.

An Apache from New Mexico, he tracks Malcolm down in Zanzibar to ask for his help in retrieving Ethan Chandler from the clutches of his father.

A fiery, mysterious, independent woman currently working in London as a thanatologist, recommended to Vanessa by their mutual friend Mr Lyle.

A teenage girl Lily and Dorian save from getting tortured to death in a live snuff show. She currently lives in the Gray estate as their acolyte and foster child.

Inspector Bartholomew Rusk
Played By: Douglas Hodge
"More and more, I think this is all some... sort of phantom limb. Something is going on here which is not an actual arm or leg. Something not quite real... but completely true."

An inspector from Scotland Yard bent on apprehending the man responsible for the Mariner's Inn Massacre. His path crosses with Ethan's often, eventually becoming the American's hunter and nemesis.

Jared Talbot
Played By: Brian Cox
"You brought the Devil to my doorstep, son, and you gave him the key."

The owner of a waxworks museum that hires the Creature, Putney is a man who's a lot darker than he first appears, and possesses ambitions greater than simple grotesqueries rendered in wax.

Lavinia is the daughter of Oscar Putney, the man who hires John Clare as a custodian. Despite her blindness, Lavinia is a skillful artisan, crafting wax faces after the likeness of famous people, such as Prime Minister William Gladstone. In contrast to her devious parents, she is friendly and caring, and strikes up a tender friendship with John... until her true colours are revealed.

Warren Roper is a Pinkerton Detective hired by Jared Talbot to bring Ethan back to America. Barely surviving an encounter with Ethan's wolf form, Roper doggedly continues his mission with a thirst for revenge. 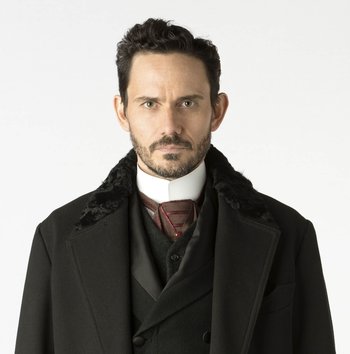 "Give me your flesh. Give me your blood. Be my bride. And then all light will end, and the world will live in darkness. The very air will be pestilence to mankind. And then our brethren, the night creatures, will emerge and feed. Such is our power. Such is our kingdom. Such is my kiss."

The most evil and powerful vampire of all, Dracula is one of the two fallen angels that are seeking Vanessa to be the "Mother of Evil" — the other being Lucifer.

A shadowy presence that has plagued Vanessa for years, who is eventually revealed to be the original fallen angel: Lucifer, aka Satan. No matter which name he goes by, the Demon desires to join with Vanessa and bring about the End of Days. 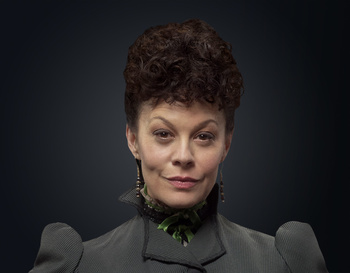 "My beloved Lucifer, I have found her for you and she shall be yours. I shall assault her days and her nights, her dreams and her prayers. No corner of her soul shall be safe. Every beat of her heart, she shall know only suffering... I will not fail you."

A mysterious widow-turned-spiritualist who first appears in season one and becomes the Big Bad of season two, leading a coven of witches known as the Nightcomers. 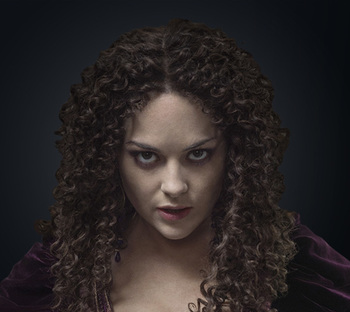 The daughter of Evelyn Poole and a fellow witch in the coven.
Renfield
Portrayed By: Sam Barnett

The young secretary of Dr. Seward, he seems an unassuming man, but he quickly finds himself under the sway of a far darker power in need of his services.

Proteus
Portrayed by: Alex Price
Victor, what am I?

The creature created by Dr. Frankenstein at the end of episode one, Proteus is a sweetly naive man who is thrilled to learn more about the world he's been born into.

The impresario of the Grand Guignol Theatre, he takes pity on a homeless Caliban and offers him a job as a stagehand.

A young actress at the Grand Guignol who is the secret object of Caliban's affection.

A renowned haemotologist that Malcolm arranges for Victor to consult with on the potential cure for vampirism.

A hedge-witch living on the remote moors of Devon, Vanessa sought her out before the events of the show to learn witchcraft.