Party members that can be recruited in Baldur's Gate II and their associated tropes. For other characters, see here. Warning: Here there be spoilers! 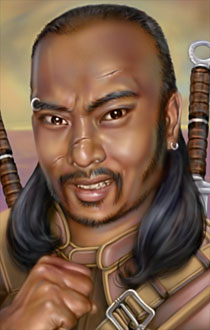 Yoshimo is an adventurer and swashbuckler from Kara-Tur, who joins your party in the first dungeon in the second game after having escaped a fate as experimental subject by whoever runs the place. Being the pre-Extended Edition game's only single-class thief, and a generally easygoing character on top of it, Yoshimo fits into pretty much every party. 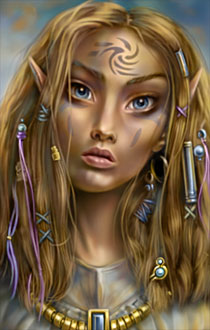 "My wings have been clipped... oh, I wish you could understand how it feels to be bound to the ground, chained and weighted like a miserable prisoner of earth..."
Voiced by: Kath Soucie
Race: Elf (Avariel)
Class: Cleric/Mage
Alignment: Lawful Good
Place of origin: Faenya-Dail, an avariel colony high in the mountains

Aerie is another romanceable character; a potentially powerful cleric/mage with a sweet demeanour but a very traumatic past. She's an Avariel, a winged elf, captured by slavers and had her wings clipped off to preserve her life, until the Gnome Illusionist Quayle rescued her and adopted her as his niece. She joins the player character's party when they are investigating her circus which was under the illusion of another gnome named Kalah. She struggles with life on the ground, but manages to move on eventually, much more easily if she gets romanced by a nice male player character; otherwise she has to go through disillusionment and frustration first. She doesn't get along with Korgan, and may also develop a romance with Haer'Dalis. If romanced with a male player character, she gives him his first son and has one of the happiest endings amongst the entire roster. 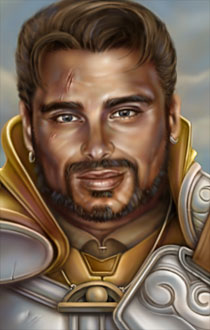 "A dank pool of base corruption if ever there was one. Why, if not for the Order, the gods would surely smite man for such sins."
Voiced by: Rob Paulsen
Race: Human
Class: Dual-class Fighter/Cleric
Alignment: Lawful Neutral
Place of origin: Athkatla

Ah, Anomen. Squire of The Order of the Radiant Heart. Jerkass extraordinaire. Pompous, arrogant, insufferable and vain. He's on a quest to become a full knight. He's the only option for a female Bhaalspawn romance. Hurrah. Still a decent character gameplay-wise, though. And don't worry, there's his personal quest that if you do it right, he'll be A LOT more tolerable. 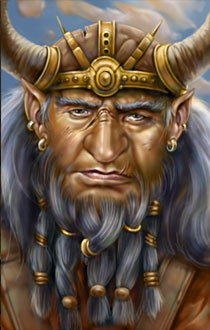 "Those grog-blossomed prickmedainties 'ave crossed me one time too many! We've some walking undead to dispatch, now, and then some live dead to find and bury!"
Voiced by: Bill Martin
Race: Dwarf
Class: Fighter (Berserker)
Alignment: Chaotic Evil
Place of origin: Unknown

A bloodthirsty dwarven berserker, essentially the evil Foil to Minsc, and first recruited as a mercenary in the Copper Coronet. He is generally considered a pain to deal with by other teammates, particularly the women. Ironically, he is sexually interested in Mazzy, the closest thing there is to a halfling paladin. Bizarrely, of every character in BG2, Korgan is the only one who has no special ability or unique item, being only a dwarven berserker. 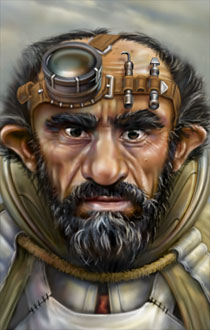 "It's not every day that a gnome finds himself fighting in the Abyss and talking to a solar. I haven't done that for at least a year, now."
Voiced by: Jack Roth
Race: Gnome
Class: Illusionist/Thief
Alignment: Chaotic Neutral
Place of origin: Athkatla

Jan Jansen is a gnomish peddler of turnips and illegal weaponry (but he's really more interested in the turnips). Much beloved by the fandom for his many quotes as well as his interactions with the other fan favorite character, Minsc, Jan is one of Baldur's Gate II's most recognizable characters. 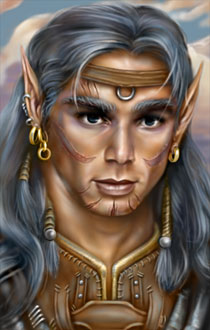 "My dear raven, valiant as always. You are poetry, you are song!"
Voiced by: Michael Bell
Race: Tiefling
Class: Bard (Blade)
Alignment: Chaotic Neutral
Place of origin: Sigil, the City of Doors

Haer'Dalis is a Doomguard: essentially he knows the universe is going to end no matter what he does, so he's just enjoying himself until that happens. He's a bard in a traveling actor's troupe who joins you after you rescue him, perhaps sensing there are tales to be had following in your footsteps. 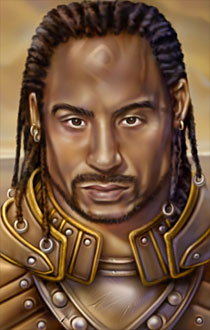 "My family was cursed during its existence. If I am the last of the Corthalas, it will be a well and good thing."
Voiced by: Jeff Osterhage
Race: Human
Class: Ranger (Stalker)
Alignment: Neutral Good
Place of origin: Athkatla

Valygar is from a long line of mages, started by his insane evil dimension-traveling necromancer ancestor Lavok. Magic destroyed every single member of his family except himself, and as a result he became a ranger to put an end to his immortal evil ancestor. 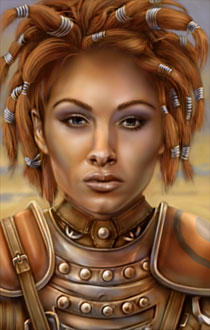 Mazzy is a halfling fighter and Truesword of Arvoreen, the halfing god of defense — she would be a paladin if AD&D rules had allowed or it. As it is, she's the closest thing to a halfling paladin possible. She's beyond good, among the most goodhearted and forthright of your companions. She traveled with a previous adventuring party until their defeat at the hands of the Shade Lord. She follows you mostly because you saved her life. 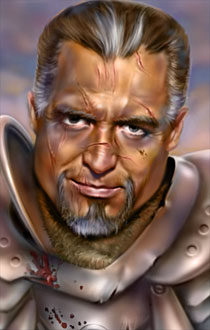 "Do not take honor in fighting with my presence. Take honor in that you fight for good, for that is my source of strength."
Voiced by: Roger L Jackson
Race: Human
Class: Paladin (Inquisitor)
Alignment: Lawful Good
Place of origin: Athkatla

Keldorn Firecam is the paladin of the Baldur's Gate series. The classical Knight in Shining Armor, Keldorn strives to do good and remain honourable in all his dealings, but when the law directly affects him and his family things become more complicated. 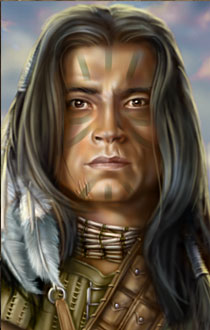 "A bird in hand gathers no moss... or... some such."
Voiced by: Jason Marsden
Race: Human
Class: Druid (Shifter)
Alignment: True Neutral
Place of origin: Athkatla

Cernd is a druid who intentionally inflicted himself with lycanthropy for... some reason. Despite being an okay guy, his lack of personality quirks and defining traits beyond lots of nature similes makes him quite... hmm... wait, whom were we talking about again? 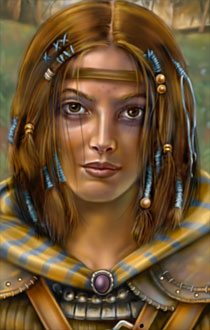 "I'm going to be someone that gives to the poor and takes from the rich, I am. We've got lots to spare... and it's fun, too."
Voiced by: Grey Delisle
Race: Human
Class: Dual-class Thief/Mage
Alignment: Chaotic Good
Place of origin: De'Arnise Hold

A runaway noblewoman who hates her arranged marriage and wants to support the peasantry, she nevertheless tends to unintentionally think of herself as above them. She joins the party after they destroy the trolls and Yuan-ti that invade her keep

"I dunno what you were expecting, but as a sword I'm pretty one-dimensional in what I want!"
Voiced by: Jason Marsden