The Player Character and recruitable party members that appear in both Baldur's Gate games. Warning: Here there be spoilers!

"Is it true dragon meat tastes like chicken? Never mind, I'll find out for myself."

The player character is known throughout the game as "The Bhaalspawn" and "Gorion's Ward", and among the fans as Charname due to the name variable in the game's files.

Born shortly before the Time of Troubles, the player is raised by the wise archmage Gorion in the secluded fortress of Candlekeep at the Sword coast. After never having set one foot outside the isolated citadel in all of your twenty years of childhood, one day your foster father suddenly decides that the two of you have to leave home and hearth behind and venture into the outside world - only to be ambushed by a mysterious masked warrior the moment you have left who demands to have you handed over to him. Your father fights against the unknown enemy, but eventually is overwhelmed and killed, while you escape. Starting with a local iron crisis and the mysterious and sudden appearance of metal-mongering Bandits who roam the area, you embark on a quest to find your destiny in life, the man who murdered your father and maybe even a hint at who your birth parents were. The answers lie hidden in the local city of Baldur's Gate...

One year later, having dealt with the troubles that plagued the Sword coast, slain the man who killed your father and discovered your true heritage, you and your loyal friends and companions Imoen, Jaheira, Khalid, Minsc and Dynaheir are suddenly ambushed by a powerful mage of overwhelming power and imprisoned in his dungeon, where he proceeds to torture you, until you manage to escape at least and find yourself at the foot of the city of Athkathla, the capital of Amn. Who was the wizard who entrapped you and your friends? Why is he interested in you? Where did he whisk your childhood friend Imoen away, who rescued you in the first place? Setting out in a new land with a new party, you proceed once more to chase an enemy of incredible power, while he himself chases you... 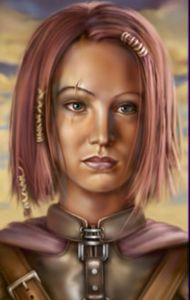 Imoen is your childhood friend from Candlekeep who has known you longer than anybody else. Having accidentally stumbled upon a letter Gorion received shortly before you left, she decides to help and stick with you through thick and thin. A perpetual child, Imoen is naturally at home in an adventurer's party and always there to cheer you and the other party members up with a joke.

In Siege of Dragonspear, after Sarevok's defeat, she begins studying magic with the guidance of Grand Duchess Liia Jannath. Because she must put all her energies into her magical studies in order to advance her thief skills (according to the game's mechanics), she is not available for recruitment.

A year later, after having been taken captive by Irenicus along with the rest of Charname's canonical party from BG1, she is eventually the first one to rejoin you once you set out to escape his dungeon. However, stumbling upon the evil wizard himself at the exit, she attempts to drive him off with magic and is (as is Irenicus) promptly taken into custody by the Cowled Wizards, the mage guardians of the city Athkathla. She doesn't bode yet that she is going to play a bigger role in the ensuing conflict than she could (or would like to) imagine... 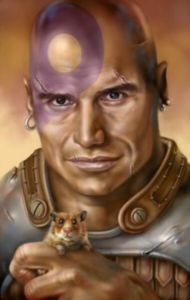 Minsc is easily the most popular character in the series despite having very little effect on the plot. He's a good-hearted Ranger and Berserker from the far east country of Rashemen who was hit on the head in a sneak attack and later sold a "miniature giant space hamster" named Boo, who, as he claims, gives him advice on his travels. He came to the sword coast as the bodyguard of a witch (spiritual leaders who govern Rashemen) named Dynaheir for reasons he doesn't really understand, but he is determined to fulfill his duty. In the first game, he may enlist the protagonist's help in rescuing her from a pack of Gnolls which has taken Dynaheir captive and afterwards accompany him on his adventures, along with his charge.

He makes a return in Siege of Dragonspear to fight against Caelar and her crusade. Again, he has little to offer as far as plot goes, but the game simply wouldn't be complete without him.

Minsc was in Charname's canonical party in BG1. When Jon Irenicus takes the party captive at the beginning of the second game, he kills Dynaheir solely to spite Minsc, who decides to further accompany the player, partly to avenge Dynaheir, partly because he can't return to his homeland after having failed in his duty so badly.

Although it rarely comes up, Minsc is the most loyal of your sidekicks after Imoen.

Minsc's miniature giant space hamster, bought from a completely trustworthy merchant after he'd taken a blow to the head. Boo forms the brains of the Minsc-Boo duo, directing Minsc's wrath... or so Minsc says. While it's technically possible that Minsc is correct about Boo being from space, all evidence points to Boo being a normal, if brave, hamster. 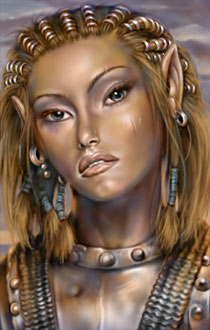 "You are amusing, in a "what the hell is wrong with you" kind of way."
Voiced by: Heidi Shannon
Race: Half-Elf
Class: Fighter/Druid
Alignment: True Neutral
Place of origin: Tethyr

Jaheira is a half-elven druid of Silvanus (the Forgotten Realms' main nature god), but also a member of the Harper organization and one of your late foster father Gorion's good friends. Having been named your godmother in your absence, she offers to join your party along with her husband Khalid, so as to help you in your travels along the Sword coast. In direct contrast to her husband, Jaheira is a very forceful and insistent person with a strong sense of Right and Wrong who will not hesitate to lecture other people on their beliefs, should she deem it necessary.

In Siege of Dragonspear, she and Khalid are assigned by the Harpers to go to Bridgefort and help out with the fight against the crusade, but they are separated. She will direct you to a wardstone with which you can access the inside of the fortress and meet up with her husband.

Having been in the protagonist's canonical party in BG1, Jaheira is captured, along with the rest of the party by Irenicus at the beginning of Shadows of Amn. Having been separated from Khalid during captivity, she finds his dead body during your exploration of Irenicus' dungeon. Afterwards, she joins for the dual purpose of revenge and helping you - in possibly more than one way. 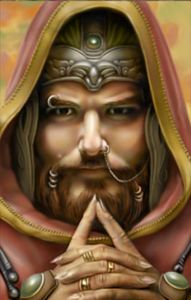 "(Sigh. It's aggravation like this that will eventually cause me to fireball the entire party as they sleep. Yes indeed, everyone peaceful and quiet and then FOOM!)"
Voiced by: Jim Meskimen & Tress MacNeille.
Race: Human
Class: Mage (Conjurer)
Alignment: Lawful Evil
Place of origin: Thay

Edwin is a member of the Red Wizards, an order of sinister mages who rule the country of Thay to the far east. He has been originally sent to the Sword Coast to dispose of a Rashemi witch named Dynaheir (Minsc's charge) for reasons unknown, but, like most of his fellow Thavyans, he is not above trying to expand his own power and influence among the local people while he's at it (although he is clearly too ambitious for his own good here). His skill in the arcane arts is enormous, matched only by his own hubris and lack of common sense. Arrogant and petty, but not without natural charm, Edwin can offer the protagonist his service for one year in exchange for helping him track down his target.

In Siege of Dragonspear, he is on the run from the crusaders after some of his fellow Red Wizards are killed by them. Another Red Wizard has also joined the crusader's cause, and so he is (kind of uncharacteristically) determined to see his fallen comrades avenged.

A year later, having canonically failed to slay Dynaheir (who was the Bhaalspawn's companion instead), Edwin has left the Sword Coast in favor of a position among the Shadow Thieves of Athkathla. Still scheming his way to power, but barely having become more competent doing so, he has not forgotten his meeting the protagonist and may once again join him on his adventures, for better or worse.

"Trust is for the foolish. And the dead."
Voiced by: Grey Delisle
Race: Elf (Drow)
Class: Cleric
Alignment: Neutral Evil, potentially True Neutral as of Throne of Bhaal
Place of origin: The Underdark

Viconia is a Drow, a race of Always Chaotic Evil elves with dark gray skin and silver hair who live beneath the earth. Having fled her homeland due to a string of conflicts with rival families and her God of Evil, she is now wandering the surface by herself with no purposes beyond surviving in a land foreign to her both in appearance and in customs. Unlike most of her kin who have fled to the surface though (such as the famous Ranger Drizzt Do'Urden), Viconia is by no means intending to leave her nature behind her and become a good person. Rather, she has become a loyal follower of the dark goddess Shar, the Mistress of the night, worshipping whom has become one of the few distractions in her otherwise lonely existence. Still learning that the surface world is only marginally less dangerous for outlaws than her homeland, the protagonist may earn her companionship by saving her from a Flaming Fist Mercenary who deems her a threat.

In Siege of Dragonspear, she is found in the company of duergar mercenaries who have recently been hired to fight against the oncoming crusaders. They treat her less like a companion and more like property, however, and she can be easily persuaded to join your company instead.

Even one year later, life hasn't improved much for the exiled Drow priestess. Having suffered yet another string of bad luck, she was forced to flee the Sword Coast for Athkathla, where she was hunted down by a mob of peasants which has gathered to burn her at the stake just as the Bhaalspawn happens to be passing through. In need of the protagonist's help once more, Viconia will offer to join his party and take up arms again, with her the suspicion of society, a sharp tongue and potentially more than a passing interest in her savior...