Magic Versus Science
aka: Science Versus Magic 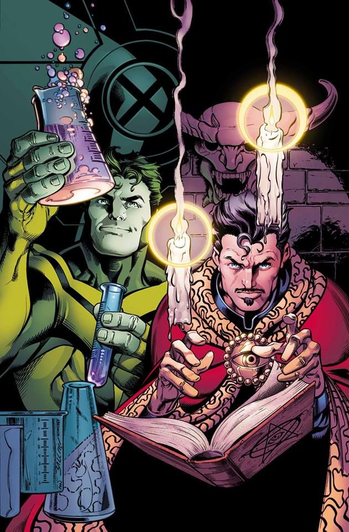 Magic is often seen as the realm of mysticism and a violation of scientific laws. Science is often seen as the realm of materialism and technology. These two realms are often viewed as unresolvable opposites; where magic holds sway, science must fail and where science holds sway, magic must fail. This trope builds on the potential factors that cause a divide between the "science" and "magic" in a work. However, please keep in mind the rules of Clarke's Third Law and the inverse law; there isn't really a difference between the concepts, except for their presentation in the story.

In many stories, modern technology (often called "science") is placed in opposition to the will of a person influencing the universe (often called "magic"). This divide can build into The Magic Versus Technology War, where both sides of the debate attempt to eliminate the other side. Stories which present the divide often use one or more reasons for the separation, summarized here:

Compare the following tropes: Doing In the Wizard for when seemingly magical manifestations are explained as science. Doing In the Scientist for when scientific anomalies are later explained as magic. Maybe Magic, Maybe Mundane for when the phenomenon is inadequately explained either way and the characters just can't tell. Fantastic Science for when the scientist begins to make magic their field of study. Post-Modern Magik for when the magic takes cues from technology. Contrast Scientifically Understandable Sorcery where the magic and science use the same rules but different energy sources and methods, and Sufficiently Analyzed Magic where magic is treated as a science.

To see Magic A Versus Magic B, there's Unequal Rites. If you were looking for a trope where scientists and wizards actually get into a brawl, see The Magic Versus Technology War. Science Fantasy is a genre for the heavy mixing of the two, which may or may not contain such a war. How Unscientific! is a violation of Genre Consistency that allows a work to temporarily operate as Science Fantasy. Contrast with Magitek , where both magic and science are used in combination.