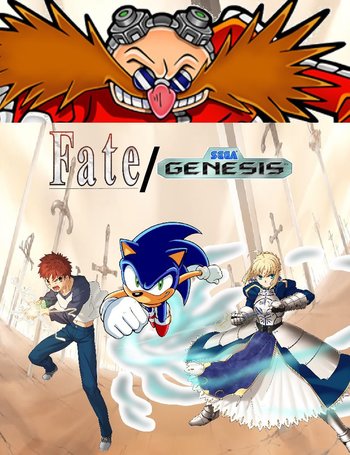 "This is going to be a very different war."
—Saber

While on a routine foiling of Dr. Eggman's latest bid for world domination, Eggman's superweapon malfunctions, sending the Sonic crew to the Nasuverse- specifically, Fuyuki, at the beginning of the Fifth Holy Grail War. Sonic and Tails get wrapped up with Shirou's group, Knuckles falls under Caster's influence, and Amy Rose finds Bazett Fraga McRemitz.

But the Chaos Emeralds have also arrived in Fuyuki, setting off a new race for power. And Dr. Eggman is still up to his old tricks. What kind of outcome awaits, now that the Holy War has been set on a new route?

Not to be confused with the Fate/Genesis Roleplay