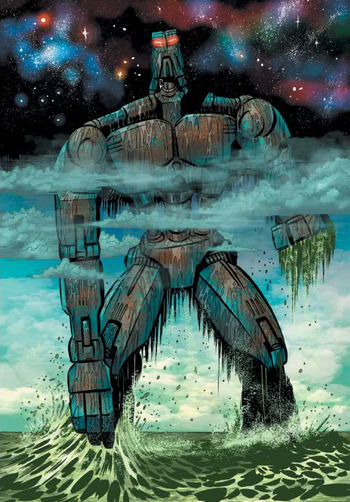 Mecha themselves are usually divided between the "Super Robot Genre" and the "Real Robot Genre", depending on the kind of sci-fi, though there are as many different kinds of settings for mecha as there are genres of fiction. It should be noted that, while often referred to as robots, many mecha are functionally more like vehicles, controlled either remotely or from within by a pilot instead of being pre-programmed or autonomous.

For those of you wanting to create your own Humongous Mecha story, we've got you covered. While not a reality yet or likely to be... Japan is working on it.

And so is the US.

It's worth noting that the amount of Friendly Fandoms in the genre is huge; in fact, most hardcore fans describe themselves as "mecha fans" rather than belonging to any certain franchise fandom.

The most powerful mecha in Gurren Lagann is one the size of an entire universe, which is formed after they absorb the Anti-Spiral's attack that is as powerful as a Big Bang.

The most powerful mecha in Gurren Lagann is one the size of an entire universe, which is formed after they absorb the Anti-Spiral's attack that is as powerful as a Big Bang.