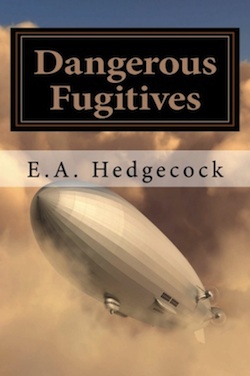 The HMAS Verne
The only thing that noticed their absence was the morning paper a couple of days later. A small square on the bottom of page 17 simply announced, “Missing: Dangerous Fugitives.”

The story begins with the revelation that in this world, and the country of Erivale, creativity in all its forms has been banished (following the Joyce riots of 1943, 1946, and 1951). A group of six artists have been living under the radar for years, posing as ordinary people until one of them, Thomas the Painter, has his shopping list intercepted by the police and is arrested and framed for the murder of a soldier's wife. Two are arrested then, one is killed, and the remaining three vanish without a trace.

At least, until a couple of years pass and they're picked up, one of them near-death, by the pirate airship the HMAS Verne.

A rollicking good adventure story with tear jerking romances, a monarchy with secrets of their own, and one of the darkest and most detestable villains in literature today.

Can be purchased here