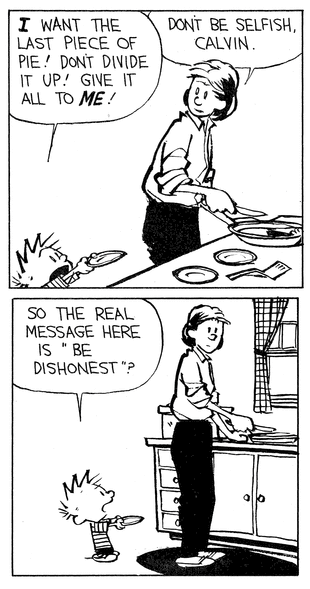 Maybe the message is that pie is tasty.
"... I leave it to be settled by whomsoever it may concern, whether the tendency of this work be altogether to recommend parental tyranny, or reward filial disobedience."
— Jane Austen, Northanger Abbey (final line)

Everyone knows the Stock Aesops: Be Yourself; appreciate what you have; people are more important than things; follow your dreams. Sometimes, these morals contradict each other, but nobody is surprised to see any of them in a story. However, sometimes a story aims to teach a lesson well outside the pale of accepted wisdom. For example, "No Good Deed Goes Unpunished", "It's okay to Be a Whore to Get Your Man," or "Sometimes Violence Really Is the Answer".

"Family-Unfriendly" does not necessarily mean "wrong": the lesson may be both true and well-supported in context, but it frequently jars the audience since they weren't expecting it. After all, most shows, especially ones aimed at children, teach viewers that they should help the less fortunate, be modest, and solve their problems without coming to blows.

When your work promotes a lesson that is seldom taught and/or contradicts general morality, you have a Family-Unfriendly Aesop. Your audience may not be able to argue that you're "wrong", but they'll still walk away feeling a bit uncomfortable.

Note that being "jarring" is not necessarily the same as being pessimistic. Some more optimistic Family-Unfriendly Aesops might be, for instance, "peer pressure is good for you because it convinces you to try new things" (or, conversely, "Rejecting the wisdom of the crowd could end badly,") or, "Having sex reduces stress and makes you happier, so go have some." Note also that how the Aesop is conveyed may be what makes it family-unfriendly: for instance, Good People Have Good Sex almost always gets a far friendlier reception from Moral Guardians than You Need to Get Laid, though both promote sex as a good thing.

A Family-Unfriendly Aesop is not the same as a Clueless Aesop, which is a moral (usually a family-friendly one) presented so ineffectively that the audience either misses the point or doesn't find it at all persuasive. When delivered straight and effectively, the Family-Unfriendly Aesop jolts the audience entirely because the message they figure out is exactly the one the writers wanted them to catch. Nor is it the same as Broken Aesop, wherein a show contradicts or otherwise undermines its own (again, usually family-friendly) moral. An unusual moral also doesn't count if it's played for laughs (Spoof Aesop).

Due to Values Dissonance and Society Marches On, a moral that is family-unfriendly in one time and place may be very family-friendly in another (or vice versa), especially morals about social mores or civil rights (see Fair for Its Day). This list is for morals that were family-unfriendly even for the culture for which they were written. A prime target for dropping anvils.

See also Unfortunate Implications and The Complainer Is Always Wrong.

Note: Understand that not everything needs or has an Aesop. A depiction is not an endorsement; a character behaving in a certain way does not mean the show is saying that behavior as good (let alone telling the audience that they should do the same). If you are drawing absurd conclusions from a story which doesn't have a moral, take it to Warp That Aesop on Darth Wiki.