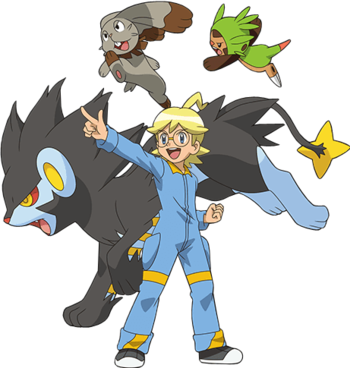 The new boy for the XY series, and Bonnie's older brother. Gadgeteer Genius extraordinaire, his inventions have helped Ash on more than one occasion. He is also the true Gym Leader of Lumiose City. 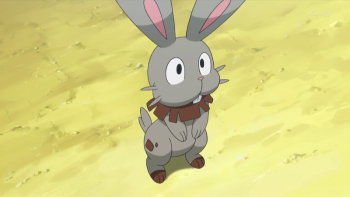 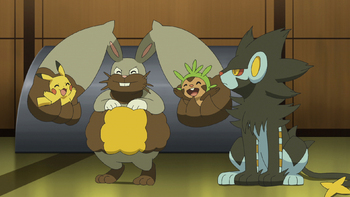 Voiced in Japanese by: Chinatsu Akasaki
Voiced in English by: Alyson Leigh Rosenfeld

Bunnelby is a Pokémon that Clemont recently caught before meeting Ash. When asked by Ash what type of Pokémon he has, Clemont only showed him Bunnelby and he's the first Pokémon that Ash battled in the Kalos region. By the time he's return in 'Journeys', he is now Diggersby 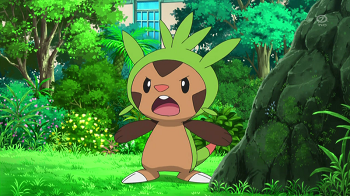 Voiced in Japanese by: Hitomi Nabatame
Voiced in English by: Suzy Myers

Chespin is one of the starter Pokémon at Prof. Sycamore's lab. When Ash and the gang return back to Prof. Sycamore's lab, Chespin steals Serena's basket of macarons and eats them for itself. After he witnesses Team Rocket kidnap Prof. Sycamore and, unintentionally, Serena and Bonnie, Chespin helps Ash and Clemont track down Team Rocket. When Chespin's life becomes endangered by Team Rocket's mecha robot, Clemont saves him and they start to bond. After defeating Team Rocket, Chespin wishes to join Clemont's team which he accepts. 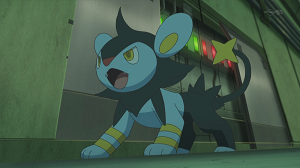 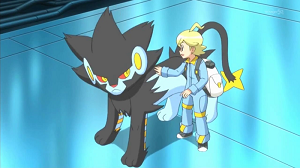 Luxray is a Pokémon that Clemont used to play with in his younger years before evolving from a Shinx. They reunited in Kalos after he evolved into a Luxio. Upon evolving into Luxray, it serves as Clemon't new Ace Pokémon.

Voiced in Japanese by: Kiyotaka Furushima
Voiced in English by: ????

The original Ace Pokémon of Clemont, and used frequently as Clembot's ace. 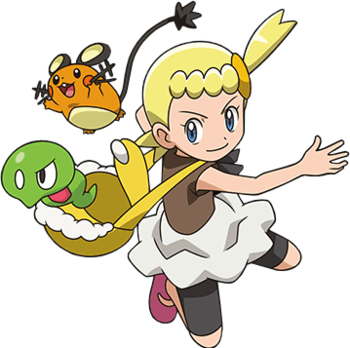 Clemont's little sister and another sidekick for the XY series. She's too young to own a Pokémon of her own yet, but has a willing spirit to help out in any way she can. With a bottomless curiosity and a burning passion for Pokémon, Bonnie loves to take care of and play with Pokémon of all kinds. 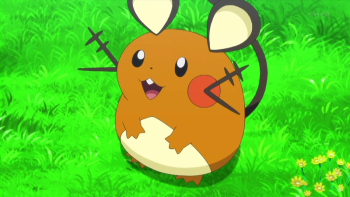 Dedenne first met the gang when he drops his food in front of them before getting stolen by a Fletching that Ash eventually captures. Dedenne was encountered again when he stole food from Bonnie. After a struggle with Team Rocket, he bonds with Pikachu and Bonnie. Bonnie wants Clemont to capture Dedenne for her which he agrees to. While Dedenne is technically owned by Clemont, he lets Bonnie take care of Dedenne since she's too young to be a trainer. 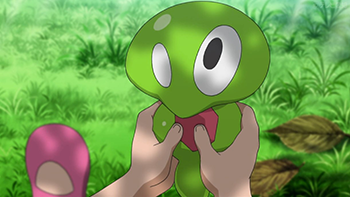 Voiced in Japanese by: Yūki Kaji
Voiced in English by: Billy Bob Thompson

A Zygarde Core that was being experimented on in Lysandre's secret laboratory, labeled by Team Flare as Z1. Thanks to Mairin's Chespin, it was able to escape, and ends up running into Ash's group. Bonnie gave it the nickname Squishy due to its, well, squishiness. It hides from Team Flare scientists who are tailing it. There is another Zygarde Core labeled as Z2, and the opening suggests the two will have a power struggle.

Serena
See here for more about Serena and her Pokémon. 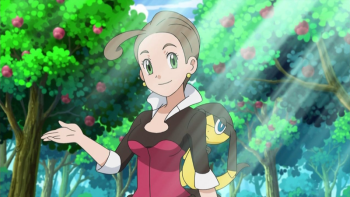 Voiced in Japanese by: Aya Endo
Voiced in English by: Jessica Paquet
Voiced in Latin American Spanish by: Nallely Solís 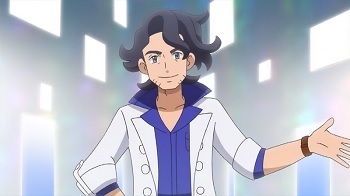 Voiced in Japanese by: Hiroshi Tsuchida
Voiced in English by: Jake Paque
Voiced in Latin American Spanish by: Manuel Campuzano

The Pokémon professor of the Kalos region. Sycamore's main field of research is on the newly discovered theory that certain Pokémon have an evolution beyond their final stage — Mega-Evolution as it is called. He gets to see firsthand that such evolutions exist when a Mega Blaziken assists Ash in recovering an out of control Garchomp from the Professor's lab. He is also in charge of running the Summer Camp that many young trainers attend. 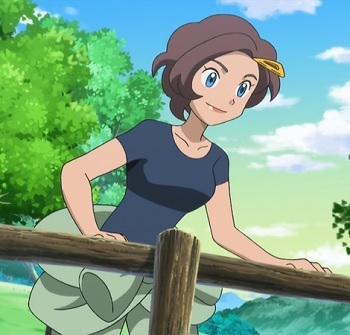 Voiced in Japanese by: Hitomi Nabatame
Voiced in English by: Erica Schroeder
Voiced in Latin American Spanish by: Alina Galindo

The mother of Serena. She used to compete in Rhyhorn races.

The father of Clemont and Bonnie. Also has a secret alter-ego in the form of Blaziken Mask. 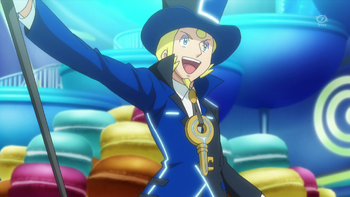 The host of various Pokémon Performances. 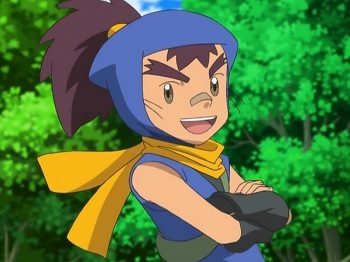 A young ninja who Ash and company run into along their journey a few times. His appearances have primarily been a means to help Ash train his Froakie. 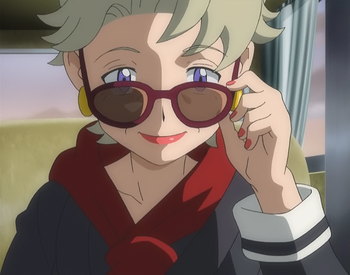 The former Kalos Queen who now works as a producer for Pokémon Showcases. She was Aria's mentor and she has taken interest in Serena since she witnessed the latter's Important Hair Cut. 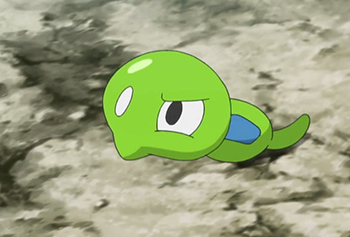 The other Zygarde Core. Rather than having a red core color, it instead has a blue one. It was being hunted down by Team Flare, but it managed to escape them multiple times due to its sheer strength with its 50% Forme. It remained in hiding until Z1/Squishy contacted it, alerting Team Flare of its location. It tried to fend off its chasers, but even with the help of Team Rocket, it still ended up being caught because of the arrival of Alain. It ended up being a captive of Lysandre and experimented on. 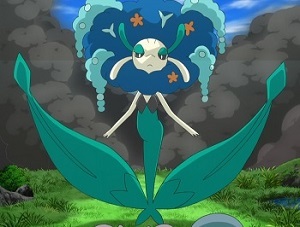 A war leader Florges that was responsible for Goomy meeting Ash, having previously taken over its homeland to preserve her infant Floette with its healing water. 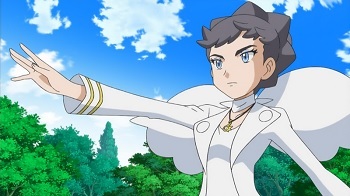 Voiced in Japanese by: Fumiko Orikasa
Voiced in English by: Vanessa Gardner
Voiced in Latin American Spanish by: Analiz Sánchez

The Kalos League Champion, and a famous movie star. 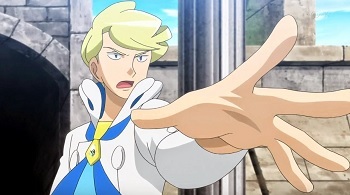 Voiced in Japanese by: Hiroyuki Yoshino
Voiced in English by: Eli James

One of the Elite Four members of Kalos who specializes in Water-types. He is introduced in the first Mega Evolution special. 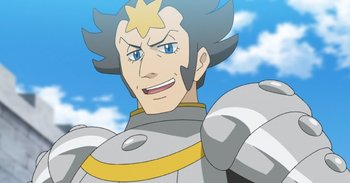 Voiced in Japanese by: Eiji Hanawa
Voiced in English by: Barrett Leddy

One of the Elite Four members of Kalos who specializes in Steel-types. He first had a cameo appearance in the 17th movie, Diancie and the Cocoon of Destruction. He would later make a full appearance in JN056 of Pokémon Journeys. 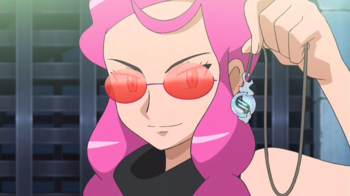 Voiced in Japanese by: Akeno Watanabe
Voiced in English by: Samara Naeymi
Voiced in Latin American Spanish by: Angélica Villa

One of the Elite Four members of Kalos who specializes in Fire-types. There's more to her than being just one of the Kalos League's top Pokémon trainers. 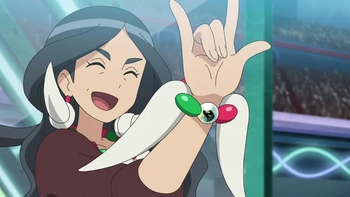 Voiced in Japanese by: Fumi Hirano
Voiced in English by: TBA

One of the Elite Four members of Kalos who specializes in Dragon-types. She was the only member of the Kalos Pokemon League to be completely absent during the XY Saga, but finally appears in-person during Journeys as one of Ash's last opponents in the Ultra Class, being ranked 12th in the World Coronation Series.