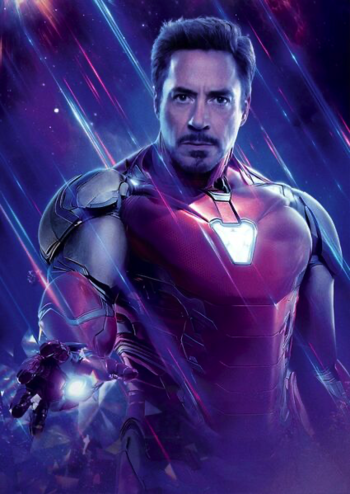 Advertisement:
"You want my property? You can't have it. But I did you a big favor: I have successfully privatized world peace."

Anthony Edward "Tony" Stark was born on May 29th, 1970 in Long Island, New York. He is an era-defining genius and the CEO of Stark Industries who uses his own self-designed Powered Armors. After being held hostage by terrorists and escaping only with the help of Ho Yinsen, his worldview and philosophy changes, leading to him shutting down the weapons manufacturing division of his company and becoming the superhero Iron Man.

Despite various interpersonal clashes, Tony finds himself called in to join the Avengers and proves a vital asset to them as The Team Benefactor, particularly during the conflict with Ultron. However, Tony's increasing desire to protect the world and his friends, culminating from the Survivor's Guilt accumulated through each successive film he's made an appearance in, inspires him to make some catastrophic decisions that begin to cause a rift between him and his friends — particularly Steve Rogers.

After the following Civil War that ensued, during which he recruited Peter Parker and brought him under his wing, Tony split from the Avengers until the arrival of Thanos caused him to reconcile with them. 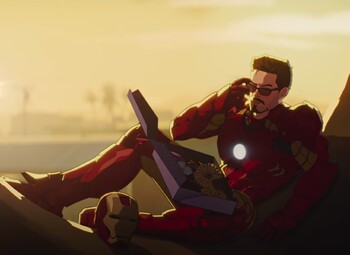 "I told you, I don't want to join your super-secret boy band."

On Earth-51825, Tony Stark never had the chance to join the Avengers, instead dying inside Randy's Donuts. 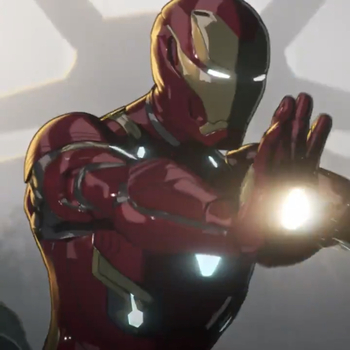 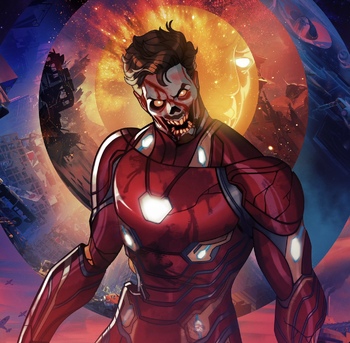 On Earth-89521, Iron Man became infected by a zombie virus.

The Tony Stark of Earth-32938, who never became Iron Man due to Killmonger saving him from being injured by his own IED in Afghanistan. 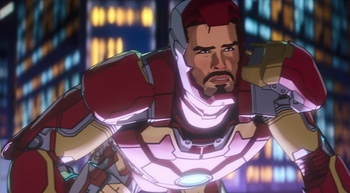 "You don't have to do this. I made you for peace."

On Earth-29929, Tony Stark is forced to watch as Ultron succeeds in his plan, dooming not only his world but also his entire universe. 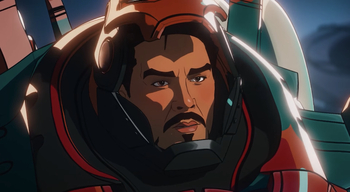 "And one who's about to kick your moon-shaped ugly mug."

A Variant of Iron Man who is friends with Gamora and helped her defeat Thanos.

On Earth-838 Tony Stark was able to build a suit of armor around the world with the creation of the Ultron Sentries, allowing the Avengers to disband to live their own lives. 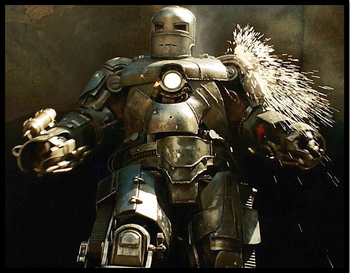 The first suit of armor Tony made, cobbled together from pieces of weapons and machines in a cave to help him escape. 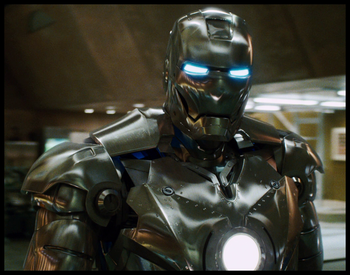 The first suit of armor built by Tony upon his return to America, this one was far more advanced and the first capable of flight (though not too impressive on the landing front). 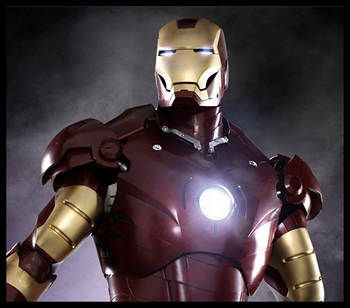 Perhaps the most iconic suit of armor developed by Tony Stark, the Mark 3 was constructed after working out some of the kinks of the Mark 2 and given a red and gold color scheme that would appear prominently in most armors from thereon. An armor built to replace the Mark 3 after it was heavily damaged during the fight against Iron Monger. 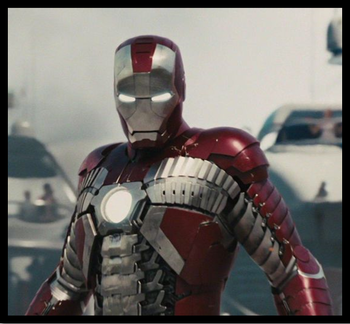 A suit specialized on portability and easy access, that can be collapsed and turned into a briefcase. 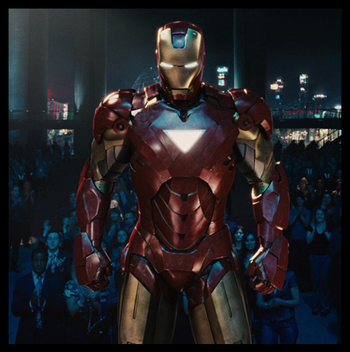 Appearances: Iron Man 2 | Captain America: The First Avengernote Archive footage from The Avengers in The Stinger | The Avengers (2012) | Iron Man 3

Tony Stark's first suit powered by the element he invented, no longer relying on Palladium cores to charge the suit's (and thus his pacemaker) arc reactor. 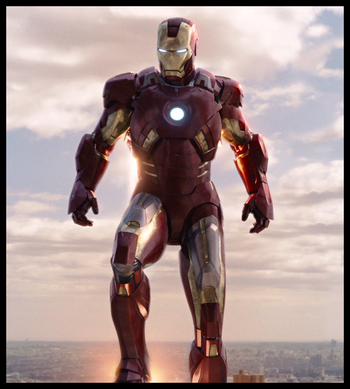 An armor that Tony configured to seek two wrist-mounted beacons and form around the wearer. The suit has the honor of being deployed during the Chitauri invasion of New York, as well as being the first to experience the vortex of space when Iron Man redirects a nuclear missile to the Chitauri mothership.

The origin of the technology that would later be used for the Mark 42 and "Veronica" Hulkbuster modular system. 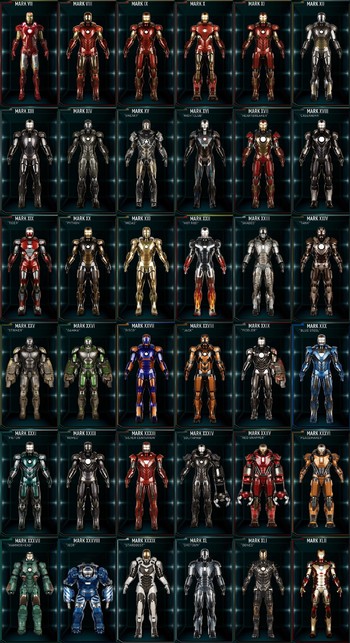 A group of thirty-three armors of various design and specialization, created during a period of rapid development after the Battle of New York. 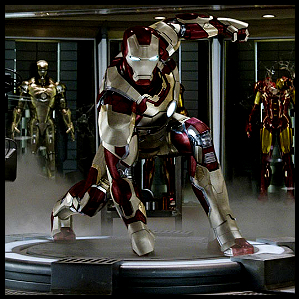 An armor used throughout Iron Man 3 by Tony. It can split itself apart and can be controlled from afar. Appearances: Avengers: Age of Ultron | What If...?

The first armor that Tony created after the others were destroyed by the "Clean Slate Protocol". 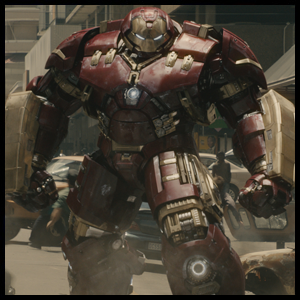 An armor developed by Tony Stark and Bruce Banner specifically to stop the Hulk should Banner ever lose control. More properly, "Veronica" isn't Powered Armor so much as a drone containing modular components that can assemble into a Mini-Mecha capable of matching the Hulk in strength. This modular nature also means that the Hulkbuster can easily call for replacements of damaged or destroyed pieces of itself, something vital in a protracted fight against the Hulk. Originally designated as Iron Man's Mark 44 armor, an updated Mark 48 version was created some time before the Battle of Wakanda. 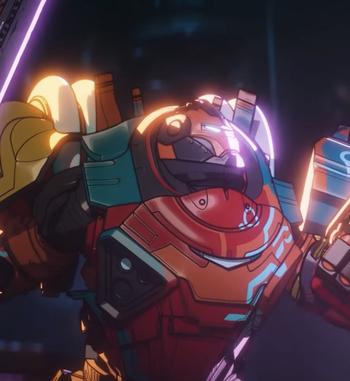 A version of the Hulkbuster Armor that a Variant of Tony Stark constructs on Sakaar. The armor used by Tony during the final battle of Avengers: Age of Ultron. The armor worn during the Avengers' Civil War. The armor worn during Vulture's attempted theft of the Avengers Tower cargo. An updated version of the Hulkbuster Armor used by Bruce Banner in the Battle of Wakanda and the Ambush on Thanos. 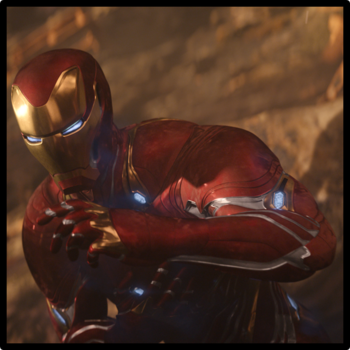 Tony's first suit that eschews the solid metal of his other armors in favor of being comprised entirely of nanobots. 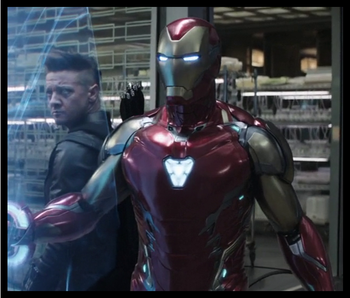 Appearances: Avengers: Endgame | What If...?

Built five years after the Snap. In many ways, it is pretty much identical to the Mark 50 in terms of technology, with some minor upgrades to its weaponry. This armor has the honor of being worn during the Battle of Earth and being the final armor built and worn by Tony Stark before his ultimate sacrifice.

Unless noted, much of the tropes regarding its abilities are the same as the Mark 50.

"What am I even tripping for? Everything's gonna work out exactly the way it's supposed to. I love you 3000."