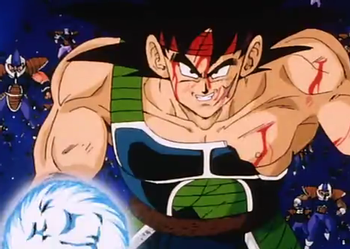 Goku and Raditz's father, and a Saiyan warrior (and part-time scientist) who wiped out various races under the orders of Freeza. Not a nice person, not a great parent, still tried to free his race from Freeza's tyranny, only to be killed with the rest of Planet Vegeta. 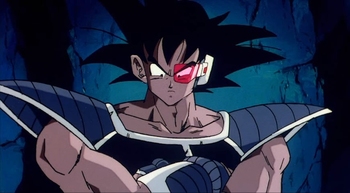 A Saiyan space pirate who resents the fact that Planet Vegeta never got to celebrate Christmas. He searches for a planet to suck the Christmas joy out of, and finds a suitable one in the form of Earth. 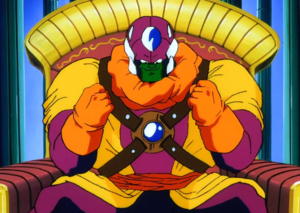 "If you're with the government or the church get the f**k off my property!"
Voiced by: Curtis "Takahata101" Arnott

The other half of an ancient Namekian who was exiled from Namek by the first half, Slug wished for youth on the Dragon Balls in order to conquer Earth. If this sounds familiar to you, don't bring it up to his face. 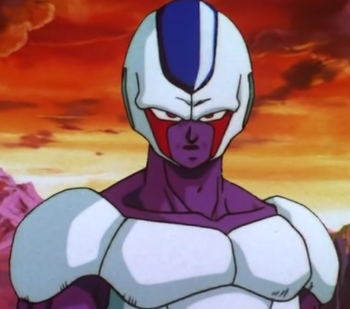 "I sure hope someone picks up the phone... because I (bleep)ing called it!"

The older brother of Freeza, Cooler lives with the knowledge that their father favors the former. In contrast to Freeza, Cooler is a strict, no nonsense kind of villain, and avoids many of the Stupid Evil pitfalls his brother falls into. 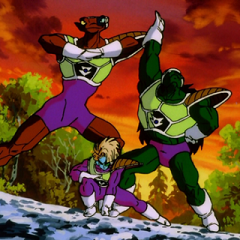 A little bird Goku brings back to life after Cooler kills him. 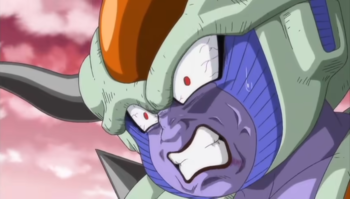 Freeza's ancestor, who attacked Planet Plant intending to make slaves out of the primitive Saiyans. 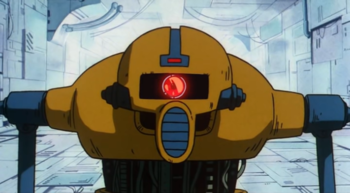 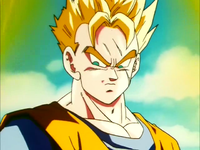 "I've got one, Mister Piccolo."
Voiced by: Zach Holzman

The Son Gohan from Future Trunks' timeline. With all his friends dead and not on speaking terms with his remaining family, Gohan has lost a fair bit of sanity. He only finds self worth in fighting the androids that destroyed human society and training Trunks to become a Super Saiyan. Eventually fell victim to Mentor Occupational Hazard, triggering Trunks' transformation. 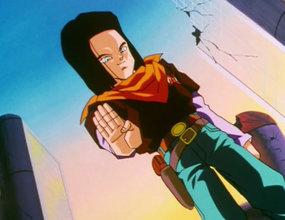 Okay, you know what? I'm killing every human. Every one. Then I'll range the shit out of that park.

Unlike the present timeline, Android 17 never met Android 16 and thus was never talked out of lording his new superpowers over the world. Beginning to wonder if there was something more for him out there than death and destruction. 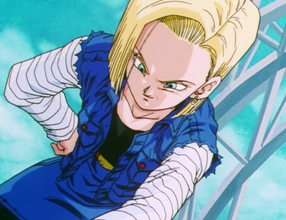 After you wipe an entire genre of music off the face of the Earth, what’s left?

Unlike the present timeline, Android 18 never met Android 16 and thus went along with Android 17's idea of fun, resulting in the near extinction of humanity. By now, she's lost any semblance of morality because of it. 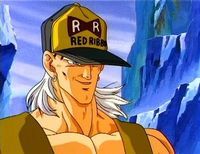 "Howdy there. I'm Android 13. Look at my trucker hat."
Voiced by: Rice Pirate

One of Doctor Gero's creations, Android 13 was shelved because the old Doctor couldn't stand his southern accent. Eventually, Gero ran out of options and tried fielding him and the other defective androids against Goku. He's the first of Gero's creations that can transform (the only other one being Cell), and he requires parts of Androids 14 and 15 to do it much like how Cell needs Androids 17 and 18 for his. 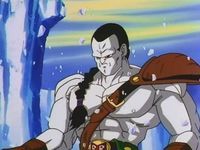 One of Doctor Gero's creations, Android 14 was shelved because his sound card was corrupted, rendering him unable to talk properly. Eventually, Gero ran out of options and tried fielding him and the other defective androids against Goku. Stoic and sophisticated, 14 doesn't say much and would rather get straight to the point.

"My data base says: Youz a bitch."
Voiced by: Anthony "Antfish" Sardinha

One of Doctor Gero's creations, Android 15 was shelved because he developed a drinking problem (somehow). Eventually, Gero ran out of options and tried fielding him and the other defective androids against Goku. Short, foulmouthed, and purple, Android 15 tends to be a frequent victim of profiling. 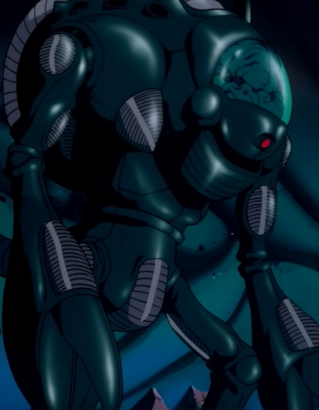 A well-known cancer researcher who ironically died of lung cancer. Though his body expired long ago, his assistant, Dr. Kochin, was kind enough to preserve his brain in a Exo-body... before accidentally abandoning him in their laboratory for fifty years. Though Wheelo is a good man, being stuck in a jar for decades has left him desperate to have a body again. He's not picky about the body itself, but the lengths Kochin goes to aquire one for him just plain horrify and disgust him. 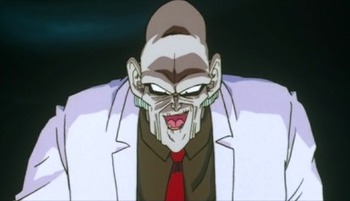 I TOLD you, you can't have a WOMAN'S body! They're not NEARLY strong enough! Also, she doesn't have a penis.
Voiced by: Joshua "Tomamoto" Tomar

Dr. Wheelo's assistant, a completely senile madman whose goal of restoring his friend's body has gone to truly mind-boggling levels of insanity. Unlike in canon, he's the true mastermind behind the events of the movie. 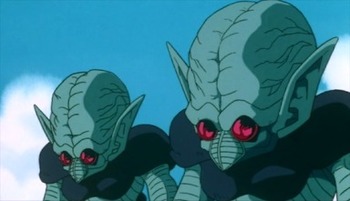 A race enslaved by Paragus. They actually enjoy their situation. 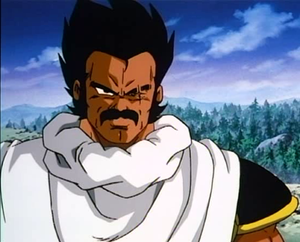 "Luckily, the king was as half-assed at murdering us as he was at raising you, Vegeta. And with Broly's magnificent power, we survived the extinction of our race."

A Saiyan who lived under the rule of King Vegeta, Paragus' son Broly was found to have a power level of 10,000 shortly after the boy's birth. Because Asskicking Equals Authority among Saiyans, King Vegeta feared Broly would overthrow him and attempted to kill the infant Broly despite the protests of Paragus, who tried to argue that a grown Broly would be able to save the Saiyans from Freeza's rule. Both Paragus and Broly were left to die, but when Freeza blew up planet Vegeta, Broly's power awoke and shielded them from death.

Now Paragus has appeared on Earth, claiming that he wants to make Vegeta the new Saiyan king, but in truth he has a secret plan for revenge against the royal bloodline. 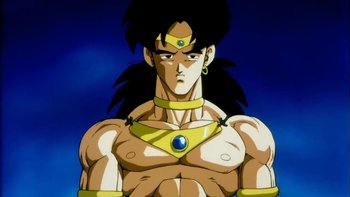 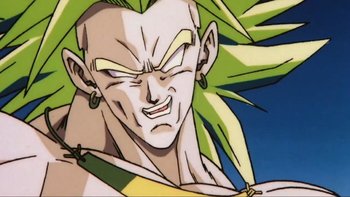 As a baby, Broly had a whopping power level of 10,000. Threatened by this, King Vegeta decided to off him before he could become a threat to his rule. Not only did Broly survive the assassination attempt, his power allowed him and his father Paragus to escape Planet Vegeta as it was being destroyed by Freeza. As he grew up, Broly achieved the Legendary Super Saiyan transformation naturally, and easily became the strongest being in the galaxy. Unfortunately, head trauma and psychological scars caused him to develop a blood thirsty split personality, triggered by memories of Goku's endless crying in the maternity ward.

Vegeta's brother, who was possibly killed off by his ass of a brother before Planet Vegeta's destruction. 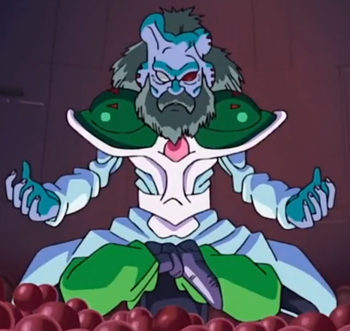 "Christmas is Ho-ho-ho-ver."
Click here to see his Christmas Eve-olution 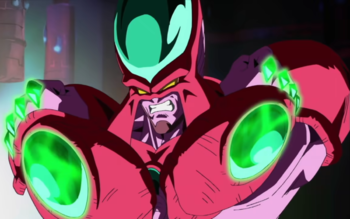 "You see Saiyans, you're not dealing with your average Father Christmas anymore!"

A mysterious alien who is sickened by what Earth has become, and as a result, attempts to end Christmas.