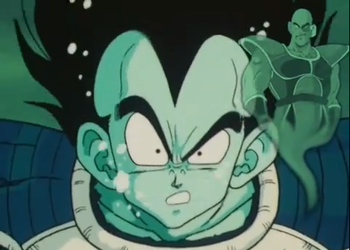 "First immortality... then the bitches."
Advertisement:

The Prince (technically King) of All Saiyans and one of the last members of his race, he initially comes to Earth to gain immortality from the Dragon Balls, only to be confronted by the Z Fighters. After a grueling battle with Goku, Vegeta continues to try and get stronger, hoping to be able to defeat his fellow Saiyan for humiliating him on Earth. However, though he might not be fond of the idea, Vegeta slowly becomes a close ally of the Z Fighters, even starting a family with Bulma, though currently he still remains an Anti-Villain.