Oolong is a shape shifting pig who had much more to do in the original Dragon Ball series than he does here. His status as someone who used to be more important is brought up from time to time.

Puar is a shape shifting cat who has lived with Yamcha for a long time. He virtually has no lines in DBZA.

The Ox-King is the father of Chi-Chi and grandfather to Gohan and Goten. His extreme wealth from his villainous days are drained by Goku since the latter never holds a real job.

The wish-granting Eternal Dragon that is summoned when the 7 Dragon Balls of Earth are brought together. He's tired of how the main cast are the only ones who ever seem to call him, which leads to him being incredibly snarky.

Gregory is a squeaky-voiced flying cricket who is one of the only three surface dwellers on King Kai's planet. His only role in the main series was to act as a trainer for Goku and his role is diminished greatly in DBZA. 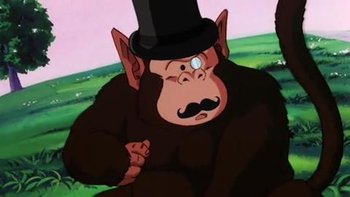 A monkey that lives with King Kai. He's incredibly eloquent, but nobody can understand him most of the time because he's an animal. He becomes Suddenly Voiced in the movies, however.

King Yemma serves as a bureaucratic minor deity that judges souls on their way to the afterlife. He knows that he is a minor player in everything that's going on but he will ham up his value wherever he can.

Korin inhabits a tower halfway up the pillar leading to Kame's Lookout. He doesn't have much of a purpose except to grow a senzu bean crop, provide exposition and eventually marry Yajirobe.

Elder Mouri is the elder of a village on Namek that protects one of its seven Dragon Balls. He becomes the leader of the Nameks once he and the rest of the Namekians eat Guru.

Porunga is the dragon summoned by the Namekian Dragon Balls. He doesn't have as sour of an outlook on life as the overworked Shenron does. 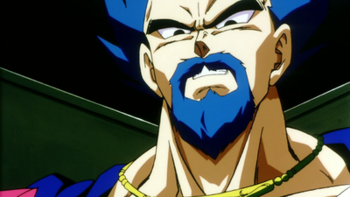 My son, the planet or me?
Voiced by: Scott "KaiserNeko" Frerichs

The father of Prince Vegeta and King of All Saiyans, Vegeta the First was long ago reduced to a mere puppet of Freeza's Empire. Despite this, he does his best to be a good ruler, often seeking advice from his trusted Grand Vizier... Nappa.

Orpheus is a Namekian crab who tries to inspire Vegeta to little avail.

Maron is a ditzy girl that Krillin picked up briefly after returning from Namek in the original series.

Turtle lives with Master Roshi at Kame House. Years of hanging out with the Turtle Hermit has caused him to roll with most of what life has to offer and he loves his pot brownies.

The Narrator comes out when some exposition is needed. Other than betting on fights that he knows the outcome of already he has no impact on the plot. 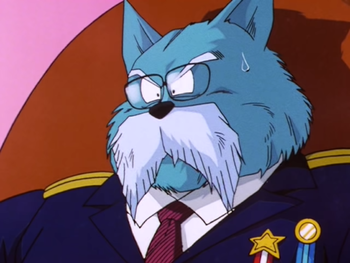 The King of Earth, he got that role via a wish to the Dragon Balls in times previous even to the original Dragon Ball series. In the Cell saga, he is among the helpless bystanders as the Cell Games unfold, first seen in Episode 55. Oh, by the way, he's a Dog; a blue Cairn terrier, to be exact. Progressive, huh? 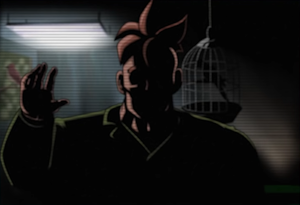 Love you! Good luck with your cyborgs...

Dr. Gero's son is a minor character who is given more importance in DBZA. He is enlisted with the Red Ribbon Army at a very unfortunate time...

Jimmy announces the action at the Cell Games and kisses butt to Mr. Satan professionally.

A couple of challengers in the Cell Games who have an unfortunately short life expectancy.

The ZTV cameraman covering the Cell Games along with Jimmy Firecracker. 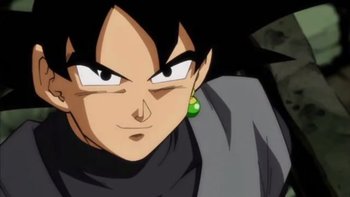 Because, Vegeta, a rose by any other name... is still Goku. 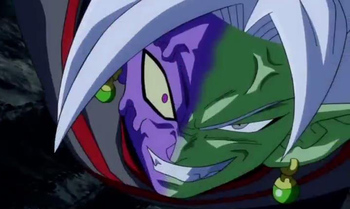 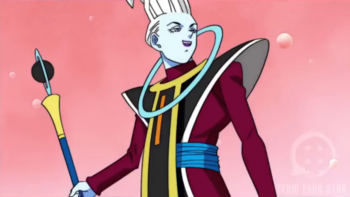 I've a preference for Hopdoddy's, personally. 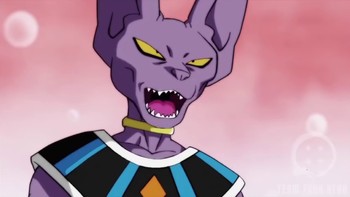 It's an abomination, and I now believe that Zamasu did nothing wrong!

Shared by all opponents of Cell during the Cell Games 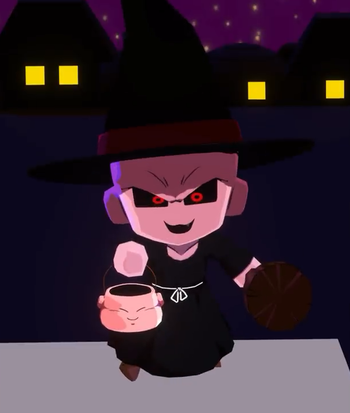