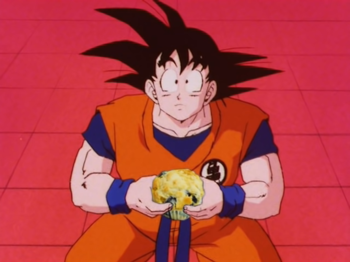 A monkey-tailed boy who spent his childhood on various hunts for the Dragon Balls, seven mystical orbs that summon a wish-granting dragon when gathered together, and participating in the Tenkaichi Budokai tournament. Now a grown man with a wife and child, Goku's world was turned upside-down when his brother Raditz showed up and revealed that the two of them are part of a critically endangered alien race known as the Saiyans, kickstarting Goku's next set of adventures. Unfortunately, despite meaning well, Goku isn't exactly the sharpest tool in the shed, and this combined with his instinctive love of fighting only end up making things worse for him and his peers.