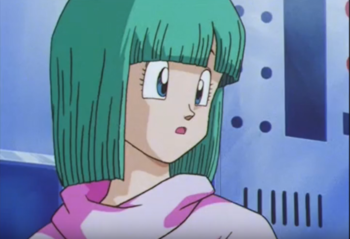 Bulma is Goku's oldest friend, having been the first human he ever met other than his grandpa, Son Gohan (not to be confused with his son). A genius inventor, she created the Dragon Radar that allows Goku and company to find the Dragon Balls at an increasingly efficient rate. Her brilliance is somewhat mitigated by her brash and oftentimes arrogant nature. Not really much of a fighter, she prefers to help her friends out from the sidelines. 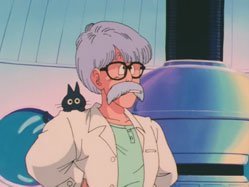 "Wives are for kissing, not talking."
Voiced by: Hbi2k

Bulma's father, the brilliant scientist who founded Capsule Corp. He also happens to be one of the most unbelievably racist and misogynistic people on earth. 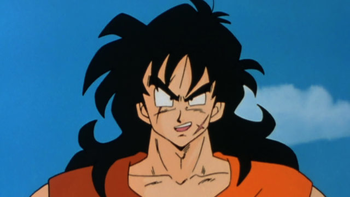 A former desert bandit who befriended Goku during the latter's childhood, the result of him trying and failing to steal the Dragon Balls. Yamcha's an experienced martial artist and a former student of Master Roshi, though his skills don't exactly shine in a world full of supermen. 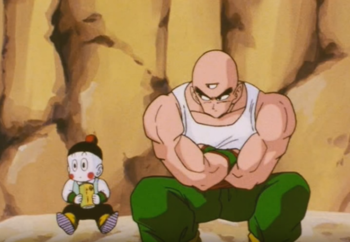 That's Tien on the right and Chiaotzu on the left. They're very close.
Tien voiced by: Ganxingba
Chiaotzu voiced by: Whiteash (Episode 6), Megami33 (Current)

A pair of martial artists who trained under Master Roshi's rival, the Crane Hermit; under his training, the duo's biggest specialty was the ability to levitate via ki manipulation, though this became irrelevant once the whole Z-Warrior gang learned to do it. After a Heel–Face Turn, the two have been close friends with the rest of the Z-Warriors, though it's pretty clear that they're far closer with each other. 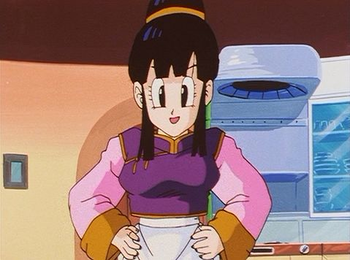 The daughter of the Ox King and Goku's wife (guess that makes Goku a prince?), who fell for and eventually married the spiky-haired airhead after he did a Crotch-Grab Sex Check on her. Don't think about it too hard. Despite being rather timid in her youth, as an adult Chi-Chi constantly hounds Goku and Gohan, and more often than not serves as the Z-Warriors' greatest force to reckon with. 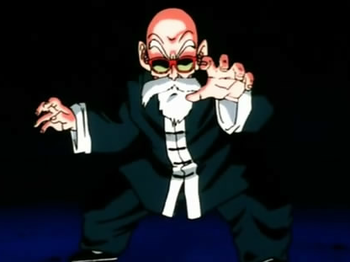 Formerly one of the strongest people in the world, who acted as Goku's mentor in his young age. Known for his perverted tendencies and his lazy attitude towards assisting in fights due to his old age, his house acts as a major base of operations for the Z-Fighters throughout the series. 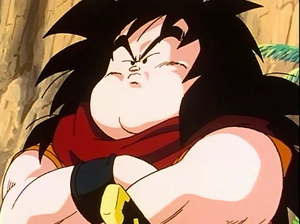 "Hey there, I thought I’d just drop in with these magical Senzu Beans that heal all wounds and restore your stamina."

Yajirobe is an overweight samurai with a sword that is still lethal to the super powered cast of DBZA. That said he mostly tends to the senzu bean crop on Korin's tower and eventually marries Korin. 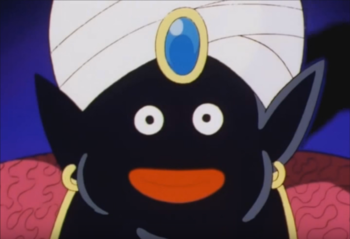 A jet-black genie-like creature who lives on the Lookout. Unlike his kindhearted counterpart who serves as a servant of Kami (and later Dende), this iteration of Mr. Popo is a sadistic, misanthropic druggie who holds top command of the Lookout and revels in messing with the Z-Warriors and getting high.

Has a Self Demonstrating page here that Needs Wiki Magic Love. 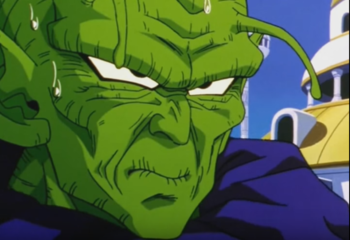 "I've been the guardian for over 300 years. I've seen wars, sickness, death, and worse, all the while trapped on this lookout, unable to interact with the outside world for more than moments at a time."
Voiced by: Vegeta3986 (Season 1), Remix of WeeklyTubeShow (Season 2-current)

Put simply, God. Or at least Earth's God; it's a kinda complicated matter. Having watched over humanity for ages, Kami is a wizened old Namekian who created the Dragon Balls long ago, a decision he regretted for quite some time. Kami in general is a very solemn/surly figure, this being the result of the life he led as God. He maintains a constant friendship with Mr. Popo, and has even smoked pot with the guy on occasion. 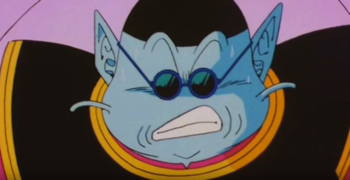 "I swear to God if this is George Takei again, I'm gonna shove a brick up the Verizon guy's ass."
Voiced by: KaiserNeko

One of the many gods in the Dragon Ball universe, King Kai lives life peacefully on a planet roughly the size of Master Roshi's island with his monkey Bubbles, his cricket Gregory, and the imprisoned pirate Bojack. King Kai served as a mentor to Goku, training the latter in preparation for the Saiyan invasion and keeping in touch with Goku during his trip to Namek. 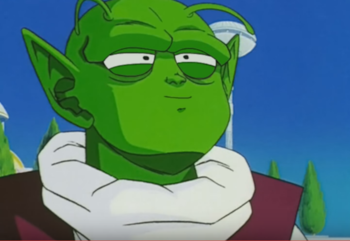 "That's right, I'm your White Mage. And nobody. F**cks. With the White Mage."
Voiced by: Takahata101

A young Namekian boy who was saved from Freeza's genocide by Gohan and Krillin. Having not exactly lived the most peaceful life due to the chaos Freeza and Vegeta caused, he spends the Namek Saga terrified, traumatized, and surrounded by various violent, (Vegeta) insane, (Guru, Freeza) or idiotic (Krillin) figures. The result is that by the end of the saga he is jaded and just barely tolerating everyone's shit, with the exception of Gohan, who he genuinely likes, respects, and eventually develops a crush on.

He's later kidnapped by Goku to remake the Dragon Balls when Kami's fusion with Piccolo renders them inert, at which point Dende becomes snarkier and more upfront about his irritation with nearly everyone around him. After becoming Earth's new God, he declares himself Super Kami Dende, taking a page from the late Namekian Grand Elder's book. 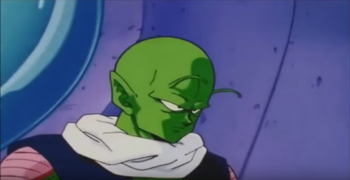 A Namekian who serves as the right-hand man of Super Kami Guru. Always forced to put up with Guru's eccentric nonsense, he often ranges from suffering in silence to snapping at others (Guru included) with a few snarks up his sleeve. During the Namek Saga, he fuses with Piccolo to give him a power boost, and has been living in his head ever since. 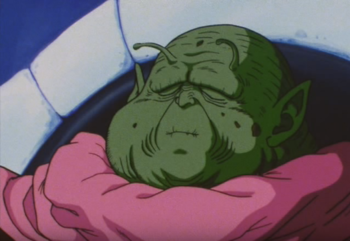 The Grand Elder of the planet Namek, and the creator of its own set of Dragon Balls. Unlike the benevolent grand elder seen in canon, this iteration of Guru is a Caligula of a ruler full of oddities and non-sequiturs. 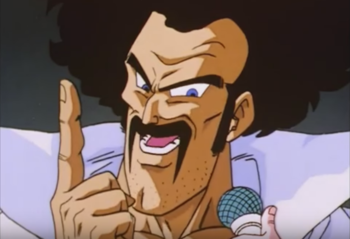 "Now you're thinkin' like a Satanist, Jimmy!"
Voiced by: Antfish

After Krillin and Yamcha missed a Tenkaichi Budōkai in favor of training to fight Dr. Gero's Androids, Mr. Mark Satan ended up becoming champion. A highly-popular celebrity with a noticeable ego, he volunteers to participate in the Cell Games on behalf of humankind. 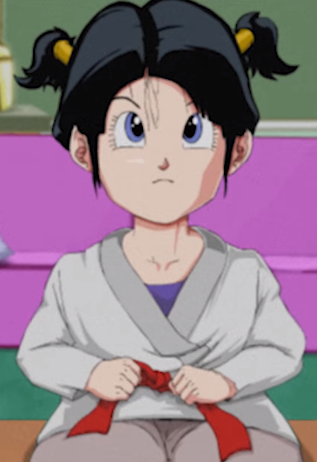 The daughter of Mr. Satan. First shows up as an Early-Bird Cameo in the Cell Saga. 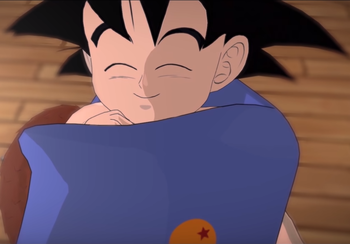 The second child of Goku and Chi-Chi, conceived in a marathon sex session during the prelude to the Cell Games. Chi-Chi insisted on having another baby in exchange for letting Goku and Gohan continue to train to fight Perfect Cell. Goten was born on Christmas Day, during Episode 2 of Dragon ShortZ.