The main characters of the three games in the Diablo series. The primary characters page for the series can be found here.

Be aware that there will be spoilers. Read ahead at your own risk.

Advertisement:
Tropes applying to all classes

A warrior who served in the Mad King Leoric's campaign against the neighboring nation of Westmarch, when this man returned from service he found his beloved homeland cursed and set out to vanquish the source of the impending demonic invasion. In the end the Warrior was able to defeat Diablo, but his fatal error was his decision to try and forever seal him away within his own body by plunging the soulstone into his head. His name is later revealed in Diablo III to be Aidan and is also revealed to have actually been King Leoric's eldest son.

A rogue captain from the Sisterhood of the Sightless Eye, she traveled from her people's ancestral home to aid Tristram against the invasion of Diablo and his minions. She returned home notably different from the experience and when Andariel invaded the rogues' monastery home, she was corrupted by the Maiden of Anguish.

Sorcerer (Jazreth, then the Summoner)

A powerful spellcaster, member of the most powerful of the eastern mage clans — the Vizjerei Clan. He traveled from his home of Lut Gholein to help vanquish Diablo and his hellborn minions, but his experiences drove him mad. When he returned home he delved in Things Man Was Not Meant to Know in the Arcane Sanctuary and Jumped Off The Slippery Slope.

Tropes applying to all classes 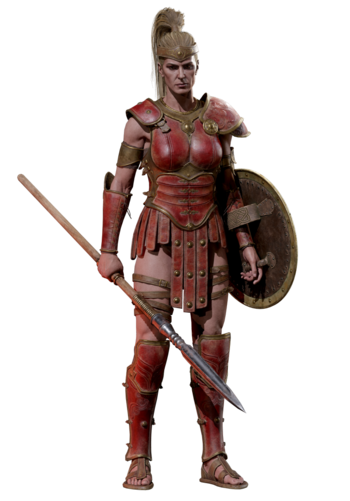 Introduced in Diablo II, it's a very versatile class that can play well in melee and ranged combat. May use bows and crossbows, Spears and Javelins to use her abilities better. May be able to summon a Valkyrie to help in battle. In story, the Amazon is a mercenary from a nomadic culture of warrior women from the south sea. Her Canon Name, according to Heroes of the Storm is Cassia.

A class introduced in the expansion. Can become one of the fastest characters but is not that bulky. Can play as a melee warrior with martial arts or ranged with elemental damage with her traps. In story she is from the Viz-Jaq'taar, also known as the Order of the Mage Slayers, an ancient order originally founded by the Vizjerei Clan to hunt down and eliminate rogue magi. 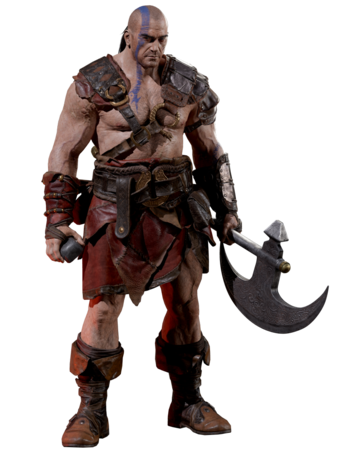 Introduced in Diablo II. A very bulky class designated to go melee in battle. Can use various weapons with efficiency, has a good list of battle skills and his Warcries have nice effects to him and companions. In story he is a warrior from the city of Harrogoth. 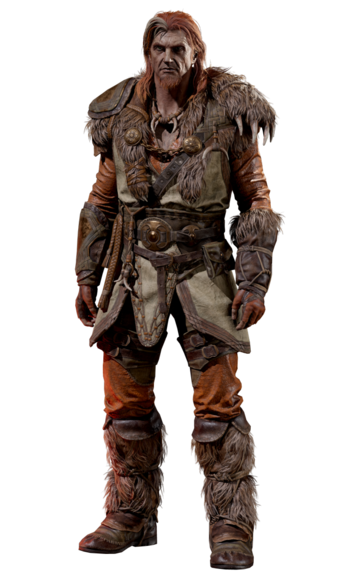 Introduced in Lord of Destruction. A warrior of nature who specializes in summoning animals and spirit pets, transforming and using fire and wind based attacks. In story he is a Warrior Poet from a tribe of forest-dwelling Barbarian exiles, practicing nature magic. 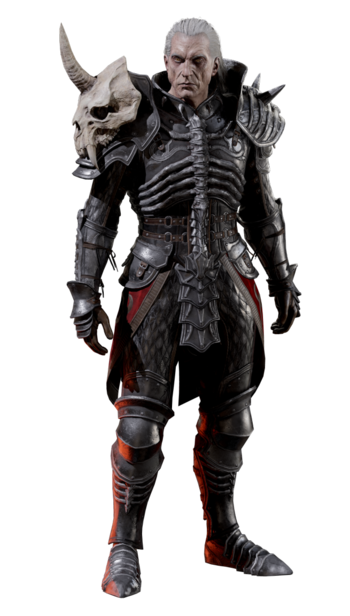 A user of the arts of the dead introduced in Diablo II, who has troubles if going to battle physically, but is a great caster, using bone and poisonous spells, summoning minions or cursing his enemies. In story he is a priest of the Cult of Rathma come out from the underground city of the eastern jungles to help restore balance between life and death. Heroes of the Storm gives him the Canon Name Xul. 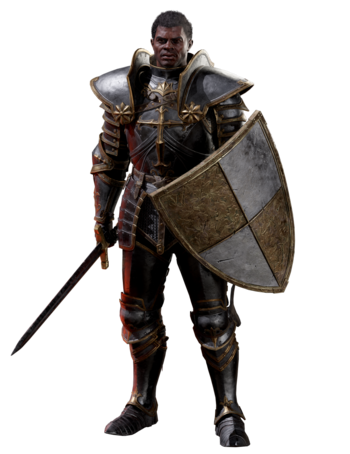 Voiced by: Larry B. Scott

A holy warrior introduced in Diablo II. Essentially a melee class with a few ranged spells and auras that give him and the party various bonuses, as well as debuffs to the enemies. In the story the Paladin is one of the mighty Knights of Westmarch who fought against and defeated the armies of King Leoric during his reign of madness. While the original Church of Zakarum has long since become corrupted, the Paladins long ago split with it in protest against its increasingly harsher methods in spreading the faith. Despite this, they still actively work to spread their brand of the faith of Zakarum. 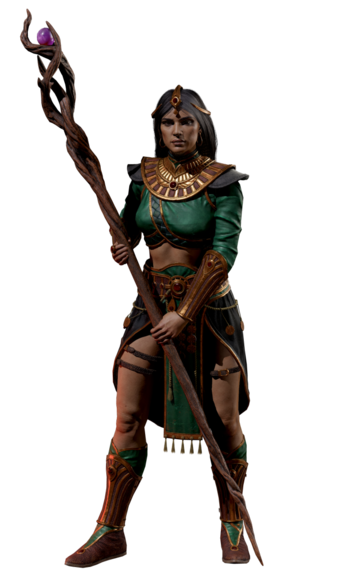 The basic caster class of Diablo II; she can choose from the Fire, Ice, Lightning trees to cast very variable spells. In story, she is a magi from the all female clan of Zann Esu, from which all members are hand picked from a young age to study magic to perfection. The canonical name of the sorceress who helped in defeating Diablo is Isendra. She is also the mentor of the Wizard from Diablo III. 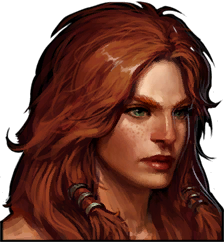 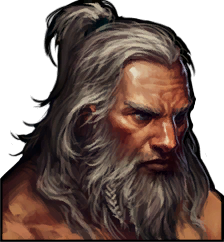 "I tire of the empty battles I once craved. I wander, outcast, while my tribe curses the gods who abandoned us."
Voiced by: Dorian Harewood (male), Athena Karkanis (female)

One of the two returning classes from Diablo II, Barbarians play similarly to their earlier counterpart. Earlier, Blizzard stated that the DIII barbarian was the same as the DII version, but this is no longer the case. The Barbarian uses Rage, which builds up when using certain abilities, but fades away when not in combat. The female Barbarian is given the name "Sonya" in Heroes of the Storm. 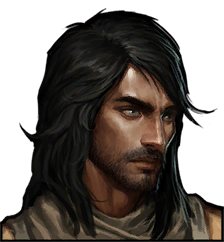 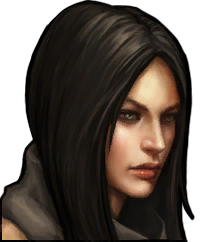 Vengeful harbingers of righteous doom who bring swift judgment and death to the hellish creatures daring enough to trespass on the mortal lands of Sanctuary. The Demon Hunter goes Guns Akimbo with crossbows, and uses a variety of traps and devices to keep enemies at bay. Their energy is divided into Hatred, which replenishes quickly and focuses on offense, and Discipline, which replenishes more slowly and keeps the Demon Hunter out of harm's way. In the tie-in story and Heroes of the Storm, the female Demon Hunter's name is Valla. 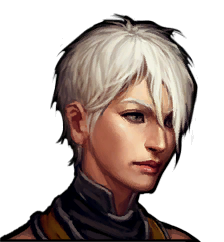 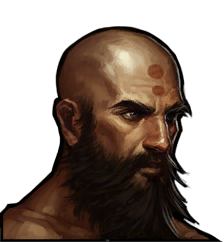 "I must carry out the will of the Patriarchs. When they need to see, I am their eyes. Where they wish to strike, I am their fist! Where they would ignite the light of truth, I am their torch!"
Voiced by: Jamieson Price (male), Rajia Baroudi (female)

Holy warriors from the Theocracy of Ivgorod who believe that the madness and chaos of Sanctuary are destined to be brought into order, and that it is their sacred mission to assist their thousand and one gods in doing so. Monks are physical attackers who are very good one to one but have difficulty with crowds. They use Spirit, which is built up through combos and specific moves, and can be used for devastating attacks. The male Monk is given the name Kharazim in Heroes of the Storm. 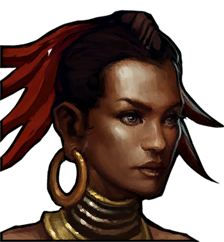 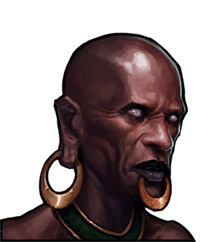 "[My people] say I defy the spirits. But I say no. I follow them."
Voiced by: Carl Lumbly (male), Erica Luttrell (female)

Sage conjurers, enchanters, and mystical warriors who are driven by a charge to maintain spiritual balance and harmony in the violent world of Sanctuary. They command ancient magics rooted in the primal powers of life and death, and are adept at summoning fearsome, shadowy creatures. They use Mana, which replenishes slowly and can be drained from enemies. Heroes of the Storm game the male Witch Doctor the name "Nazeebo". 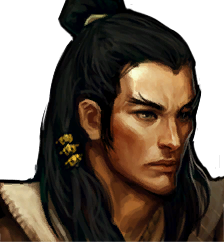 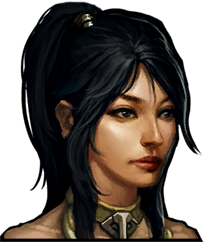 "Since my youth, I have been told that I was special. A prodigy of vast potential."
Voiced by: Crispin Freeman (male), Grey DeLisle (female)

Wizards are renegade spellcasters who use their bodies as vessels for arcane energy, forsaking the more careful path favored by other magic users. They manipulate all manner of forces to disintegrate, burn, and freeze their foes, and they can control time and light to teleport, create powerful illusions, and deflect oncoming attacks. They use Arcane Power, which regenerates quickly. However, their spells have cool-down times, due to the dangers of channeling too much energy. In the tie-in short story on the Diablo III website and Heroes of the Storm, the female Wizard's name is Li-Ming. 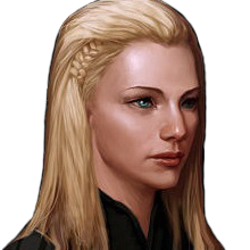 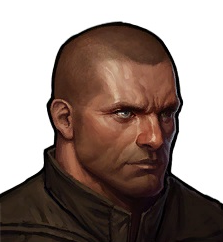 Introduced in Reaper of Souls, the Crusader is part of a special unit of the Paladins that long ago pushed eastwards on a secret mission to cleanse the faith of Zakarum from Mephisto's corruption. While Crusaders can use any one-handed or two-handed melee weapon, their special weapons are one-handed and two-handed flails, along with a special Crusader Shield for defensive skills — and with a special passive skill called Heavenly Strength, they can use a two-handed weapon AND a shield at once. The Crusader's abilities are powered by Wrath, which regenerates slowly but can be built up quickly through melee attacks. In game Heroes of the Storm the female Crusader is given name Johanna. 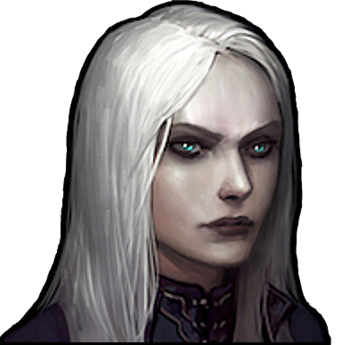 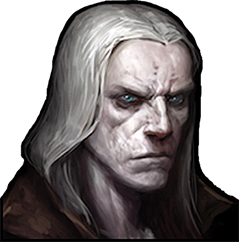 "All that grows must also wither and die. All dies and rots, and will then nourish the living. This is the Great Cycle of Being."
Voiced by: Ioan Gruffudd (male), Eliza Jane Schneider (female)

A character introduced in June 2017 in their own standalone "Rise of the Necromancer Pack," the Necromancer is a Priest of Rathma, like the Necromancer of Diablo II. As such, the Necromancer is dedicated to maintaining "Balance" in the cycle of life and death. Their unique weapon is the scythe, and their primary resource is Essence. Essence doesn't regenerate on its own, but it can be replenished by using certain skills in combat, and some of their skills use Life instead of Essence.

Tropes applying to all classes
Barbarian
The Barbarian has unparalleled strength and expertly wields an entire arsenal in battle, with a weapon for every occasion. He bellows intimidating war cries and unleashes ground-shaking slams to send approaching hordes reeling.
Druid
The Druid is a savage shapeshifter, fluidly transforming between the forms of a towering bear or a vicious werewolf to fight alongside the creatures of the wild. He also commands the power of earth, wind, and storm, unleashing nature’s wrath to devastating effect.
Necromancer
Necromancers are cunning summoners that conjure vengeful hordes of the undead. Their Essence flows into three powerful bastions of Bone, Blood, or Shadow to bring low their enemies.
Rogue
The Rogue is an adaptable, agile warrior who can specialize in ranged or close quarters combat. She can best any foe with her imbued weapons, perform powerful combo attacks, and can augment her arsenal with deadly poisons and shadow magic to slay demons with impunity.
Sorcerer/Sorceress
The Sorceress shapes the elements into whatever form is necessary to ensure victory, from hurling bolts of lightning, impaling her foes upon jagged spikes of ice, and raining flaming meteors down from the sky.