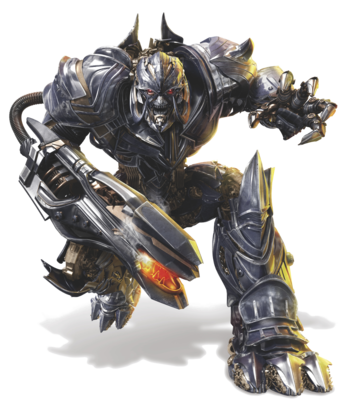 "You still fight for the weak! That is why you lose!"
Voiced by: Hugo Weaving (Transformers, Revenge Of The Fallen, Dark Of The Moon), Frank Welker (The Last Knight)
"I AM... MEGATRON."

Megatron is the leader of the Decepticons. Corrupted by the power of the AllSpark and the Fallen's influence, he wages war on Cybertron. He chased after the AllSpark after it was launched into space, but he crashed into the Arctic Circle and froze. What happens next is pretty coincidental.

He transforms into a spiky alien jet, and after his revival in the second film gains a tank form as well. By the third he has adopted an Earth alternate mode: a Mack tanker truck (still spiky). By the fifth, he's back to being a different, but still spiky, alien jet. 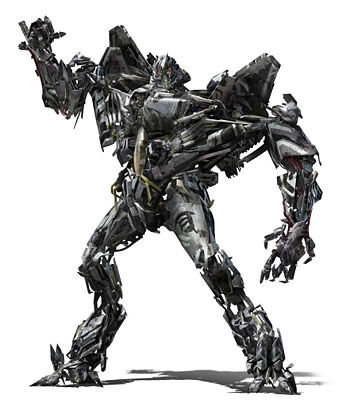 "Oh, my poor master! How it pains me to see you so wounded, so weak..."
Voiced by: Charlie Adler
Hologram pilot played by: Brian Reece
"Not to call you a coward, master, but sometimes, cowards do survive."

Megatron's second-in-command. Starscream led the Decepticons in his master's absence and didn't fare too badly at the job, maintaining the Decepticons' advantage over the Autobots for several eons. However, circumstances force Starscream to lead a team to Earth in search of the Allspark and the missing Megatron. Now Starscream looks for any opportunity to covertly undermine his master and one day take command of the Decepticons again for himself. He transforms into an F-22 Raptor, which is considered the most powerful fighter jet in the U.S. Air Force. 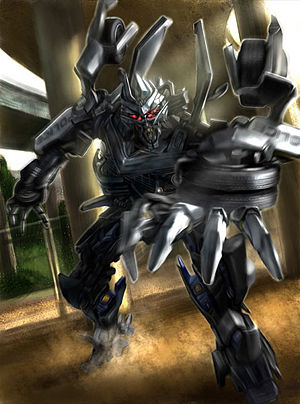 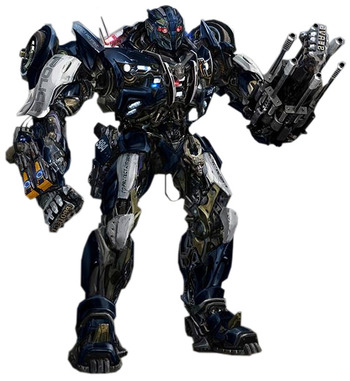 "Barricade enroute."
Voiced by: Jess Harnell (Transformers, The Last Knight), Frank Welker (Dark of the Moon)note A bizarre editing gaffe has Barricade clearly speak with Soundwave's voice
Hologram driver played by: Brian Reece
"Are you username ladiesman217? Where are the glasses?!"

An aggressive Rabid Cop who transforms into a police car. He and Frenzy hunt down Sam Witwicky to get information on the glasses, but he is defeated offscreen by Bumblebee, who gets established as his arch-enemy. Barricade's presence in the films goes "on and off" each movie. 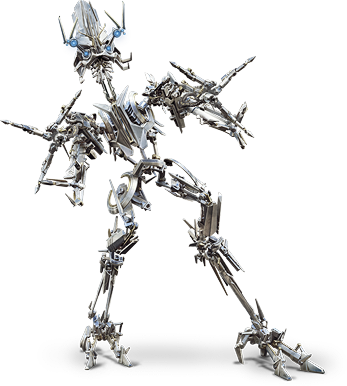 Barricade's partner, Frenzy serves as recon and sabotage. He speaks in garbled words and is Multi-Armed and Dangerous. He transforms into a CD player, which no one on Air Force One thinks is suspicious, and later on his head transforms into Mikaela's cell phone after being separated from the rest of him. 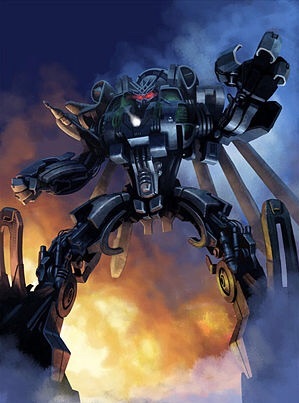 Megatron's Yes-Man, and the first Transformer seen on film. Blackout transforms into a military helicopter and obliterates an American air force base in Qatar, in a foiled attempt to obtain military documents relating to the locations of Megatron and the AllSpark. He is partnered with Scorponok. Blackout fights in the Mission City battle, but is killed via Groin Attack by Captain Lennox. 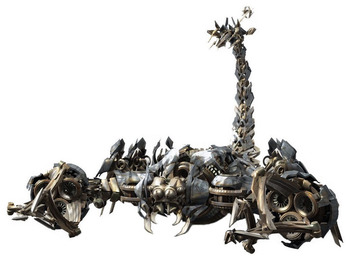 "My mother, she had the gift. You know, she saw things. Now I got the gene. That thing that attacked us, I got a feeling it ain't over."
—Figueroa

A Scary Scorpion who works as Blackout's partner, having a symbiotic relationship with him. He is deployed to chase Captain Lennox's team across Qatar, but retreats when attacked by US aircraft. He reappears in Revenge of the Fallen, but is curb-stomped by Jetfire. 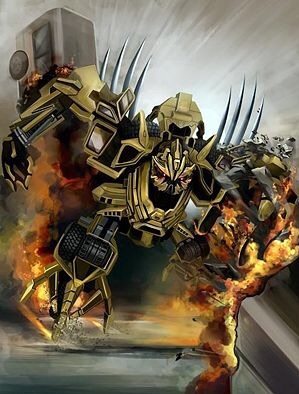 "I HATE YOU!!"
Voiced by: Jimmie Wood
"Bonecrusher rolling."

Bonecrusher transforms into a military Buffalo mine-clearing vehicle, which includes a back-mounted minesweeping claw. Bonecrusher uses it to flip cars out of his path on the freeway. 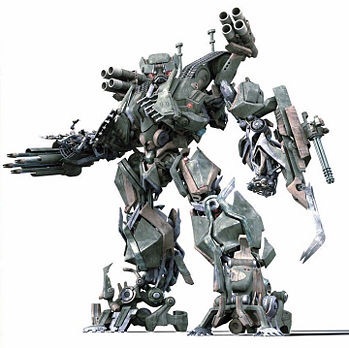 "See, me, I go by one guiding principle—keep it stupid... simple!"
"Devastator reporting."
—Brawl doesn't even know his real name!

A Decepticon built for war, Brawl transforms into a tank and is armed to the teeth with weapons. After suffering several Rasputinian Deaths, Brawl is taken down by Bumblebee.

Dispensor
A Decepticon that was made out of a Mountain Dew dispenser machine activated by Sam carrying the AllSpark.

Introduced in Transformers: Revenge of the Fallen (2009) 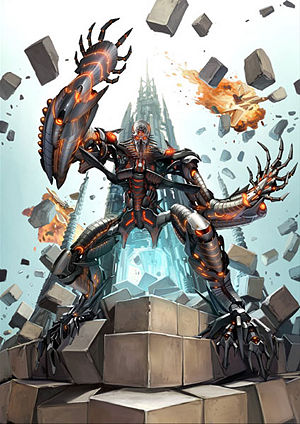 The Greater-Scope Villain to Megatron's Big Bad, The Fallen is the true founder of the Decepticons. Having Fantastic Racism against humanity, he tries to wipe them out by building a Sun Harvester machine on Earth, but is thwarted by his fellow Primes. Millenia later, he returns to exact his revenge. 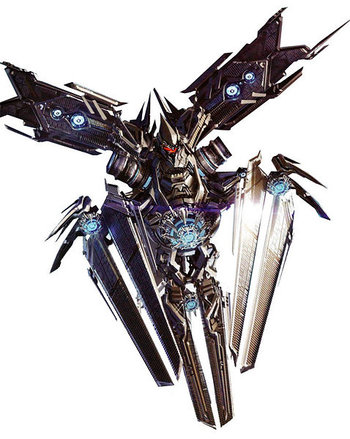 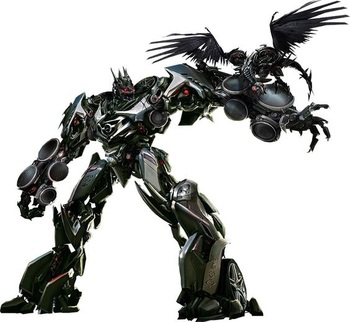 "No prisoners, only trophies."
Voiced by: Frank Welker
"Decepticons, mobilize. It is time."

Megatron's loyal Communications Officer. In Revenge of the Fallen, he remains in orbit as a satellite, hacking into US military communications and conveying intelligence gathered thereby to the other Decepticons, and deploying Ravage when he needs an agent of his own on the surface. In Dark of the Moon he has returned to Earth as Carly's Mercedes. 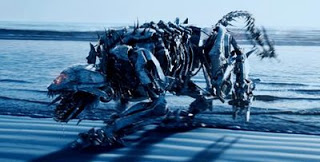 Tfwiki Profile Reedman is the form taken by a swarm of microcons when they combine together. The combined, mantis-like form is razor-thin, allowing for nigh-invisibility when seen from certain angles. 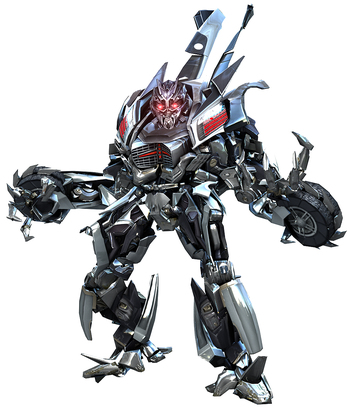 Voiced by: John DiMaggio (video game only)
"Just 'cause I'd always rather flee than fight, don't mean I can't!"

A relatively harmless Decepticon refugee who hides in Shanghai with Demolishor. He flees but is chased by the Twins, Arcee and co., and then Sideswipe who slices him in two. 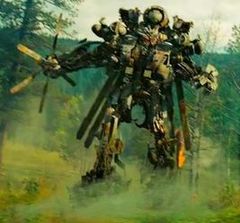 A Decepticon who looks a lot like Blackout. He captures Sam, Mikaela and Leo, delivering them to Megatron, Starscream and Scalpel to remove Sam's brain. He fights Optimus in battle, but gets cut down.

Demolishor
Voiced by: Calvin Wimmer
"The Fallen shall rise again!"

A giant Constructicon who hides out in Shanghai. A Psycho for Hire in the comics, Demolishor destroyed several Autobot colonies before coming to Earth. He flees from the Autobots on Earth until taken out by Optimus. 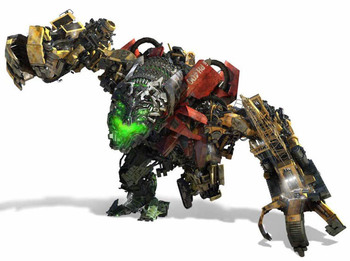 The mighty Devastator is the combined form of at least nine Constructicons.

As well as a few unnamed vehicles that are barely seen onscreen by themselves.

A tiny Decepticon field medic who transforms into an antique lensometer (a device for measuring spectacle prescriptions), Scalpel revives Megatron and attempts to remove Sam's brain to extract the knowledge implanted therein by the AllSpark shard. 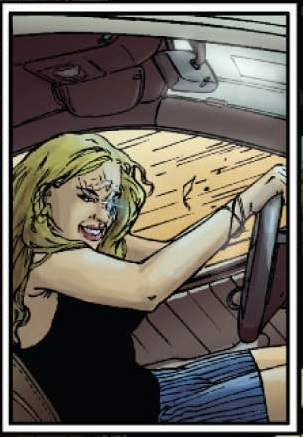 Played by: Isabel Lucas
"Is that your girlfriend?"

A Decepticon Pretender, "Alice" is responsible for trying to recover whatever remains of the Allspark. Unfortunately for him, what remains of the Allspark currently resides in a certain Witwicky's head, resulting in the spy infiltrating Sam's college as a co-ed who lives in his dorm. She tries to get his AllSpark knowledge via seduction and likely would have succeeded, but loses her patience and attacks, revealing her true form, when Mikaela interrupts.

Introduced in Transformers: Dark of the Moon (2011) 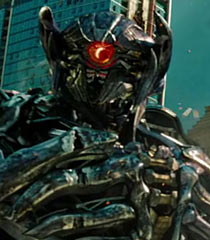 Much like Megatron crashed into the North Pole and was discovered and kept on ice by the USA, Shockwave arrived at Tunguska, Siberia in 1908 and wound up in the Soviets' hands. Now he's awake, and he's not very happy about being kept in stasis by these filthy organics. His most dangerous weapon is the Driller, a gargantuan, tentacled sandworm-like monster that does Shockwave's bidding.

Shockwave's warbeast/"pet", essentially a massive Mechanical Lifeform version of a Sand Worm. Drillers are Cybertron's apex predators. This absolutely humongous beast (in the novel, Optimus outright calls this particular specimen the largest Driller ever seen) was, at some point, tamed by Shockwave. It travelled to Earth with him, was entombed in cryo-stasis by the Russians with him, and woke up when he did. Large and strong enough to bring down a skyscraper (by tunneling into and up through it, finding a weak spot, wrapping around, and then making like a boa constrictor). Killed by Optimus Prime.

"With pleasure."
Voiced by: Keith Szarabajka
"Is your daddy home?"

Another of Soundwave's loyal minions. Laserbeak is capable of transforming into pretty much anything, and is Soundwave's personal agent in a massive conspiracy.

Three Decepticon assassins who all transform into FBI-esque black SUVs with cop lights. They attack Sam, Carly, Simmons, and Bumblebee on the highway on their way back to the NEST base.

Introduced in Transformers: Age of Extinction (2014) 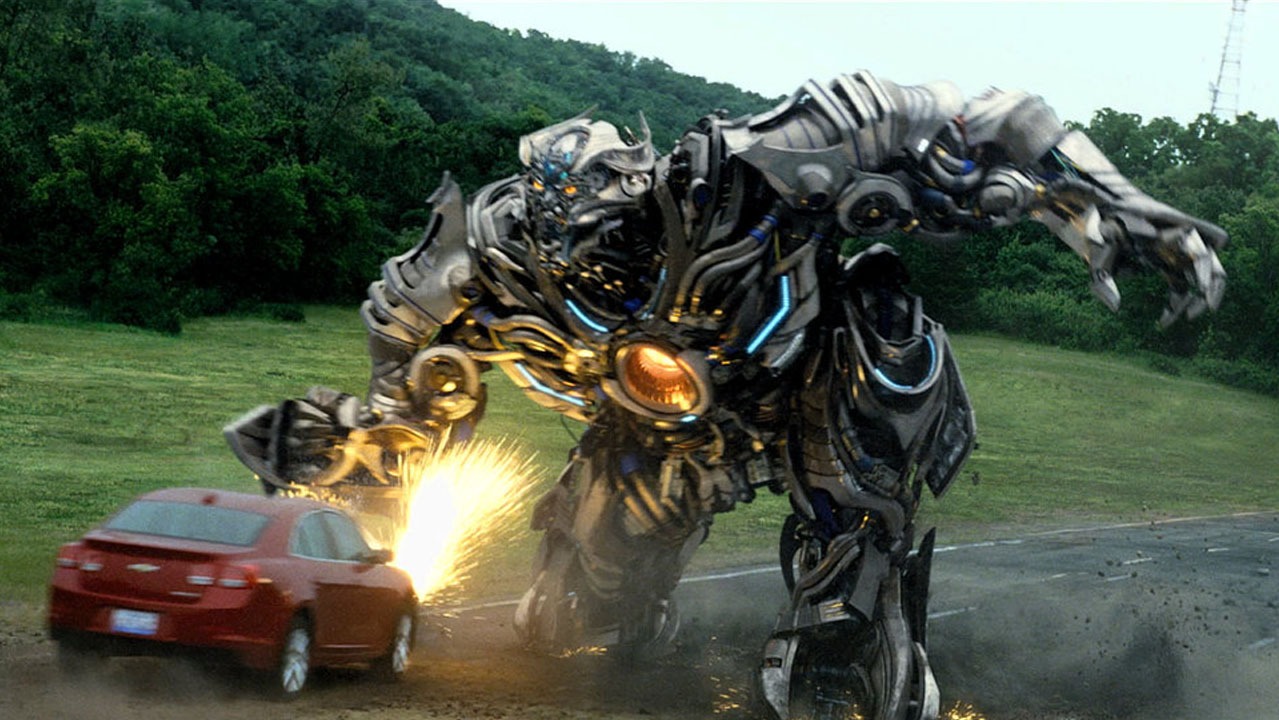 "That is why I have no fear!"
Voiced by: Frank Welker
"I AM GALVATRON!"

A man-made Transformer meant to be their remote-controlled drone replacement for Optimus Prime, he somehow ended up looking more like Prime's old nemesis Megatron. It turns out that this is because he is Megatron, having uploaded his consciousness into a man-made body. Like Optimus, he transforms into a cab-over semi truck. 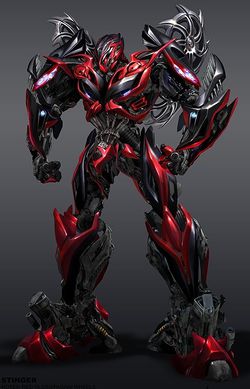 A man-made Transformer meant to be their remote-controlled drone replacement for Bumblebee.

Introduced in Transformers: The Last Knight (2017) 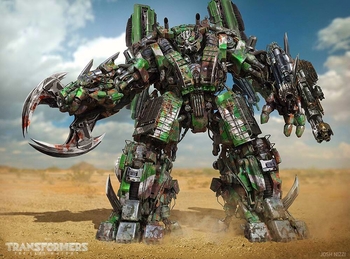 You need a bigger door!
Voiced by: John DiMaggio (unconfirmed)

A hulking Decepticon tactician who Megatron has freed to join his crew. 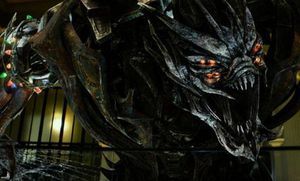 A rather unhinged Decepticon who Megatron has freed from prison. 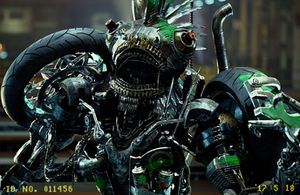 A small, impish Decepticon who was Megatron's first pick to be freed from TRF prison. 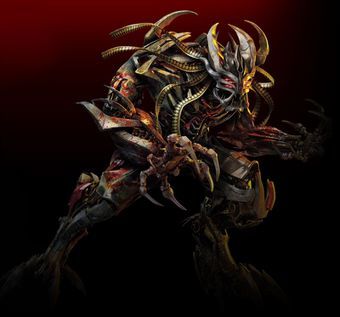 An extremely violent, bloodthirsty Decepticon who even gives Megatron pause. 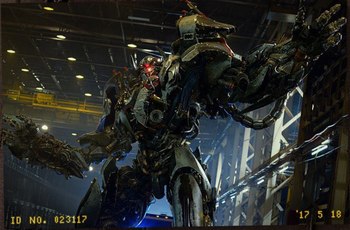 A loud, boisterous Decepticon who Megatron has freed from prison.