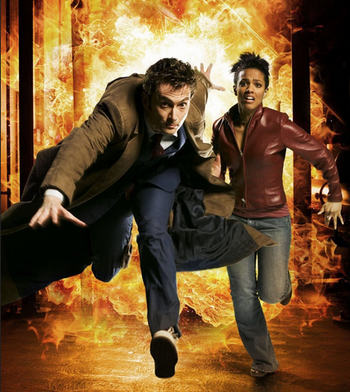 When I say "run", run... RUN!
"Calculon, a fight scene has broken out at the special effects warehouse! Come quickly before a fiery explosion chases someone down a hallway!"
— Monique, Futurama
Advertisement:

Examined exhaustively at the website The Reality of Running Away from Stuff.

If this is performed by jumping into a body of water, see Dive Under the Explosion. For when a character doesn't outrun the fireball and walks calmly out of and away from the fire anyway, see Out of the Inferno. See also Convection, Schmonvection. For when a character gets a head-start on the fireball, see Don't Ask, Just Run. In Real Life, the accepted reaction to an approaching fireball is to either jump down a deep hole and pull it in after you, or bend over and kiss your posterior goodbye. See also Bomb Disposal when this is done intentionally.