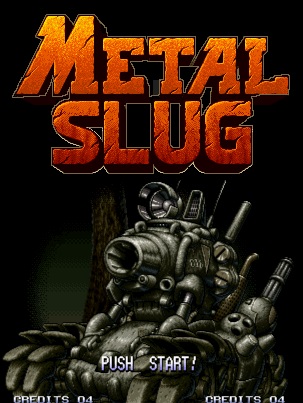 This slug leaves a trail of blood.
Mission One, Start!
Advertisement:

Metal Slug is a series of games from SNK.note The first game was actually created by Nazca Corporation, a company founded by former Irem employees after the closure of Irem's arcade division in 1994 and merged into SNK a few years later, losing the Nazca name in the process. Basically, it's a Run-and-Gun Shoot 'Em Up series. Shoot everything that takes damage, rescue prisoners, and collect power-ups from their underwear, attempt to stay alive.

The series' name refers to the incredibly cool, heavily armed one-seater tankette shown to your right. It can duck, it can jump, it's got two Vulcan miniguns... and the lowest-velocity high explosive cannon the world has ever seen. If you're truly desperate you can cause it to self-destruct, ejecting you into a somersault and rushing headlong into the enemy before blowing up.

The rather threadbare (at least in the games proper) stories usually involve the general Donald Morden, who is leading a rebel army to take control of the world. Over the course of the series, he makes deals with rebels, mad scientists, demons, and even aliens in his bid to change the world.

The series began with the Peregrine Falcon squad, Marco and Tarma, then added the Sparrows team, Eri and Fio, who together all form the core of the series. The fourth game relegated Tarma and Eri to the sidelines, while newcomers Trevor and Nadia took their places for a while. The sixth game notably added Ralf and Clark, the Ikari Warriors who have spent the last decade or so hanging out in The King of Fighters series. Their KoF teammate Leona Heidern is also available in Metal Slug XX as a downloadable character.

An interesting feature is semi-realistic personnel damage - one hit and you die - which applies to the characters and most of the mooks as well. If you're in a vehicle, you're in luck - you get three hit points, and once you lose them, you can still eject. Did we mention that very few enemies have touch-of-death? Well, it is so - if you want to kill someone you actually need to shoot or slice 'em with a melee weapon, and the same is true for them. Don't let this fool you though: the games are mercilessly hard, but in a way that makes you keep wanting to try again. Also, if a tank runs you over, though, it'll still kill you - unless you have a tank of your own.

Much of the game's appeal stems from its detailed, fluid graphics; it employs hand-drawn animation created by artists failing to understand the concepts of immovable chins or kneeless legs. Nuanced touches abound, such as multiple melée and idle animations for both enemies and the player characters. The artists also went to the trouble of making reloading animations which trigger after an appropriate number of bullets have been fired, even though you don't actually need to reload at any point. Even the enemy grunts are quite varied; they eat, talk amongst themselves, and occasionally run screaming in terror. Of course, they also have a nasty habit of jumping on your 'slug and humping the main cannon to stop you from firing. All in all, it is a great example of how to convey a huge amount of personality without any dialog or cutscenes.

There is also a free-to-play tower defense/base assault game that brings together all the mooks and characters from the universe together. Go here to read more.

A remake, produced by SNK with collaboration from China's Tencent Studios, titled Metal Slug Code J was released in May 2021.

Now with its own Character Sheet

''MISSION ALL OVER!''
Feedback