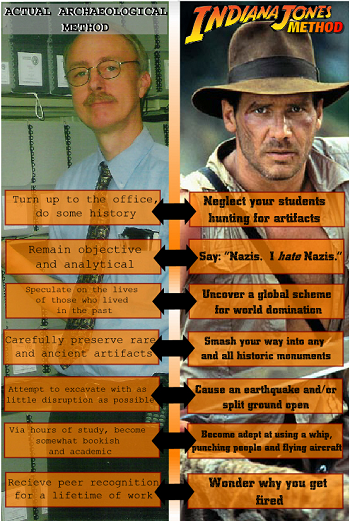 Yeah, but who would you rather be?
"You call this archaeology?!"
— Henry Jones Sr., Indiana Jones and the Last Crusade
Advertisement:

In Real Life, archaeology, or modern archaeology to be specific, is not the most fast-paced of careers. It can involve a lot of research, dirt, and theorizing about small details like diet. A real archaeologist can make their career by the meticulous analysis of the contents of an ancient garbage dump and indeed, they (well, a few) would prefer to find the dump rather than a king's tomb, since the dump can tell them far more about the way ordinary people lived, with far fewer legal and ethical ramifications. Additionally, a dump will have items of low or underestimated value, reducing the allure for tomb robbers who might otherwise have broken into tombs and ruined the information.

Not so in fiction. Since most of the world has the ruins of ancient and powerful civilizations littered under the surface, archaeology is a career that brings one constantly face to face with Temples of Doom, Lost Technology, imprisoned evils, and MacGuffins. Lots of MacGuffins. If the story takes place on Earth and the writers don't make up a culture wholesale, it'll usually involve something like an Egyptian tomb (expect a mummy to pursue the hero) or a Mayincatec temple.

Adventurer Archaeologists are capable of dressing up very well for more intellectual appearances, but forays into studying usually occur off-screen, and it's never implied to take very long. (Compare Badass Bookworm.) An Adventurer Archaeologist has an interesting morality. Ruins are rarely really "abandoned," as the descendants of the Precursors, or their ghosts, or even their mystically preserved selves are very upset when outsiders intrude, and especially when they take the focal points of their culture with them. It's not imperialism if the people who are guarding them aren't even human after all. Of course, real imperialists didn't believe the people around ancient sites were worth considering either. Most people call this "theft", few others would call this "imperialism". In Indiana Jones and the Temple of Doom, it's noted that the title character has been called a "grave robber" (although real archaeologists were once considered that and some still are). However, to an Adventurer Archaeologist, it's okay as long as it goes into a museum. To keep the audience rooting for the Adventurer Archaeologist, they are often pitted against an Evil Counterpart who wants the same treasure for themselves to hoard in a private collection, or to give it to the bad guys or sell to the highest bidder, use it to Take Over the World, etc. Thus, in fiction, it seems perfectly reasonable to use any means to acquire said MacGuffins, no matter how destructive. Who cares if you have to desecrate an ancient temple that could well be thousands of years old and is still frequented by its rightful people? There's a gold monkey at the end! And you get to wear a dashing Adventurer Outfit!

This trope is Older Than Radio, an accomplishment when considering that archaeology as a modern profession is less than two centuries old. Antiquarians, historians, and intellectual grave robbers were a staple of 19th Century gothic horror and ghost stories. They appeared regularly in pulp adventure novels and film adventures dating back to the dawn of talking pictures, including the Universal mummy movies and the Johnny Weismuller Tarzan films. A certain George Lucas and Steven Spielberg series made it big again in The '80s. Indeed, while real archaeology is nothing like the Indiana Jones movies, it's often said that most every western archaeologist since 1981 was inspired by him to become one. The conflation of actual archaeology with the exploits that we see in Indiana Jones has fortunately faded from the public consciousness in recent decades, but adventure and danger can still happen... it's just not inherently more likely to than any other endeavor that involves travel and field work.

It should be noted, however, that this Trope and its origins do come from Truth in err... Literature. Before archaeology evolved into a proper scientific discipline, many "archaeologists" tended to be more concerned about finding fortune, glory, and enticing-looking trinkets than actually discovering information about ancient cultures, or preserving knowledge for future research — let alone respecting or collaborating with the modern descendants of the people whose tombs and temples they excavated. As the Real Life examples below show, their methods were often unconsionable by modern standards, and they usually discarded artifacts that weren't glamorous or shiny, many of which would be considered quite scientifically or historically valuable today. Nobody will ever know how much historical evidence has been forever lost to us through the carelessness of 19th and early 20th century archaeologists. To be fair, Howard Carter's expedition to retrieve Tutankhamen's body and treasures was genuinely sensational. Finding the Terracotta Army of Qin Shi Huang

would have been a glorious experience as well. So while you'll likely never have a career as illustrious as Indy himself, you may just be lucky enough to hit the jackpot and discover something of historical, monetary, and popular value.

Additionally, "fighting bad guys over artifacts" in fiction also had a small kernel of truth. Around the time archaeology had finished coming into its own as a respectable field, the world was hit by one major conflict after another, each of which saw archaeology politicized and militarized to a dangerous degree. For reasons ranging from trying to dig up the remnants of heavily mythologized "advanced civilizations" for technological or ideological benefit or as a neat cover to do some spying, preservation and cataloging of the past often had to negotiate minefields of militarized looting, diplomatic relations, and warring superpowers and local factions.

By the time World War I began, most of the archaeologists in such endeavors — like Indiana Jones — tended to be formally trained professionals who tried to do their job properly and to keep military involvement with their work to a minimum. (For example, Ralph Bagnold was an archaeologist who signed up for the British military and used his experience and innovations to help form the Desert Rats.) But it wasn't uncommon for archaeological expeditions to be run like military expeditions, particularly during both world wars. On occasion, these forces and their affiliated armed forces and intelligence agencies even clashed like in any other battle, with people getting killed and some priceless finds being either damaged or destroyed — sometimes deliberately, just to deny them to the enemy. Small wonder that many archaeologists in real life learned to take up arms and get out of tight situations, and that those experiences have been distorted and blown out of proportion in the public imagination.

With respect to Values Dissonance, many of the Adventurer Archaeologist tropes are falling into Discredited Trope territory due to the historical tendency for these characters both in fiction and real life to be of White Anglo/European descent. Archaeologist adventurers are often depicted as Mighty Whitey types with a paternalistic attitude towards the Hollywood Natives when they're not running away from them. The artifacts that they collect often end up in museums that are outside of their native country, the rationale being that the natives cannot effectively protect them from theft or misuse. In keeping with an often racist narrative, there is also the annoying tendency for the White Archaeologist (due to being more book smart) to be implausibly more correct about the nature and origin of the artifact or ruins than his NativeGuide for whom these items are heritage.