The Emperor
aka: The Empress 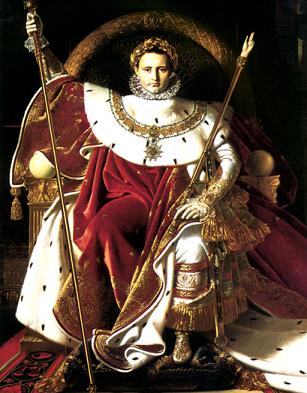 The ruler of an empire,note As in "a monarchy whose ruler is titled 'emperor' or 'empress'", not in the broader senses of "a political state of any government form that has an extensive territory under its centralized authority" or "a group of states or other territories that owe allegiance to a foreign power". usually but not always The Empire. Historically, Emperors outranked Kings, so when you need an authority figure to convey the highest possible power and rank, you can't get any higher than making them The Emperor (unless you go to The Pope, or into the otherworldly realms of Galactic Conquerors, Demon Lords and Archdevils, Celestial Paragons and Archangels, and at the most accepted highest tier, God-Emperor). The previous steps are God Save Us from the Queen!, The Woman Wearing the Queenly Mask, The High Queen, She Is the King, The Good King and President Evil.

If a ruler is known as The Emperor, it is almost a sure sign that he is an Evil Overlord and the Big Bad of the story, or at least a major villain, especially if you are in a Fantasy setting. Kings, Princes, and Presidents are as likely to be good (The Good King, The Wise Prince, President Superhero) as they are to be bad (The Caligula, The Evil Prince, President Evil) but somehow The Emperor is almost always a villain of some sort. This is probably for the same reasons as Good Republic, Evil Empire. Though, the Emperor is often distinct from the Evil Overlord in that he is much more likely to be the ruler of the world, or at least the ruler of the largest and most influential country in it, instead of simply being a Sauron/Kim Jong-Il dictator cackling it up over in Latveria/Mordorland. They will frequently invoke Authority Equals Asskicking, which can often make them the most dangerous man on the planet.

At the same time, Emperors have a tendency to be Disc One Final Bosses. It is very common for a villainous version to be hyped up as the main villain initially, before being superseded by a Greater-Scope Villain (perhaps a Sealed Evil in a Can that they released), The Man Behind the Man, or The Dragon after their defeat by the heroes and/or after betrayal from within their organization. When used like this, it is often for escalation purposes, as the initial Emperor is usually fairly normal within the setting besides his political power and (sometimes) exceptional skills, wheras their successor often has far more intimidating powers at their command.

This villainous depiction is ubiquitous in Western media. Only in historic plotlines involving the leaders of the real-life Roman Empire will they get any sympathetic depiction at all, and even then they are usually portrayed as incompetent or otherwise unflatteringly. In contrast, in China, Emperors actually served as legitimate rulers for most of recorded history, and thus Eastern media (particularly Chinese wuxia films, but also occasionally anime) do have the occasional non-evil Emperor. However, if the Emperor is legitimate and non-malevolent, his role in the plot is usually purely as a background character, often serving as an impotent foil to an Evil Chancellor who holds the true reins of power; plot-significant Emperors usually serve in the role of Big Bad.

This trope isn't necessarily related to God-Emperor, but it may be.

Not to Be Confused with the Black Metal band Emperor.

Of course, just because the trope is titled "The Emperor" doesn't preclude the existence of actual Empresses, as some of the examples in both fiction and Real Life illustrate. An Empress is likely to be depicted more sympathetically than an Emperor, often incorporating elements of The Woman Wearing the Queenly Mask (if mature) or the less-frivolous Princess Tropes (if youthful). Less sympathetic female rulers are more often queens. However, some older works do presuppose that the occupant of the throne is always an Emperor, never an Empress Regnant.

See also The High King, for a king with so much power and authority that other kings are subordinate to him.

Emperor of the Furon race, the one responsible for Crypto and Pox's mission on Earth.

Emperor of the Furon race, the one responsible for Crypto and Pox's mission on Earth.