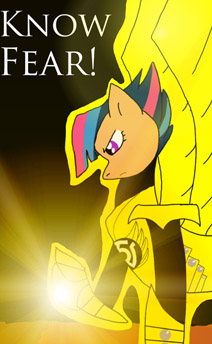 "Starburst of Equestria, you have the ability to instill great fear!"

is a crossover between My Little Pony: Friendship Is Magic and the Green Lantern series writtenby Michael_Ravencroft

(or Star for short), the daughter of Twilight Sparkle and Flash Sentry. Who has always wanted to be a Royal Guard. Training everyday, working hard to make her dream come true. But when war is threatened on Equestria, Starburst fights for the safety of her home and country. But soon, she will realize that her strength alone will not be enough. Poor Starburst is in need of power, the power to protect her family and friends, the power to defend her homeland, the power to instill fear in the hearts of her enemies!

Little did she know, that that very power would seek her out. But when she obtains it, how will it affect the rest of her life, her relationships with her parents, her little brother, and her friends? But more importantly, will she become the hero Equestria needs or become an even greater threat than anyone could've possibly imagined?

Complete with 17 Chapters, a sequel has already been announced under the name: MLP Next Generation: Love Conquers All! Avarice Takes It All!