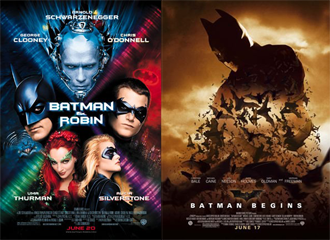 What camp killed, grit and depth revived.
"Hey, have you folks heard about this Hellboy character? It's okay if you haven't — there's a big #1 on the cover of this comic I just read, so I assume he's pretty new."
— Chris Sims

on Hellboy and the B.P.R.D.
Advertisement:

The writers of a particular work are about to start working on a continuation story, but they have an irreparable issue with the prior continuity.

Maybe Continuity Snarl has made writing an interesting plot increasingly difficult and tedious. Maybe the last episodes of the series made disliked decisions that changed the status quo and subsequent episodes would suffer from the changes made. Maybe the previous series ended and the writers want to start a new series that uses the same characters or takes the series in a different direction or style but don't want to override the ending of the old series. Maybe Continuity Lock-Out is preventing new fans from being attracted to the series. Or a well liked character was killed off and the writers want to use him or her again without making their death look cheap or if the character is a villain, without suffering Villain Decay.

The solution? Initiate a Continuity Reboot.

A Continuity Reboot is the partial or complete elimination of continuity from any and all previous works in a series. You could say it's the creation of an Alternate Universe that shares virtually little to no canon with the preceding works in a franchise. It's not a Reset Button or Snap Back: while those revert the continuity to a previous state, a Continuity Reboot starts over, providing the authors with a new clean slate to work on. In one form, as far as later works are concerned everything before it is in Canon Discontinuity (to which it sometimes overlaps).

Frequently, a Continuity Reboot will include one (or more) Tone Shifts, usually to whatever is considered the best money-maker for the target demographic, Darker and Edgier or Lighter and Softer.

A Continuity Reboot itself may be poorly received if handled poorly as it effectively negates any and all character development by a character to start anew and in extreme cases the rebooted character is effectively a completely different character under the same name. If the previous series has already ended and the Reboot is a revival of the franchise then it is more likely to be accepted by audience members.

A close relative of the regular Retcon and Cosmic Retcon and Retool. Overlaps with Fix Fic if the reboot's intent is to repair perceived problems with the original version.

Often called a "re-imagining" by squeamish writers not wanting to admit that they are throwing out previous continuity (though not always, see Alternate Continuity for exceptions), though this causes confusion as "re-imagining" is also used in the same context as "remake": ground-up retellings with no connection to past continuity (Planet of the Apes (2001), for example, which is credited with popularizing the term "re-imagining" in this context). For when the reboot is is caused by a specific, identifiable character, that character is a Continuity Rebooter. When it just happens to one person it is Ret-Gone.

It should be mentioned though, that reboots don't necessarily replace the originals, and they would may be created to entertain people by category, such as adults, teenagers, to children, while another reason a reboot could be made is that the original is bad, and should be remade to better quality, or just simply made as a different version to be made alongside the original.