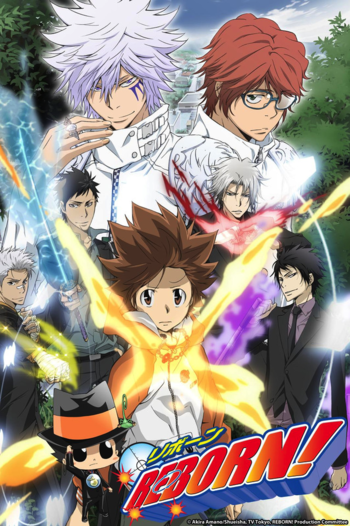 Tsunayoshi "Tsuna" Sawada is a loser; last in his class, inept at sports, and generally disliked by the populace of his school.

He's also next in line to become Boss of the Vongola crime family.

Tsuna doesn't believe it at first, but when his 'home tutor', a diminutive hitman named Reborn, arrives and shoots him (apparently) dead, he gains unstoppable determination and becomes able to do a host of amazing feats and command the respect of others... just the sort of thing he needs to turn his life around.

However, the life of a mafia boss is fraught with danger, and Tsuna and his new 'family' must become stronger if they are to survive the competition.

A popular Shonen Jump manga series by Akira Amano (known simply as Reborn! in the Viz translation) with an anime adaptation that ran from 2006 to 2010. The latter is available free and legally with English subtitles at Crunchyroll

, but only in certain areas. Discotek Media has also licensed the series in North America and, in September 2018, released the first 101 episodes on Blu-ray.

After eight years of serialization, the series came to an end in 2012 with a total of 409 chapters. Marvelous! announced that a stage play adaptation titled Katekyo Hitman Reborn! The STAGE was scheduled to be performed on September 21, 2018 to October 6, 2018, at Tokyo and Osaka, which covered the Daily Life and the Kokuyo arcs and saw to NEEKO reprising her role as Reborn. After a successful run, a second stage play titled Katekyo Hitman Reborn! the STAGE vs VARIA was announced for a two part run. The first Part ran June 14, 2019 to June 23, 2019.