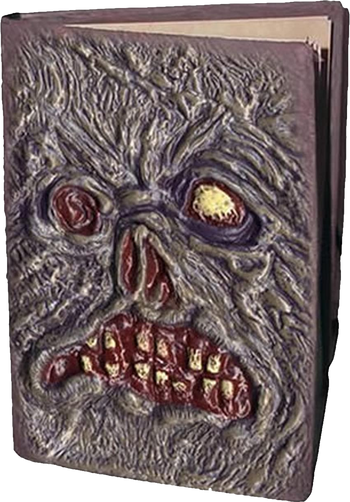 The Necronomicon Ex Mortis, the only book you can judge by its cover.
"A long time ago, when the world was so new nothing had a name, something woke up. It learned all about what was and what would be... but most of all it learned what couldn't be, what shouldn't be. And it gave those things names, names it wrote on indestructible pages, because a namer has mastery of the named."
— Diabolique, Darkhold: Pages from the Book of Sins #10
Advertisement:

The Evil Counterpart of the Great Big Book of Everything. An old leatherbound book with engravings depicting unpleasant creatures, prophecies of certain doom, and spells that do everything from turning toenails green to stopping (or causing) The End of the World as We Know It. Needless to say, You Do Not Want To Know where that leather and ink came from.

Villains collect these books for their step-by-step guides to bringing about their evil plans. When read by the hapless, they tend to summon The Legions of Hell into the mortal realm. When the books are read by the comic relief, Hilarity Ensues.

In Cosmic Horror Stories, they typically drive their readers into gibbering insanity; the title alone can make them hear voices. Reading from one carelessly can result in an Accidental Incantation.

Normally these books are centuries old, but one common subversion is for them to be modern paperbacks with almost-familiar names — e.g., The Idiot's Guide to Demonology, A Child's Garden of Gibbering Horrors, The Home Handyman's Guide to Building Gates to Hell, Chicken Soup for the Soulless.

See also Artifact of Doom, These Are Things Man Was Not Meant to Know, and Brown Note. Not to be confused with the Great Big Book of Everything or Spell Book, which are more of a neutral nature, or the Deadly Book, which is more actively harmful. May overlap with Tomes of Prophecy and Fate if they have evil prophecies. May serve in-setting as a Monster Compendium, especially in stories in the style of H. P. Lovecraft, in which the heroes sometimes have to familiarise themselves with horrible books, despite the danger to their sanity, in order to understand what they are fighting. Can involve The Fourth Wall Will Not Protect You.

The "Naturom Demonto," though it becomes the "Necronomicron ex Mortis" in the sequels (after Sam Raimi learned about H. P. Lovecraft and renamed the book as a Shout-Out). Usually shortened by characters to either "the Necronomicon" or "the Book of the Dead".

The "Naturom Demonto," though it becomes the "Necronomicron ex Mortis" in the sequels (after Sam Raimi learned about H. P. Lovecraft and renamed the book as a Shout-Out). Usually shortened by characters to either "the Necronomicon" or "the Book of the Dead".