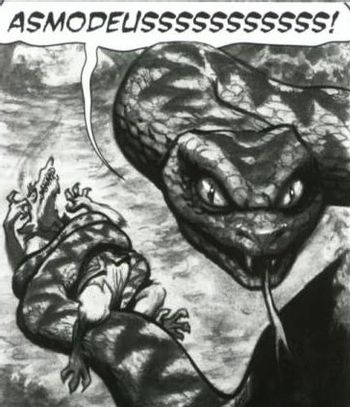 It's even worse when you're a snake's natural prey.
Advertisement:

Snakes are associated with evil.

We've seen lots of evil snakes. Now how many times have you seen a good snake in fiction? None? Very few? That's because of this trope. Aversions of this trope are rarer than aversions of Reptiles Are Abhorrent in general—heroic turtles and lizards are fairly common and good crocodilians, while rare, are not unheard of, but heroic snakes much less so.

So why do snakes in particular get such a bad rep? Well, out of all the different groups of reptiles, their lack of limbs make them the least anthropomorphic and thus harder to sympathize with, and a lot of them have venom, one of the nastiest methods to get yourself killed. In case of constrictors that lack venoms, they tend to be huge and have another nasty method to kill you: squeezing you to a slow, painful death before swallowing you whole.

People tend to fear snakes more than other crawling creatures. This is not an ordinary phobia, but an instinctive Primal Fear. Other mammals besides humans share it. Several hypotheses have been put fourth, with the most popular thus far being as a defense strategy against venomous snakes: animals that are hard to spot and whose warnings can easily be missed. Snakes in general also embody qualities that most social primates dislike, like unblinking eyes and "unnatural" legless movements. Do note that studies on monkeys show this phobia to be something of a learned behaviour

. Many mythologies also tend to associate snakes with water and darkness (not inaccurately due to many species being aquatic), so they are easy to symbolically digest as a "degenerate" form of life opposite to humanity.

Because of their primeval scariness, it does not take much imagination to portray these animals as monsters or harbingers of death in fiction.

Aside from literal serpents, this also works metaphorically. Thus, many of the examples below aren't really snakes but humans or other creatures that use snake symbolism as an evil motif. Smug Snake characters can play with this, even if they aren't literal snakes.

Sub-Trope of Reptiles Are Abhorrent. In antiquity, snakes are the inspiration for dragons and giant serpents, so they inform the oldest Dragon Tropes. Thanks to the serpent from Genesis, snakes are forever associated with Satan, the Satanic Archetype, Forbidden Fruit, and The Corrupter.

This sneaky python may seem nice, but has a lot of tricks up his ssssssleeve.

This sneaky python may seem nice, but has a lot of tricks up his ssssssleeve.