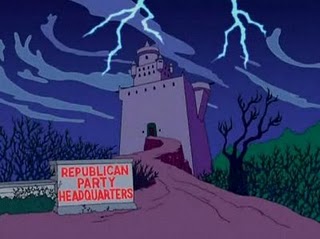 Members of the Springfield Republican Party include Dracula, Mr. Burns, a water-cooler, and an unfunny clown.
Stan Smith: Make your voice heard, even if it's a whining, sanctimonious liberal voice trying to get illegal immigrants free hair gel and heroin.
Brian Griffin: Or if you're a trigger-happy, conservative, weasel-faced hate spigot.
[Stan shoots Brian in the leg]
— 2012 "Rock the Vote" PSA
Advertisement:

A strawman can have pretty much any viewpoint. Why bother addressing the real issues of, for example, gun control, when you can instead portray all firearms advocates as bearded, racist, hillbilly lunatics ranting about black helicopters and wanting to own their own nuclear warheads? And so it goes with other examples; capitalists literally worship the bottom line and would sell their own kids into slavery if they could; liberals are all constantly outraged at secret Communists aiming to destroy morality and personal choice; conservatives are constantly outraged, intolerant bigots who want nothing more than to see oppressed minorities suffer; scientists look down their nose on the religious, then shake their fist at God while plotting to surpass Him; the religious are wide-eyed, superstitious madmen; feminists want to kill all men; and so on.

Men with Bowties on Abortion

Bojack Horseman depicts the Anti-Abortion team in a very unflattering manner, with their main speakers consisting of a group of old, white men with bowties, who are very stubborn in their beliefs despite never being able of being pregnant themselves.

Men with Bowties on Abortion

Bojack Horseman depicts the Anti-Abortion team in a very unflattering manner, with their main speakers consisting of a group of old, white men with bowties, who are very stubborn in their beliefs despite never being able of being pregnant themselves.