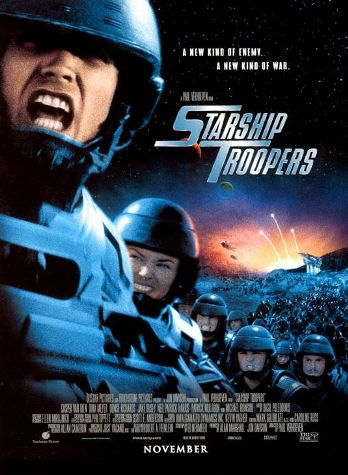 "The only good bug is a dead bug."
"Join the Mobile Infantry and save the galaxy."
"Service Guarantees Citizenship!"
"Would you like to know more?"
— Various buzz-words in Federation propaganda

Starship Troopers, the 1997 Paul Verhoeven film, is generally considered to be the biggest middle finger the novel will ever receive, and that is no accident. A co-production between TriStar Pictures and Touchstone Pictures (that's right, Disney helped produce this movie), it's a satire of militarism, the Cold War, dehumanization of the enemy, war movies, propaganda and military sci-fi in general. It originally started out as an unrelated script called Bug Hunt, before the studio acquired the rights to the novel and Verhoeven, disgusted by what little he was able to stomach of Heinlein's book, had the script rewritten to deepen the satire. The film was intentionally designed as the polar opposite of the book in terms of message, characterization, and themes — an attack on the idea that War Is Glorious. A fairly detailed exploration of the film's themes can be found on The AV Club.

The film was also riffed by RiffTrax. (It should be noted that some people missed the satire, perceiving a simple gung-ho action flick instead; to Verhoeven's credit, the film is his most action-packed.)

There were two Live-Action Direct to Video sequels, Starship Troopers 2: Hero of the Federation, which had Puppeteer Parasites in the form of brain-eating Control Bugs, and Starship Troopers 3: Marauder, with the introduction of Powered Armor and religious subtext.

In addition, an All-CGI Cartoon was released in 1999, called Roughnecks: Starship Troopers Chronicles, which takes place in its own continuity and incorporates the Powered Armor from the book. Years later came the CGI movie Starship Troopers: Invasion, made largely by fans of the book Running the Asylum. Invasion is set several years after the third movie. As such it does reference other movies, and acts as a Spiritual Adaptation of the book, in a colossal Tone Shift from the previous movies, with the end result been it feeling very similar to a certain other adaptation of the book with a helping of Fanservice and Technology Porn added in. Of note are its Japanese influences

, and the fact that Rico now looks like Big Boss IN SPACE! It was followed in 2017 by Starship Troopers: Traitor of Mars.

This film and its sequels provide examples of the following tropes:

You're Dead! Killed in Action!

After the failed landing at Klandathu, John Rico was listed among the over 300,000 casualties. Meanwhile the rest of the Roughnecks have a laugh about this with Rico as he is having his leg repaired in a healing tank.

Example of:
Reports of My Death Were Greatly Exaggerated

You're Dead! Killed in Action!

After the failed landing at Klandathu, John Rico was listed among the over 300,000 casualties. Meanwhile the rest of the Roughnecks have a laugh about this with Rico as he is having his leg repaired in a healing tank.