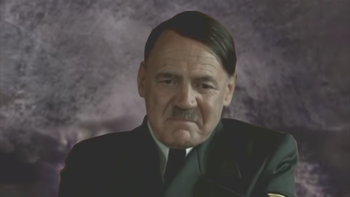 Portrayed by: Bruno Ganz
"Of course, it all makes sense... this dimension was crafted from her emotions. She's the second owner of this place..."

The dictator of Nazi Germany. Due to Dmitri Frollo and Stalin at large, he is forced to hide in the bunker. Whenever the Irate Gamer or Best Hercules isn't around, he's usually subject to abuse. 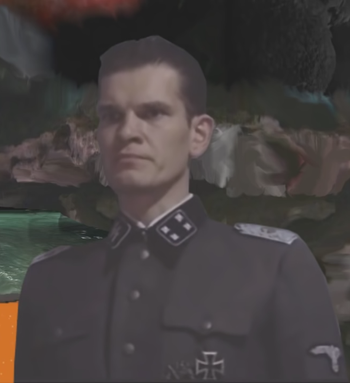 Portrayed by: Gotz Otto
"It's about time I show you my powers."

A tall SS officer and Hitler's personal adjutant. He often informs or asks Hitler about various matters, but he has some hidden powers underneath his calm exterior. 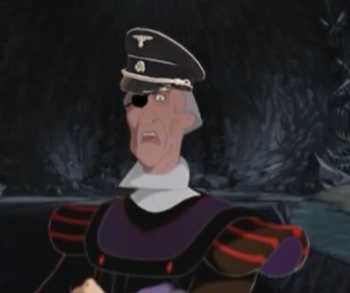 Dubbed by: Klausjürgen Wussow
"The jailers here are stupid... Being a Nazi doesn't necessarily make you evil..."

Frollo's German cousin and a Nazi scientist. He is loyal to the Frollo family code, refusing to harm anyone in his family.

A Wehrmacht general with a strange obsession of pointing at maps.

A Wehrmacht general known for his shiny bald head.

A Wehrmacht general known for his alcoholism.

A band of Middle Eastern Terrorists. Led by Achmed Frollo, they vow to wreak vengeance upon the United States for destroying their lives.
Achmed Frollo 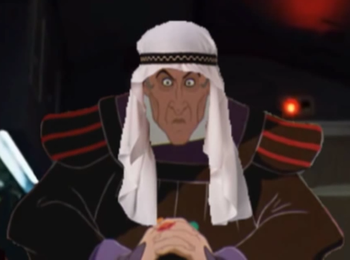 The Arabian cousin to Frollo, he originally lived a peaceful life until a US air strike destroyed his home and everything he had. To get his revenge on the Americans, he got with Gwonam, Jafar, and Yusuf to create a group called the Arabian Bros. 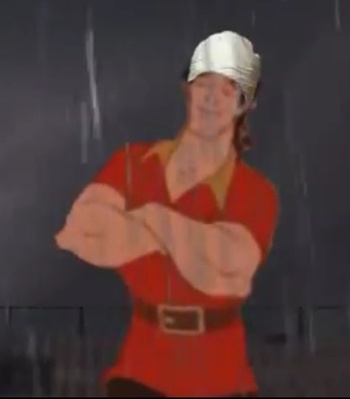 Dubbed by: Reda Al Wakil
"No one transforms into a giant snake like Yusuf!"

Gaston's Arabian cousin, who is just as arrogant as him. 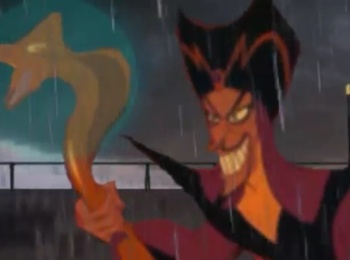 An Arabian sorcerer who acts as the brawn of the Arabian Bros, preferring to goof off instead of actually performing his duties. 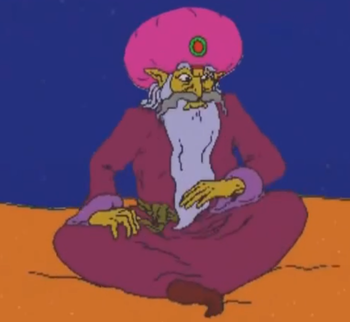 Voiced by: Paul Wann
"The birds are dying! Isn't it beautiful?"

A Koridian sorcerer who declared revenge on the Americans for killing his wife and destroying everything he had, forging an alliance with the Arabian Bros. 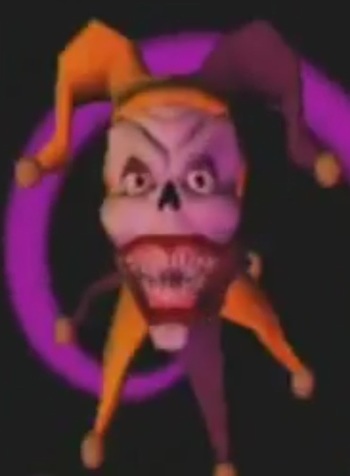 Voiced by: Jack E. Haegar
"The freak show! See the strange and bizarre!"

A floating jester skull who aids the Arabian Bros in CarnEvil.

The one-scene wonder from The Room, he's a goon hired by the Arabian Bros to get their ransom.

Los no Frollos (translated "The no-Frollos") is an organization formed by Marco Antonio Regil after his first defeat by Frollo and Gaston. Its members consist of the denizens of Hell, who had a smaller but similar alliance, the Arabian Bros, the Fatally Fabulously Fegelein Find and Fuck-up Fellowship, and other villains. They are invited by convincing the existing members, getting recommended by others, or just tagging along.
Dmitri Frollo 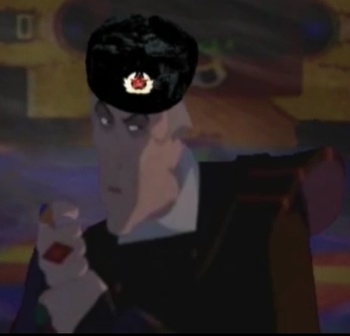 Dubbed by: Igor Balalaev
"The Russians kill Hitler once again!"

Frollo's Russian cousin, desiring to conquer France for the former Soviet Union and his bro Stalin. 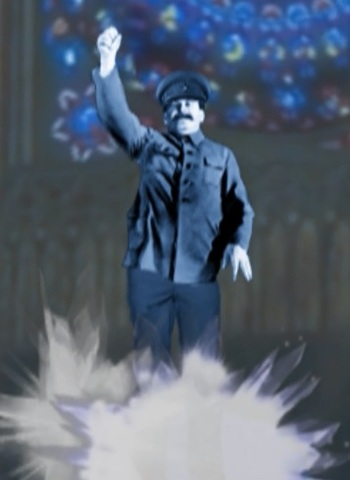 "With Hitler gone, France is ours! All French people must do labor!"

The dictator of the Soviet Union and Arch-Enemy to Hitler. Dmitri Frollo resurrects him between the events of "Frollo Reads Mein Kampf" and "Frollo Gets AIDS", and together, they desire to conquer France. 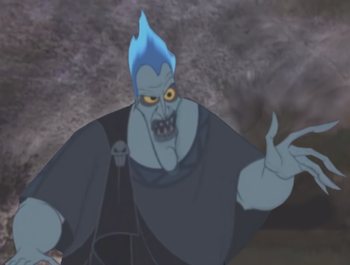 Voiced by: James Woods
"He's a legendary power-broker and manipulator in perhaps his final bid for immortality. A man with the means, the motives, and the opportunities to play you and the rest of us as pawns..."

The god of the Underworld with a fiery temper and low patience. He likes to spew out corny jokes and punchlines. 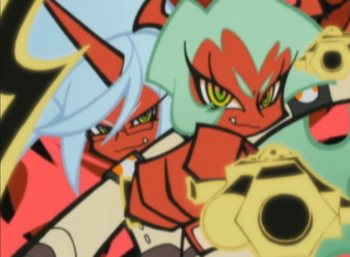 Hades' servants, they are very noble in the RRRRURUS and will follow anything he says. Scanty wields revolvers, while Kneesocks uses scythes. 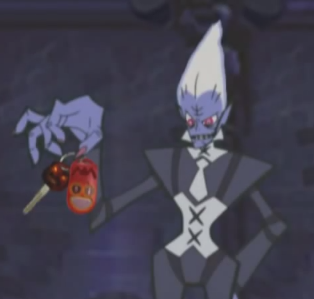 Voiced by: Shigeru Chiba
"C'mon... hit me again! Pomf me like you did earlier!"

The mayor of Daten City, he acts as the behind-the-scenes in Hell. 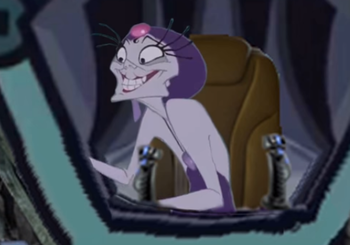 Voiced by: Eartha Kitt
"The next sound you'll hear is an automatic pattern cutter with teeth of steel!"

A mad scientist from Inca hired by the Arabian Bros to aid them in their schemes. She is skilled at making potions and giant robots. 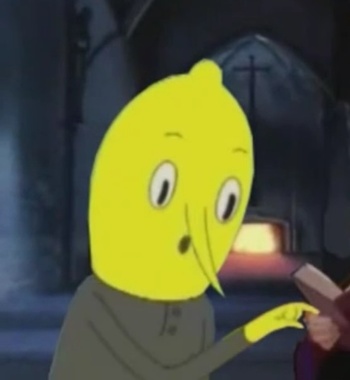 Voiced by: Justin Roiland
"Oh man... I'm looking around this place and starting to feel some anxiety about this whole thing..."

A humanoid lemon drop with a very loud high-pitched voice. 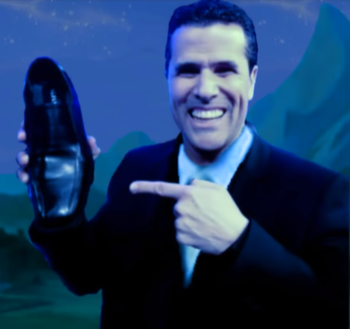 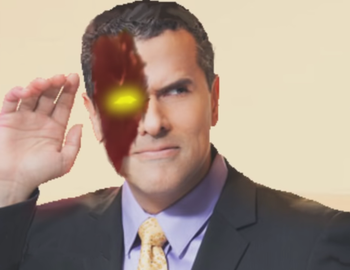 A Mexican game show host with a special psychokinesis power, the Scoreboard Aura. He has low patience and takes great pride in his penis, claiming that it is the sexiest "in all the Mexican Republic, and in the US and Puerto Rico as well". After his first defeat by Frollo and Gaston, he founded the organization called Los no Frollos. 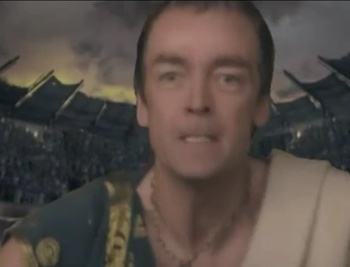 Portrayed by: John Hannah
"Once again the gods spread cheeks to ram cock in fucking ass..."

A very loud and foul-mouthed lanista hailing from ancient Rome. 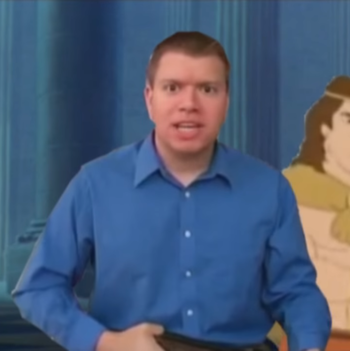 Portrayed by: Chris Bores
"Your ass is grass now, buddy!"

An online video game reviewer whose web-show Frollo dislikes. Goofs around by doing things such as making jokes, making him the laughing stock of the villains in the show. 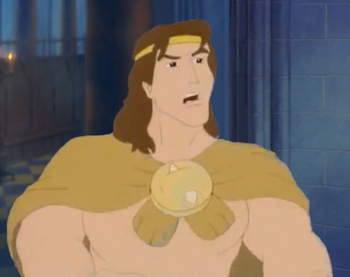 There would be a description here, but it... really doesn't have the time right now. This version of Hercules comes from a So Bad, It's Good animated Hercules film. He is best friends with the Irate Gamer and portrayed as the laughing stock of the villains in the show. 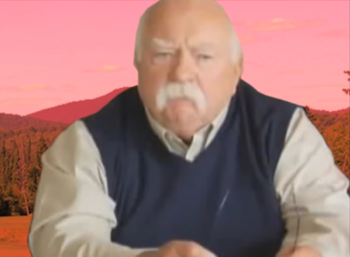 "The people out here looking at me... glad to see you. Ladies and gentlemen... I'm perfect!"

A famous American actor who is diagnosed with "diabeetus", which apparently is the source of his powers. He tries to take over the show while Frollo and Gaston are "dead", but he is later taken down after the two come back to life.

Later, he joins Los no Frollos on their crusade against Frollo, but it seems that he's only joining them to fuel his own agenda.

Wilford's Creations
A list of creatures that were created by Wilford Brimley after his deityhood. They consist of: 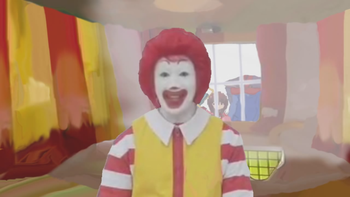 The mascot of McDonald's who antagonizes Frollo for his own evil purposes. Although he looks silly due to his appearance, there is more to him than meets the eye. 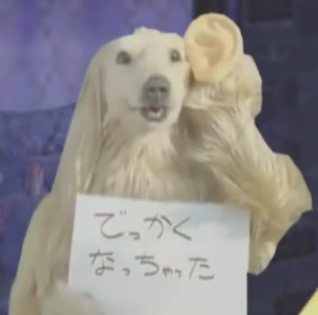