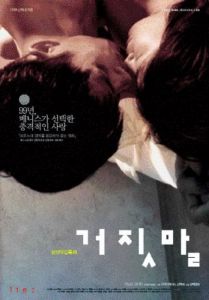 The film follows two characters, known only as "Y" and "J". "Y" is an 18-year-old female student determined not to lose her virginity by rape. So she decides to arrange a meeting with "J", a 38-year-old married sculptor, at a hotel to lose her virginity there. As the movie progresses, both of them take the relationship further, with more ways to please each other sadistically, using sticks, bats, paddles, etc.