The player can encounter various companion characters throughout their journey. 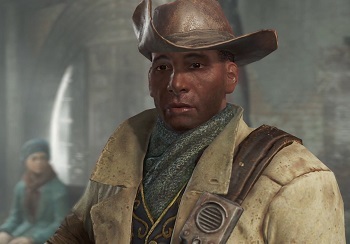 Voiced by: Jon Gentry
"Protect the people at a minute's notice... That was the idea, anyway."

A member of the Commonwealth Minutemen holed up in Concord. He was escorting a group of twenty settlers who were looking for a place to start a town, but luck wasn't kind to them - first they were chased out of Lexington by Feral Ghouls, then the Raiders at Concord trapped them in the Museum of Freedom. His only hope is a suit of T-45d Power Armor on the roof, but its fusion core is dry, and the only one close by is locked up tight in the basement...

He is a romance option for the Sole Survivor. His unique perk, "United We Stand", gives you a 20% bonus to Damage and +20 Damage Resistance when facing off against three or more enemies. 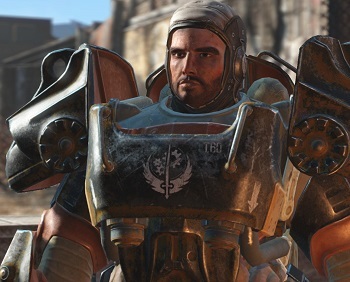 Click here to see him without his Power Armor and hat 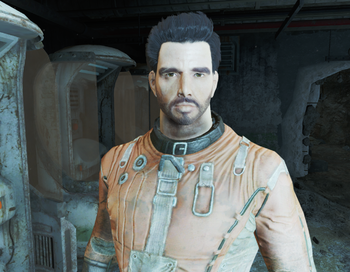 Voiced by: Peter Jessop
"Cleansing the Commonwealth is our duty, and I will gladly spill my own blood to ensure our victory."

A Brotherhood of Steel Paladin whose chance encounter with the Sole Survivor leads to an impromptu alliance. Seeing their potential, he becomes the Survivor's sponsor for joining the Brotherhood.

He is a romance option for the Sole Survivor. His unique perk, "Know Your Enemy", gives you a 20% damage buff against Feral Ghouls, Super Mutants, and Synths. 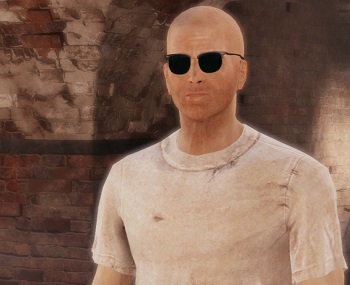 Voiced by: Ryan Alosio
"Me? Get into trouble? I am the very definition of innocence! We're just going to spend all day playing canasta. Promise."

An enigma among enigmas, Deacon is by far the most mysterious member of the Railroad, and their top intelligence agent. Theories about his past run amok in the organization — some believe that he's a Synth, some that he's secretly the organization's leader, and at least one crackpot is convinced that he's a time traveler. This isn't helped by his constant, ridiculous, and breathlessly delivered lies.

His unique perk, "Cloak and Dagger", gives you a 40% bonus to sneak attacks and a 40% duration bonus to Stealth Boys. 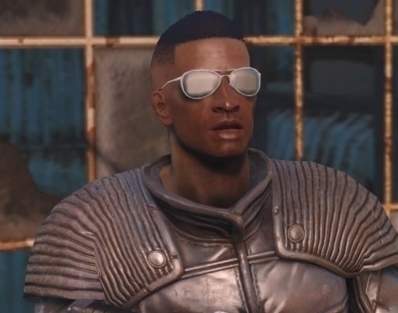 Voiced by: David Paluck
"Do I like wading through the filth that is the Commonwealth and all of its vermin? Of course not. But if that's what the Institute needs me to do, then I'll do it."

An advanced Courser-class Synth, X6-88 is among the Institute's top field agents, aiding his creators in numerous shady operations - including Kellogg's brief stint in Diamond City. Should the Sole Survivor choose to hear out the Institute's leaders upon reaching their headquarters, he will be assigned to the wayward vault dweller as a bodyguard, as a token of good faith. 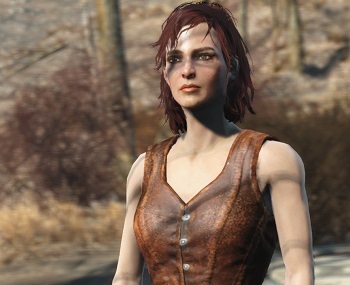 Voiced by: Katy Townsend
"Only thing better'n gettin' pissed is pickin' a fight. Am I right?"

An Irish pit-fighter and chem addict who resides in the Combat Zone. Cait has a harsh outlook on life. She is recruited after the Sole Survivor clears out the raiders in the arena and her manager Tommy, now out of a job, hands her over.

She is a romance option for the Sole Survivor. Her unique perk, "Trigger Rush", allows your Action Points to regenerate +25% faster if you are down to 25% of your Hit Points or fewer. 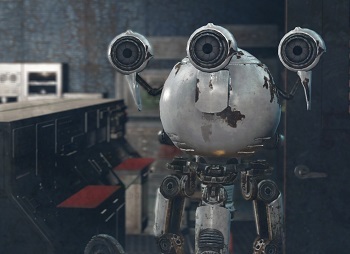 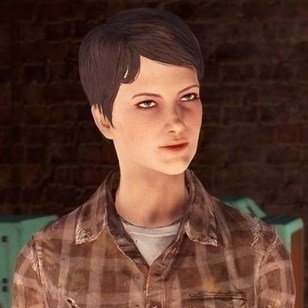 Voiced by: Sophie Cortina
"My entire life has been in this Vault. I have analyzed and learned everything there is to know here. So now I must see the rest of the Commonwealth. Consult with scientists. Unearth more data to challenge my hypotheses."

A Miss Nanny robot, Curie was a researcher in Vault 81 experimenting with mole rats infected with diseases. After helping her and the Vault, she decides to follow the Sole Survivor to learn more about the outside world.

She is a romance option for the Sole Survivor. Her unique perk, "Combat Medic", lets you heal 100 hit points once every 24 hours if your health falls below 10%. 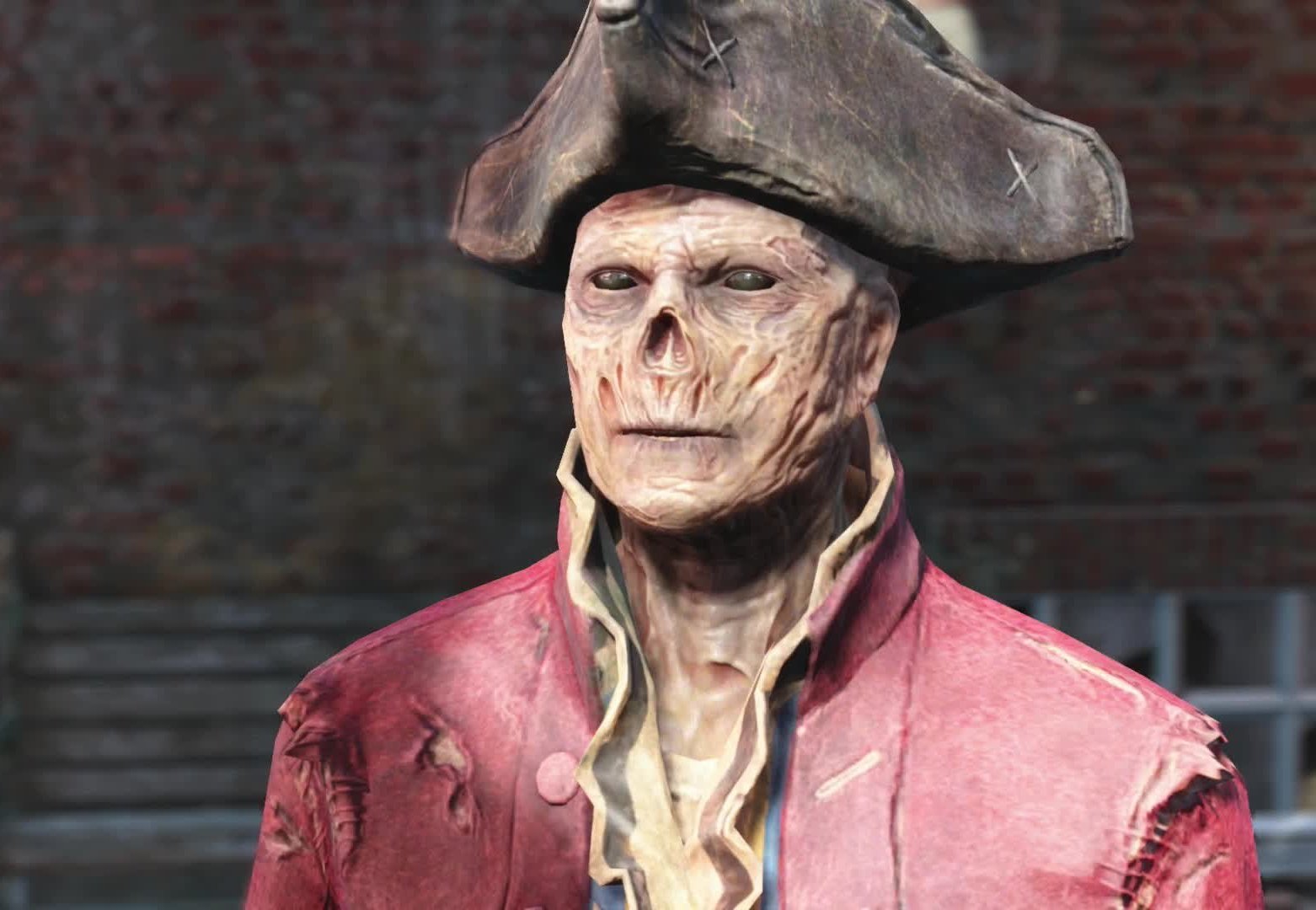 Voiced by: Danny Shorago
"Like it? I think it gives me a sexy, king of the zombies kinda look. Big hit with the ladies."

A stoner who became a ghoul after a bad trip, Hancock once lived in Diamond City, but upon its declaration to banish the entire ghoul population, relocated to Goodneighbor. After a long period living under the thumb of the town's oppressive bosses, he wound up tripping so hard he woke up in front of a museum exhibit about John Hancock. Inspired by the legendary figure, he took the name and the fashion, leading a quick revolution in the town and becoming its new mayor in the process. 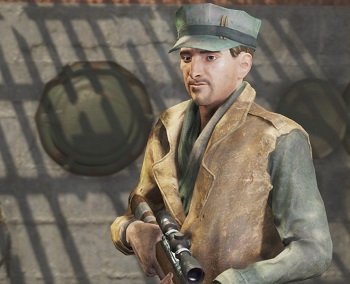 The former mayor of Little Lamplight, R.J. MacCready has come a long way since his days as the town's bratty gate guard. Since becoming a mungo and heading out into the wastes, he's married a woman named Lucy and had a son named Duncan. Unfortunately, for reasons he doesn't like to discuss with strangers, he's had to leave his family in the Capital Wasteland behind and head north, selling himself as a mercenary in the town of Goodneighbor. Nominally, he stands in for the Gunners faction as a companion, although MacCready has already cut all ties with them by time he meets the Sole Survivor.

He is a romance option for the Sole Survivor. His unique perk, "Killshot", gives you a 20% accuracy bonus to headshots in V.A.T.S. 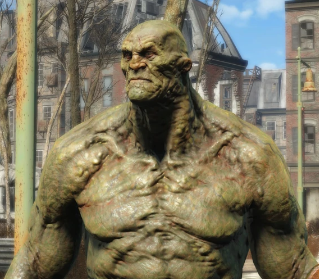 A Super Mutant from Trinity Tower who has been imprisoned by his brethren for being "different." This is due to the influence of a human intellectual, Rex Goodman, who tried to teach the Mutants culture using classic literature, starting with Macbeth. Whereas most of them laughed at the idea, Strong took it to heart... sort of. He believes that "the milk of human kindness" is a literal drink that holds the key to human power, and seeks it for himself.

His unique perk, "Berserk", gives you 20% boost to melee damage at low health. 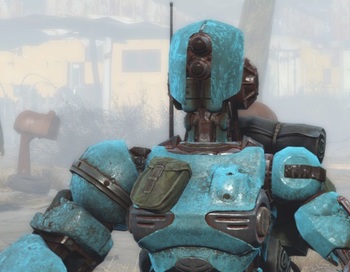 The main supporting character of the Automatron DLC. Ada is a heavily modified Assaultron built by Jackson, a mechanically-inclined caravan merchant. Like Codsworth, Curie, and KLEO, she has achieved an exceptional degree of self-awareness. After Jackson's caravan is attacked by the Mechanist's robots and everyone except for Ada slaughtered, she enlists the Sole Survivor's assistance in a quest for revenge to find the Mechanist and put an end to his reign of terror.

The selling point of the Automatron DLC, these "generic" robots are heavily customizable robot companions that you can take with you for your adventures throughout the Commonwealth and beyond. The player can also choose what type of voice they have, from a selection of a generic male voice, female voice, the voice of a Sentry Bot or Assaultron, or even make the bot communicate entirely in beeps. 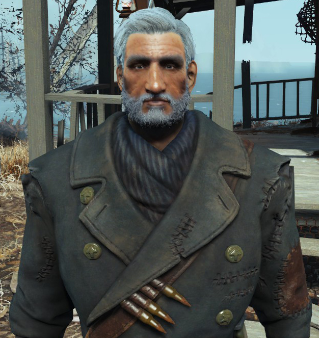 "The Fog can do a number on you. Gets you all... turned around."

A retired hunter and long-time resident of Far Harbor. He now spends most of his free time getting drunk and helping people navigate the dangers of the Island, often in that order. Looking for someone to guide them to Acadia, the Survivor finds him drinking in Mitch's Bar, and hires him as a guide. After guiding the Survivor to Acadia, he offers his services as a Companion.

His unique Perk, "Hunter's Wisdom", lowers the damage resistance of animals and sea creatures by 25%. 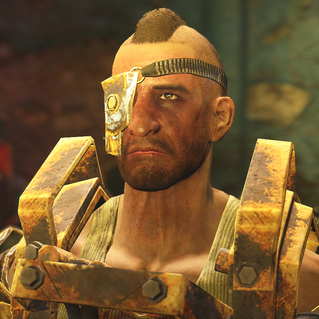 Voiced by: Mark Rolston
"You ask me, this whole damn world is here just to tear you down. Deck's stacked against you from the very beginning."

The former right-hand man of Overboss Colter. He joins the Sole Survivor after betraying Colter by helping the former kill the latter.

He is a romance option for the Sole Survivor. His unique Perk, "Lessons In Blood", raises your damage resistance by ten and gives an additional 5 percent of experience points from killing enemies.