Characters from the various settlements and factions across Fallout 4: Nuka-World. 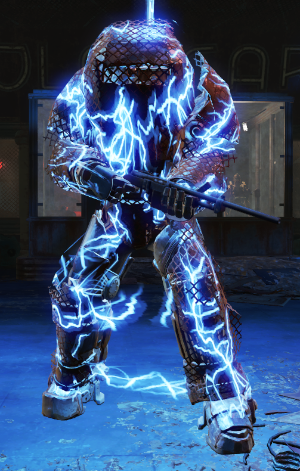 The former Overboss of the gangs in Nuka-World. Until the Sole Survivor shows up. 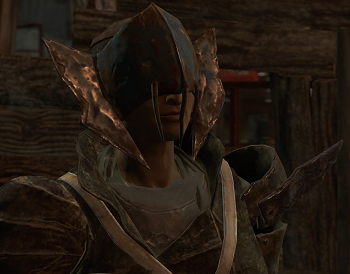 Nisha without her helmet 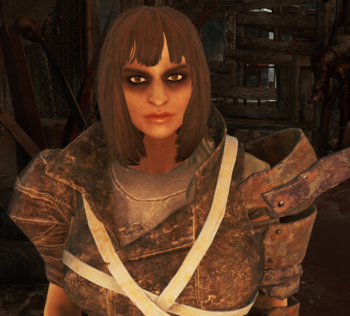 The bloodthirsty and violent leader of the Disciples, Nisha is at her happiest when she is killing. 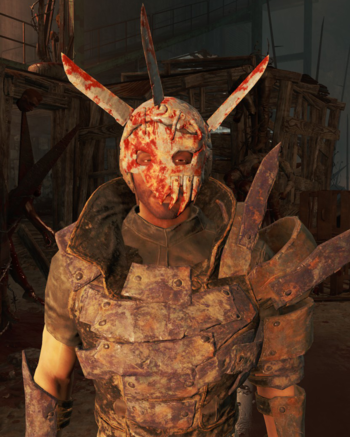 Savoy without his helmet 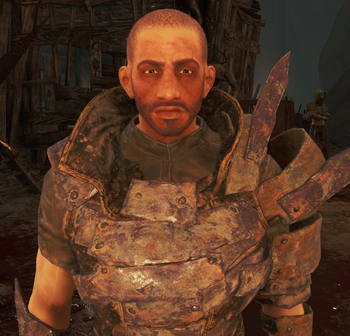 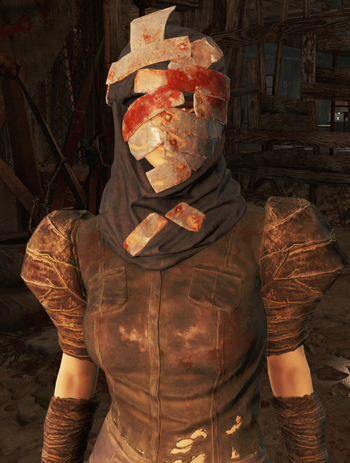 Dixie without her helmet 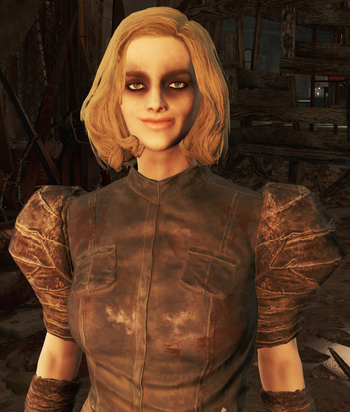 The other one of Nisha's co-dragons, who's every bit as psychotic as her boss, if not more so. 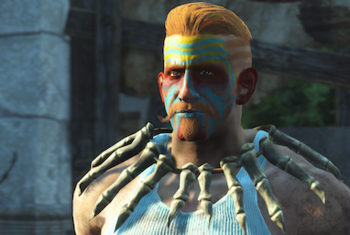 The animalistic and brutal alpha of the Pack. 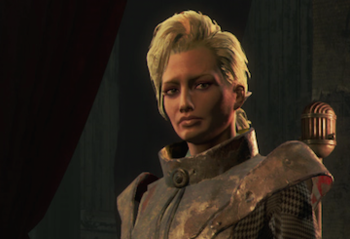 The leader of the Operators, a former Upper Stands resident from Diamond City. 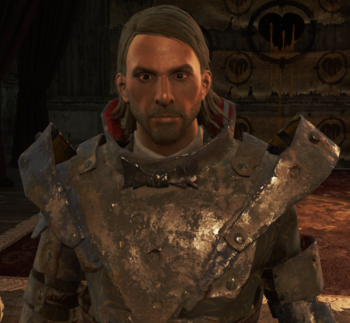 Mags's brother, and her second in command. 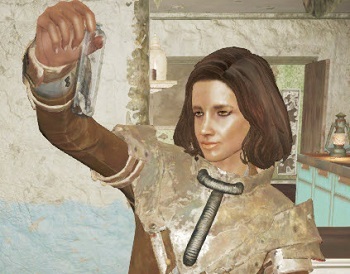 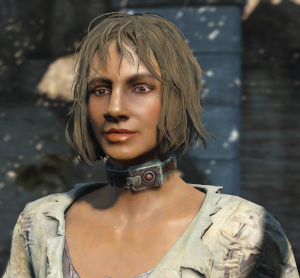 The doctor of the traders living in Nuka-World. Like all the other traders, she's been enslaved.
RedEye
Voiced by: Andrew W.K.

The guy who runs Raider Radio, the Nuka-World Radio station. Loud, boastful, casually malicious and brutally honest when he's not exaggerating for dramatic effect, he suits his listeners down to the ground. He plays spoken-word songs and offers commentary on the Sole Survivor's progress — first through the Gauntlet, then Nuka-World.

"Hey, here's a friendly reminder: sure, nobody likes the traders. But you can't kill 'em all, or else there won't be anyone around to do all the shitty work you assholes won't do. Think about it."
N.I.R.A. 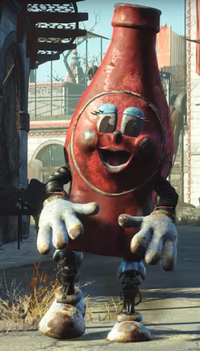 The Nuka-World Informational Robot Assistant. It is a Protectron-like robot made in the shape of a Nuka-Cola bottle that was intended as a greeter and information guide for the park. It was eventually reprogrammed by Raiders so that the normally friendly robot suddenly becomes rude at random. 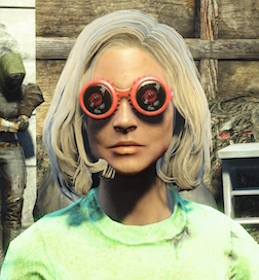 A Nuka-Cola fanatic who traveled her way from the Capital Wasteland to see Nuka-World. 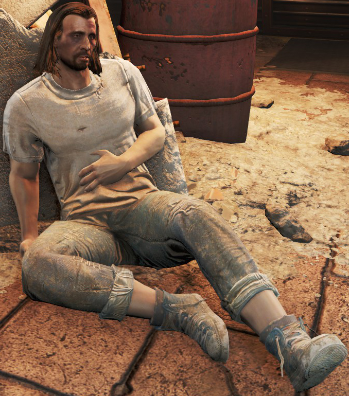 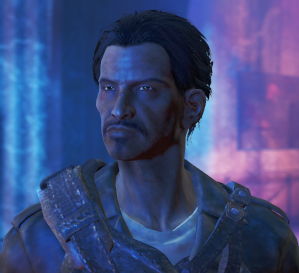 A man brought in by the Raiders to handle the Nuka-Cade.
Shank 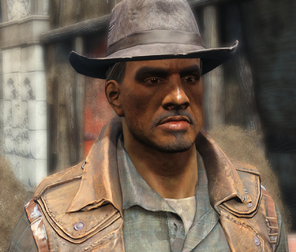 One of the lieutenants of Nuka-World, his job is to scout out settlements for the Commonwealth 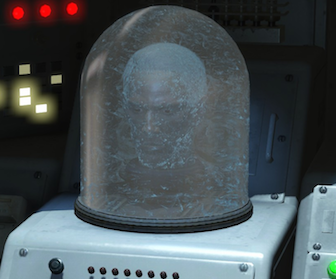 The inventor of Nuka-Cola and head of the Nuka-Cola Corporation. His still-living head is preserved in a secret vault under his office in Nuka-World, where he's been trapped since the bombs fell. 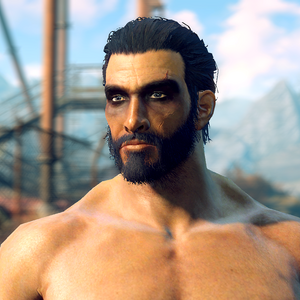 A man covered in furs who was raised by, and lives with, ghoulrillas in Safari Adventure. 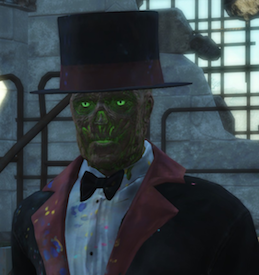 A glowing ghoul who was working as a stage magician at Kiddie Kingdom when the bombs fell. He and his surviving companions were ghoulified because of the radiation, but sadly everyone except him and his girlfriend went feral over the years and she left roughly a year ago to search out a cure for the Affliction (what they called going feral).

Oswald's girlfriend from before the war who took refuge in Kiddie Kingdom alongside her boyfriend. Originally an actor she has become a scientist in the hopes of finding a cure for the affliction turning her ghoul friends into mindless ferals. Recently she set out on a journey to accomplish this goal and hasn't returned yet.

Sam Teller
My name was Sam Teller. I ran caravans and did good, honest deals out of Nuka-World for years. I fought the raiders when they came. I led the holdouts. I was a mother and a wife and a sister and a daughter, and fuck you for taking that all away from me. - Sam's Note

A merchant woman who ran caravans in Nuka-World before the raider gangs showed up. In the end she chose to fight and die rather than become enslaved and her body can be found deep inside the Mad Mulligan's Mine roller-coaster.

A guy you meet at the outskirts of Nuka-World. Nothing much to him, but there's a reason why he's here. 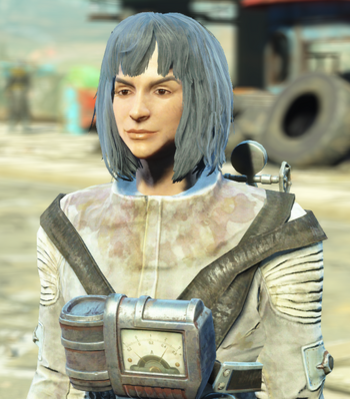 AHS-9. The leader of the Hubologist sect in Nuka-World. She and her followers are searching for a spaceship that could take them to an alien world.